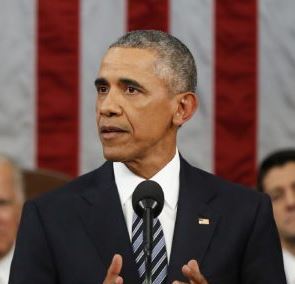 During his final (thank you God) State of the Union address, during his discussion about Islam, Obama had something to say about those who dare insult Islam:

In a swipe at some Republican presidential candidates, he warned against “voices urging us to fall back into tribes, to scapegoat fellow citizens who don’t look like us or pray like us or vote like we do or share the same background.”

Hinting at recent divisive comments by Republican presidential contender Donald Trump, who called to block Muslims from entering the US, Obama said Americans must “reject any politics that targets people because of race or religion.

“This isn’t a matter of political correctness. It’s a matter of understanding what makes us strong. The world respects us not just for our arsenal; it respects us for our diversity and our openness and the way we respect every faith…When politicians insult Muslims, when a mosque is vandalized, or a kid bullied, that doesn’t make us safer. That’s not telling it like it is. It’s just wrong. It diminishes us in the eyes of the world. It makes it harder to achieve our goals. And it betrays who we are as a country,” he said.

If I were cross-examining him, I’d ask something along these lines (and yes, I’ve been reading way too many transcripts lately):

Q: “Mr. Obama, let me make sure I’ve got this right: Did you say that prominent American politicians who make derogatory statements about Islam are demeaning themselves and our country?”

Q: “Okay. Let me just ask a follow-up here. When you stated this principle — that it’s demeaning for an American politician to make negative statements about Muslims — did you intend for that principle to apply only to Muslims?”

A: “Er, I’m not sure I understand you. Can you repeat that question?”

Q: “Let me see if I can break it down. You’re President of the United States, is that correct?”

Q: “And during a speech in your capacity as President of the United States, you said politicians should not say negative things about Muslims because ‘it diminishes us in the eyes of the world.’ When you said that, were you using the word ‘us’ to refer to politicians or all Americans?”

Q: “Can we agree, then, that you said it’s a bad thing for an American politician to say derogatory things about Muslims because it makes America look bad?”

A: “Yes, that’s what I said. I already agreed that I said that.”

Q:  “Do you believe that this principle extends beyond Muslims?”

A: “What? I don’t understand what you’re asking.”

Q: “Let me try this a different way.  Would you also agree that it’s a bad thing for an American politician to say derogatory things about people of other faiths or races, because doing so makes America look bad?”

Q: “And it also makes the politician look bad, correct?”

Q: “Mr. Obama, in November 2008, while speaking to wealthy San Francisco Democrats about people in small Midwestern towns, did you say of those Midwesterners ‘And it’s not surprising then they get bitter, they cling to guns or religion or antipathy to people who aren’t like them or anti-immigrant sentiment or anti-trade sentiment as a way to explain their frustrations.'”

Q: “Wait a minute, Mr. Obama. I haven’t asked you a question yet, other than whether those are your words. Here’s my question: Do you think being bitter is a good thing?”

Q: “Mr. Obama, have you made limiting American’s access to guns one of the centerpieces of your second term.”

A: “That’s just to keep people safe. Guns are dangerous.”

Q: “Mr. Obama, as you sit here today, are you willing to give up, this instant, your armed Secret Service protection.”

Q: “Mr. Obama, are you willing, today, right now, to tell the armed Secret Service agents surrounding your children to turn in their guns and go home?”

Q: “Mr. Obama, do you think you and your daughters’ lives are more valuable than the lives of a family living in the South Side of Chicago? Or in South Central L.A.? Or in Detroit?”

Q: “Are you saying, Mr. Obama, that it’s safer to live in ‘Chiraq’ or South Central or Watts than it is to live in the White House?”

A: “I don’t understand where you’re going with this.”

Q: “Let me explain. You’ve made it clear that you think Americans should not be trusted with guns, except for those armed Americans who provide a protective ring around you and your family, is that correct?”

INTERROGATING COUNSEL: “Objection duly noted. Mr. Obama, judging by your actions, your philosophy is that most people are dangerous and shouldn’t have guns. So when you describe Midwestern conservatives as people who cling to guns, that’s not meant as a compliment, is it?”

Q: “What were you going to say, sir? That they’re not smart enough to know what will really keep them safe? Is that what you were going to say?”

Q: “Next question, Mr. Obama. In the same sentence, you characterized the same people as being religious.  When you raised ‘religion’ in the same context as bitterness and guns, you were not using being religious as a compliment, were you?”

A: “I was just saying that people who take religion too seriously can be a problem.”

A: “ISIS is not religious. That’s not Islam.”

Q: “Focus, Mr. Obama.  Were you saying that Midwesterners are dangerous, embittered Christians?”

A: “You’re putting words in my mouth.”

Q: “No sir. I’m actually listening to the words that issue from your mouth. Is it now fair to say that, when you talked about those bitter religious clingers, you were making a demeaning remark about Christians?”

Q: “Moving on. Mr. Obama, on February 5, 2015, did you state ‘Unless we get on our high horse and think this is unique to some other place, remember that during the Crusades and the Inquisition, people committed terrible deeds in the name of Christ. In our home country, slavery and Jim Crow all too often was justified in the name of Christ’?”

A: “Yes, I did, but if you pay attention, I also said bad things were done in the name of Islam.”

Q: “Agreed, Mr. Obama. My question for you, though, isn’t whether you said ISIS was abusing Islam. My question is this: Did you state that Christians have used their God to murder, torture, enslave, and disenfranchise people?”

Q: “I’m not asking what you meant. I’m asking whether you said something demeaning to Christians. Did you?”

Q: “So, Mr. Obama, when you testified earlier that you were referring to all religions, not just Islam, when you said of politicians who insult Muslims that ‘It diminishes us in the eyes of the world,’ you were lying weren’t you?”

Q: “Really? Mr. Obama, we have you on record at least two times leveling insults as Christians. Either you don’t believe doing so diminishes you and America in the eyes of the world, or you just don’t care whether or not it does. Which is it, Mr. Obama?”

Barack Obama, whether he will admit it or not, keeps the sharia code:  You can insult Christians and Christianity with impunity, but you’d better not insult Islam or Muslims.  And that, my friends, is an utterly inappropriate sentiment for an American State of the Union address.