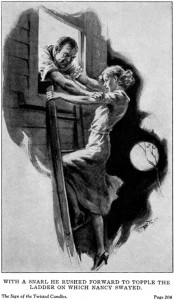 The Hollywood Reporter has an article announcing that in the reboot of Nancy Drew, the eponymous main character won’t be Caucasian:

CBS’ new Nancy Drew will look very different should the network move forward with the reboot.

CBS Entertainment president Glenn Geller revealed Tuesday that the network’s reimagining of the iconic character will be diverse.

Fine.  Nancy Drew was not meant to be great art.  She was written by a series of different authors to sell books.  The most important part of Nancy Drew isn’t the golden hair and blue eyes that the original books assigned to her, but instead the fact that she’s clever, independent, intrepid, and spunky.  Those qualities can and should exist irrespective of race.

So no, I have no problem with a non-white Nancy Drew.  What I have a problem with is stupidity.  Today’s dollop of Hollywood Leftist stupidity comes from Glenn Geller, explaining his thinking:

“She is diverse, that is the way she is written,” the executive told THR immediately following his time in front of the press at the Television Critics Association’s winter press tour Tuesday. While Geller said it was too early in the process to explain just what he meant by diverse — whether Nancy is African-American, Asian-American or Latino, he said it would hinge on finding the right actress for the part. “[She will] not [be] Caucasian,” he stressed. “I’d be open to any ethnicity.”  (Emphasis mine.)

Excuse me, Mr. Geller, but I think you’re a little confused.  Once you’ve “stressed” that “[She will] not [be] Caucasian,” are you really in a position to state in the next breath that “I’d be open to any ethnicity”?  I think not.  Apparently there’s one ethnicity to which you’re absolutely closed.