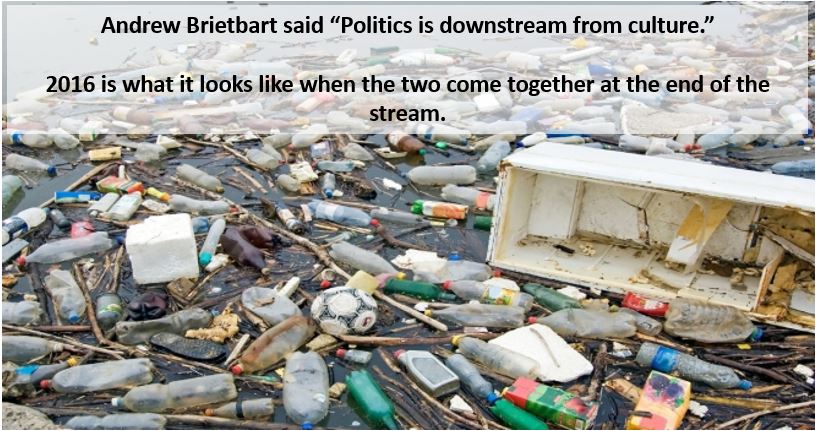 Victor Davis Hanson says that conservatives who look askance at a Trump candidacy needn’t get their knickers in a twist, because he’s no worse than anyone else in our political class, going all the way back to the 1960s. Hanson had the examples (lots of them) to prove it.

When it comes to sexism and womanizing, Trump is just a more honest version of John Kennedy or Bill Clinton.

Subtle encouragement to violence?  Trump doesn’t differ from, unless he’s much milder than, Barack Obama gleefully telling his fans to bring guns to knife fights or to punish their enemies.

Fawning over his own genitals? Hey, Lyndon Johnson got there first (and added actual exhibitionism into the mix).

Flip-flopping on Planned Parenthood’s virtues versus its vices? Well, Trump is still better than Justice Ruth Bader Ginsburg’s open, and un-punished support for race- and class-based eugenics (“Frankly I had thought that at the time Roe was decided, there was concern about population growth and particularly growth in populations that we don’t want to have too many of.”)

And really, no one can top Obama when it comes to being openly boastful about his supposed virtues. Obama the Messiah was going to stop the rise of the seas and cool the planet. Meanwhile, Obama the politician knew that he was the best. “I think I’m a better speechwriter than my speechwriters. I know more about policies on any particular issue than my policy directors. And I’ll tell you right now that I’m gonna think I’m a better political director than my political director.”

What’s striking about Hanson’s quite long article comparing Trump’s apparent excesses is that, subject to a single exception, all of the people who have been more boastful, more violent, more amoral, more sexualized, and more exhibitionistic than Trump . . . are Democrats. The single exception that Hanson pulls up is Reagan:

Trump supposedly is inciting violence by creating a climate of violence at his rallies. But did he say, or was it Ronald Reagan who said, at a time of widespread unrest, “If it’s to be a bloodbath, let it be now. Appeasement is not the answer”? Reagan called not for a punch or two but for something rather more existential.

(One can view Reagan’s remark as a philosophical expression, but it’s also an acknowledgment of the violence that always lurks behind politics — a violence that America had managed to keep out of the actual presidential election process pretty much since Jackson’s time.)

The prevalence of Democrats on the laundry list of bad acts got me to thinking. Ever since Carter, Republicans have prided themselves on being the classier party. Carter was an uncouth peanut farmer (never mind his Annapolis degree and naval background). Bill Clinton was a good ole boy who, when asked whether he wore boxers or briefs, instead of politely freezing out the question, cheerfully answered it. (For those who don’t remember, the answer was briefs.) Given how déclassé the man from Hope was, it really didn’t come as a surprise that his administration came to be characterized by sexual excesses, graft, and all sorts of other trashy behaviors.

Obama, of course, is in a class (or lack of class) by himself. We’ve come to a point in popular culture where it’s considered to be awesome, not embarrassing, that the first couple do fist bumps; that Obama looks “for whose ass to kick;” that Obama characterizes the leader of the Middle East’s only democracy as a “chickenshit;” that our president blames European leaders for his own leadership vacuum; that the First Lady uses venerable rooms in the White House for workouts; that the first couple routinely invites to the White House pop culture performers who advocate violence against police officers and denigrate women; that the president “slow jams” on talk shows; and that the first couple assumes it’s the job of overburdened taxpayers to fund their lavish vacations and nights out on the town.

For a long time, Republicans could claim that their leaders were more polished and sophisticated — that is, they had about them a decorum that was consistent with leading the world’s most powerful nation. Reagan and the Bushes weren’t routinely dropping trou, speaking about lusting after women, ostentatiously partying on the public’s money, loudly insulting other nation’s leaders, or otherwise behaving like people who have never had contact with dignity or decency.

, Republicans nodded sagely upon learning that, with the exception of the paranoid Richard Nixon (although Pat Nixon was lovely), Democrat presidents and their families were boors to the Secret Service agents who protected them, while Republican families were polite and thoughtful. It wasn’t about money; it was about class — Republicans had it and Democrats didn’t.

But as Andrew Breitbart said, politics is downstream from culture. Beginning in the 1960s, with the Left’s cultural ascendancy, American culture has becoming staggeringly debased, and that downward rush to the gutter has accelerated with every passing year. The retreat from decorum is a Leftist movement. Conservatives were happy with Leave It To Beaver or Father Knows Best. Leftists brought us All In The Family and Maude. It wasn’t conservative churchgoers who promoted Katy Perry’s “I Kissed A Girl And I Liked It.” Conservatives weren’t attending Madonna’s increasingly debauched shows or applauding Miley Cyrus’s fluid sexuality and compulsive exhibitionism. It was the Left that kept pushing the envelope, moving sex and drugs to the center of our cultural life.  Had the right controlled culture, we wouldn’t have pot as the most used drug in America, condom vending machines in middle schools, and free gender reassignment surgery for enlisted men and women.

Given the cultural push from the Left, it’s scarcely surprising that the two most recent presidents from the Left — Clinton and Obama — openly reflect that culture. Clinton was all white trash and sexual excess. Obama has avoided the sexual excess, but keeps trying to prove his black ghetto credibility. Clinton and Obama have played, not only to their political base, but to their cultural base.

Of course, once a culture shifts, it shifts. Kevin Williamson stirred up a storm when he said that white Americans — from working class, to lower class, to middle class — are not deserving of too much sympathy. Instead, he says, they are people who have embraced bad lifestyle habits and have refused to relocate to escape permanently broken economic ghettos. The article is behind a paywall, but I’d like to quote from it briefly:

The white middle class may like the idea of Trump as a giant pulsing humanoid middle finger held up in the face of the Cathedral, they may sing hymns to Trump the destroyer and whisper darkly about “globalists” and — odious, stupid term — “the Establishment,” but nobody did this to them. They failed themselves.

If you spend time in hardscrabble, white upstate New York, or eastern Kentucky, or my own native West Texas, and you take an honest look at the welfare dependency, the drug and alcohol addiction, the family anarchy — which is to say, the whelping of human children with all the respect and wisdom of a stray dog — you will come to an awful realization. It wasn’t Beijing. It wasn’t even Washington, as bad as Washington can be. It wasn’t immigrants from Mexico, excessive and problematic as our current immigration levels are. It wasn’t any of that.

Nothing happened to them. There wasn’t some awful disaster. There wasn’t a war or a famine or a plague or a foreign occupation. Even the economic changes of the past few decades do very little to explain the dysfunction and negligence — and the incomprehensible malice — of poor white America. So the gypsum business in Garbutt ain’t what it used to be. There is more to life in the 21st century than wallboard and cheap sentimentality about how the Man closed the factories down.

The truth about these dysfunctional, downscale communities is that they deserve to die. Economically, they are negative assets. Morally, they are indefensible. Forget all your cheap theatrical Bruce Springsteen crap. Forget your sanctimony about struggling Rust Belt factory towns and your conspiracy theories about the wily Orientals stealing our jobs. Forget your goddamned gypsum, and, if he has a problem with that, forget Ed Burke, too. The white American underclass is in thrall to a vicious, selfish culture whose main products are misery and used heroin needles. Donald Trump’s speeches make them feel good. So does OxyContin. What they need isn’t analgesics, literal or political. They need real opportunity, which means that they need real change, which means that they need U-Haul.

Williamson is mad and his language intemperate, but he’s got a point. The culture that used to characterize the giant middle of America — drug-free, married before children, hard-working, willing to move for jobs, tough, self-sufficient, self-reliant, freedom oriented — is gone. Sure, all over America there are pockets of this old ethos remaining, but it’s dying out.

In this regard, keep in mind how often I’ve told you about my “in” into a seriously poor community, thanks to a close friend whose life sees her living amongst the very white people Williamson describes.  Subject to one exception — an alcoholic Native American who grew up in the dysfunctional world of a reservation — the people in this community have remarkably similar backgrounds and behaviors.

Their upbringings are white working class. They are all the products of married parents. Some of their childhood homes were more dysfunctional than others, but all still had the patina of the old American ethos.

In addition to the sameness of their upbringings, there’s also a sameness to the choices they’ve now made:  They’ve never married or they have revolving door marriages, the women’s children are not being raised by the children’s father(s), alcohol, pot, and harder drugs are a constant without which they wouldn’t consider life worth living, welfare (cash payments, food stamps, church charity, etc) is a perfectly reasonable alternative to the rigors of paid work, and because paid work is low on the scale of desirable things to do, when this community suffered economically during 2008, not a single person moved away to find employment.

The same holds true when it comes to political lies (“everybody lies”), the failure to indict Hillary for appalling crimes (“prosecutors are corrupt and as long as I keep a low profile, I can get away with most crimes and frauds”), and threats of violence (all the men, and some of the women, have had run-ins with the law for fighting). For much of the new American middle, lies, crimes, and violence have become ordinary. We’re not living the Beaver Cleaver life anymore. Our world — the lower middle and working class world — is Mad Max all the way.

And so we end up with Donald Trump. Victory Davis Hanson is absolutely right that he’s no worse than what the Left has given us when it comes to political class. It’s just that old-timers — and I include myself in that group — have these daft, old-fashioned notions that the men and women who represent America to the world should reflect the best of what we are (or were) not the worst. But Leftist culture eventually washes over everything, including those church-going Evangelicals who hold themselves to high moral standards but who have up expecting the same from their political leaders.

Politics is downstream from culture . . . and our culture and our politics have managed to flow downstream into the sewer, together at last.