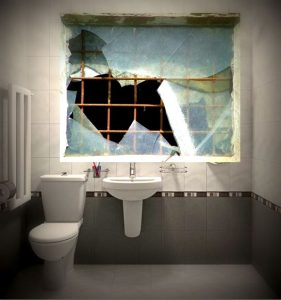 The social justice warriors have been busy on my “real-me” Facebook page, ridiculing the concerns of ordinary Americans who cannot understand why, out of the blue, they are suddenly being told that gender isn’t a biological reality but is, instead, a mere social construct that a person can socially reconstruct on a daily basis — and, moreover, that this sudden gender fluidity means that it’s an act of gross discrimination to contend that public bathrooms should be limited to reflect a person’s basic biology (i.e., penis or no penis).

Despite disagreeing strongly with the whole “gender fluidity” claim, even I must admit that the social justice warriors have come up with what I consider are two good arguments to support their case. Conceding that these arguments have some validity, though, does not erase the fact that the SJWs are still completely wrong to demand that America abandon long-standing laws and practices respecting gender differences.

The first valid argument is that true transgender women (by which I mean people who completely identify as women but who are biologically men) are almost never violent towards others: 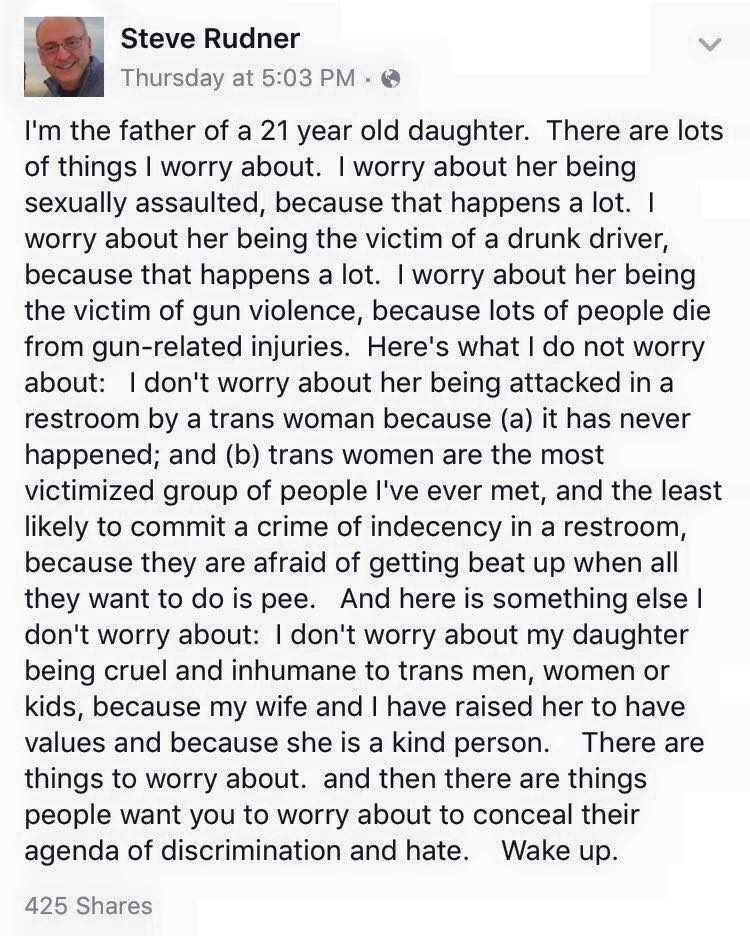 The second argument is that these true transgender women, the ones who dress and act like women, often to the point of being indistinguishable from women, are already using women’s restrooms and have been doing so forever, without anyone being the wiser:

I’ll add one more argument:  Long before the bathroom wars heated up and women suddenly got concerned about men in their bathrooms and locker rooms, sexual perverts have been trolling women’s bathrooms:

So, if true transgenders aren’t violent, if this bathroom sharing has been existing sub rosa forever, and if perverts have been using women’s bathrooms long before transgender rights became an issue, why do I still believe that it’s important that we continue our current biologically-based gender segregation in bathrooms and changing rooms? It’s important because of what I think of as the “broken windows” theory of public bathrooms.

The “broken windows” reference, obviously, goes back to a 1982 article that social scientists James Q. Wilson and George L. Kelling wrote for The Atlantic about lowering America’s staggeringly high crime rates following the lackadaisical law enforcement in the 1970s that the hippies and their enablers insisted upon across America’s urban landscapes.  The “broken windows” theory was simple: if police forces ignore little crimes, that practice begets big crimes. Or, as Wilson and Kelling explained, think of a building with a broken window that doesn’t get fixed:

Consider a building with a few broken windows. If the windows are not repaired, the tendency is for vandals to break a few more windows. Eventually, they may even break into the building, and if it’s unoccupied, perhaps become squatters or light fires inside.

During the 1990s, New York Police Chief Bill Bratton, with full support from Mayor Rudolph Giuliani, implemented a “zero tolerance” policy in New York. Once zero tolerance went into effect, with the NYPD aggressively attacking small crimes (littering, vandalism, “squeegee men,” fare jumpers, etc.), big crimes in New York dropped. Those who believed in the “broken windows” theory of policing claimed that this drop resulted from the new policy. However, those who hated the fact that zero tolerance came down heavily on minorities (ignoring the fact that, before zero tolerance, both the perpetrators and victims of big crimes were primarily minorities), insisted that correlation was not causation. They believed, instead, that significant drop in the major crimes that plagued New York resulted from an overall drop in crimes across America.

Me? I agree with the broken windows theory, because it’s just a fancy restating of a principle that has existed forever amongst those with any knowledge at all when it comes to human nature.  Just think of all the old expressions we routinely use to describe the human habit of giving naughty things a try and, if that try works, escalating that naughtiness:  “Give ’em an inch and they’ll take a mile.” “That’s a slippery slope.” “Once you let the camel’s nose into the tent….” Human nature is such that, if we realize we can get away with a little, we’ll start trying to get away with a lot.  Moreover, we know that little things can end up creating big differences.  (“For want of a nail….”)

This same principle — which I think of as “don’t make it easy for the bad guys” — holds true for perverts and women’s facilities. Society currently has drawn a bright line: “Men (meaning people with the objective indicia of the male sex), you stay out of women’s bathrooms, locker rooms, and changing areas.”

While this long-standing rule doesn’t keep all of the perverts out, it most certainly doesn’t encourage them to come in. The proposed new rule, however, which advertises that “Gender is a meaningless societal construct so that you can go wherever the heck you feel you belong,” encourages perverts. It’s a broken window. It says that it’s okay for you, the man with evil acts in his heart, to be there in the stall next to the little girl or stripping off all your clothes in the center of the women’s locker room.

Put another, if the SJWs have their way we will be forced across America, in every public bathroom or changing room, to allow the camel’s penis into the women’s tent. Once you’ve started down that road, you can bet your bottom dollar that low-end perverts who were deterred by a “no men” sign, will feel that a “whatever you are today” sign is an invitation to ever more extreme behavior.

The best thing to do is to continue as we’ve been doing, which is something akin to a “don’t ask, don’t tell” policy. If you give every sign in appearance and behavior that you’re a woman, no one is going to get their knickers in a twist if you show up in the women’s restroom.  If you start behaving in any way that’s inconsistent with being an ordinary heterosexual women who’s in the bathroom to use the facilities — that is, if you’re manifestly there for sexual gratification — out you go, and that’s true whether you’re a male pervert, a trans whatever, or a lesbian looking for thrills (yes, women can rape women).

When there’s a chronic issue in a school or prison bathroom (and male rape is a terrible, endemic problem in prisons), the authorities should create one gender-neutral bathroom for voluntary use.  Or in a school, for example, the school can authorize the transgender kid to use the single-use staff bathroom.

Yes, in the latter example the trans kid is being treated slightly differently from biological females or males, but it’s a reasonable accommodation. Nothing in the Constitution insists that the vast majority of Americans (and I do mean “vast,” by about 98%) must be grossly incommoded to accord perfect equality to an infinitesimally small number of people with gender identity issues.

One last aside: For those who wonder why the Left’s latest battle, which has been simmering for years with all those transgender prom kings and queens, is against biological gender definition, my theory is that this is just a continuation of the Left’s long-standing war against the Judeo-Christian religious tradition in the West. When the gay marriage issue first came to a head in 2008, I predicted that it would be used to trample Christians and, once the Supreme Court approved it, to destroy the First Amendment’s religious protections. So far, I’ve been right on the money.

Having won the marriage battle, the Left is now trying to undermine one of the Bible’s most ancient requirements, which is that moral societies must recognize, and never blur, the distinctions between men and women: “The woman shall not wear that which pertaineth unto a man, neither shall a man put on a woman’s garment: for all that do so are abomination unto the LORD thy God.” (Deuteronomy, 22:5.)

One can argue whether the Biblical proscription was limited to religious garments (the men’s prayer shawls and phylacteries) or to all clothing, but it’s clear that the Old Testament, starting with God’s creating Adam and Eve, considers men and women to be separate and distinct, and thinks they ought to stay that way for identification purposes. It’s therefore logical for the anti-religious Left to argue that the Bible is wrong — and if this means that the self-styled “reality-based” and “science-oriented” community has to ignore basic biology, so be it.