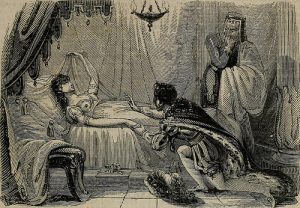 You know what those of us who are not opera fans really hate about opera? We hate the fact that, after the heroine has been dealt the fatal blow, it still takes her another half hour of frantic soprano singing before she dies. I suspect that the attenuated operatic death scene will be an apt metaphor for the last 27 days of America’s 2016 election cycle. Trump and his supporters are still singing as loudly and as strongly as they can, but the death-blow has already been dealt.

You see, it’s become very apparent that the American media has been sitting on information that might have affected the outcome of the Republican primaries. Had the media been genuinely interested in reporting the news and/or in ensuring that each party offered its finest candidate to the American people, the stories of Trump’s behavior towards women would have been in the news during the peak of the primary season.

The media, however, was not interested in serving America and its democracy. It was interested only in ensuring that Hillary, the most corrupt, incompetent person ever to run for president, would be facing the most vulnerable candidate possible. So, during the primaries, the media gave Trump all the airtime necessary to build him up and now it’s again giving him all the airtime necessary . . . only this time it’s releasing a steady stream of deadly poison that is the equivalent of the poison the precedes the last half hour of the soprano’s tragic, but lyrical, end.

Scott Adams, who has called the election with remarkable acuity, believes that this carefully planned coup (my phrasing, not his) means that the election is over and that Hillary wins:

If the latest groping/kissing allegations against Trump hold up – and I assume they will, based on quantity if not credibility – it won’t matter what Wikileaks says about Clinton. She will win easily.

Hillary Clinton is all yours, ladies. She and her alleged rapist husband are your brand now. Wear them well.

The same female cohort that brought us the scandal-ridden Warren G. Harding administration is on the verge of bringing us a Hillary administration that is mired in scandal even before it begins. I am, as I often have been in the last two decades, incredibly embarrassed to share XX chromosomes with so many morons.

Charlie Kirk’s hypothesis about millennials forces one to reach much the same conclusion about them that Adams reached about women:  The young Bernie supporters who cannot get excited about Hillary have been trained like Pavlov’s dogs to get excited about accusations of men engaged in sexual misconduct. While they wouldn’t vote for Hillary, now that she fits into their hardwired victim algorithm, they will turn out in droves to punish Trump.

Two other things lead me to believe we’re in the last half-hour of an opera that ends with all the good people scattered about dead on the stage:

The fix is in. The soprano is already dead. She just doesn’t know it.

The next four years will set us on a path the effects of which will last decades and from which we may never recover:

The Supreme Court will be hard Left, meaning that the Constitution is a dead letter. A dead letter Constitution means no more religious freedom, no more free speech, no more freedom of assembly, no more Second Amendment rights, no more due process rights . . . all of it will be gone. America will be under a totalitarian rule that melds the worst American college campuses, where speech, assembly, religious rights, the right to bear arms, and due process are gone, with the South Side of Chicago, where the early death of the Second Amendment has already established criminal control over the streets. Sometimes the criminals will be employees of government agencies such as the IRS, EPA, FDA, DOE, etc., all of whom Obama has conveniently armed more heavily than the Marines, and sometimes the criminals will be your ordinary street psychopath. Regardless of their origin, we’ll be just as dead or cowed.

The fact that a corrupt FBI and DOJ gave Hillary a pass for gross, explicit, intentional violations of America’s national security laws, and that she then got rewarded with a all-expenses paid trip to the White House, means that the rule of law is dead in America. Absolutely nothing distinguishes us anymore from a banana republic.

Our medicine will be socialized. Moreover, because we’re $19 trillion in debt, and there’s no other American government to provide additional funding as America did for Europe during the Cold War, we won’t pass through the pleasant French or English experience in which people boasted about their access to doctors (never mind that they had consistently worse outcomes than in America). With our debt, we’re going straight to Venezuela. Stock up on those vitamin pills, people. You’re going to need them.

Euthanasia will become official government policy. When your medicine is Venezuela-level, it’s much cheaper and more effective to kill people than to try to treat them. An added benefit is that dead people don’t complain.

The rich and the upper middle classes, and then the middle classes, will be taxed into oblivion (with careful exemptions cut out for the people and corporations, such as the social media giants and Goldman Sachs, who provided the ideological muscle and the funding for Hillary’s ascendancy). In the first year those taxes are in effect it will look sweet, because America’s coffers will get a temporary boost. After that, the money will be gone. The taxed people will be wrung out, and there won’t be enough wealth left in the economy to trigger the creation of new wealth. And again, unlike the Cold War era, when American cash absorbed the worst of Europe’s socialized tax rates for forty-plus years, there will be no America to make up the difference. Again, hello, Venezuela!

The La Raza crowd will probably get what it wants:  The entire American Southwest, and California of course, will once again revert to being extensions of Mexico.

Our military will continue on its path to rid the world of climate change and to ensure social justice for all except white people, especially white males. Within a few years, the US military won’t be able to take out Tonga should Tonga decide to attack.

Europe, without an America on which to rely, will go two ways:  Either full Muslim or it will fall into violent religious wars of the type that devastated huge swaths of Europe in the 16th and 17th centuries.

As Russia is already demonstrating, without an American deterrent, it will control the entire Middle East, including Middle Eastern oil. Moreover, even though Middle Eastern oil is becoming more expensive to unearth, Hillary’s administration will put the kibosh on all American fossil fuel drilling. Thus, despite sitting on oil reserves that can last for generations, we will be more dependent than ever on Islamic theocracies, with the added punch that Putin will get a cut. Russia will also extend its control once again over Eastern Europe and perhaps Central Europe. Western Europe, either a Caliphate or a battlefield, will not be worth Russia’s effort.

China, too, will go to town without an American deterrent and will control the entire Asian Pacific. Citizens of the Asian Pacific region will not be happy.

Things will get really interesting if China and Russia end up in a hot war for world domination. I don’t think either would have second thoughts about total warfare of the type moral nations such as Israel and America have avoided since WWII.

The fact that the sane constitutionalists among us will have “I told you so rights” will be scant consolation. At the end of the day, all we can do is echo Candide:  “All that is very well . . . but let us cultivate our garden.” (With said garden possibly providing the only food available to us.)

I am not sanguine.

UPDATE: A good night’s sleep helped reset my mood, and I am ready again to berate people into voting for Trump regardless of his sins. This may well be the last chance traditional, patriotic Americans (no matter their race, creed, country of national origin, sex, sexual orientation, whatever) can make their voices heard, and they should do it loudly and clearly. When we do so, we’re electing, not a man, but a set of core American values that we want to see in our lives and in our children’s and grandchildren’s lives.