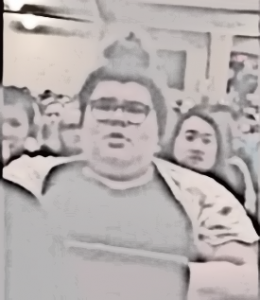 One of the cultural concerns that may have undone Hillary Clinton is the way in which America’s college campuses foster immaturity in the young adults consigned to their care. Parents used to send their children to college as a step on the road to responsible adulthood. Nowadays, thanks to safe spaces, trigger warnings, and microaggressions, it seems as if little distinguishes college students from toddlers in preschool. A recent video about special snowflakes nicely sums up what’s happening to our young people:

College snowflakes are easy to notice (and to ridicule), but the reality is that the entire statist wing of American politics is locked into immature behaviors, ranging from the terrible twos to the equally terrible teens. There was, therefore, an element of truth to Michelle Obama’s icky little boast to Oprah (queen of emotional navel-gazing) that Barack is the grown-up in the White House, modeling mature behavior, and the rest of us in America are the kids looking up to him for help and guidance. Actually, someone made a pithy poster of Michelle’s core messages: 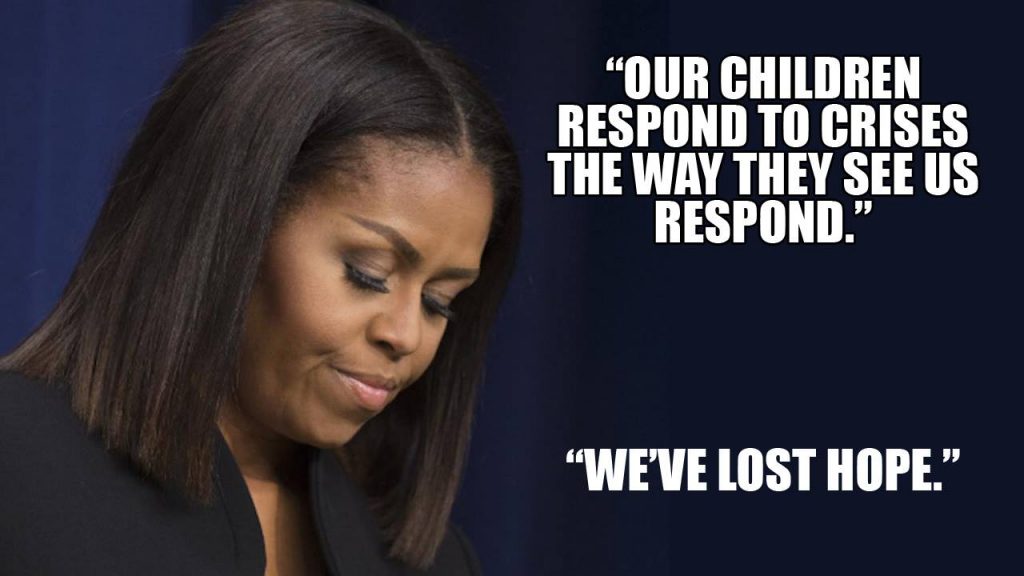 To the Progressives, Barack may indeed be the “grown-up,” but he’s only the “grown-up” in the way the bossiest child in a group of five-year-olds is the “Mommy” or “Daddy” when the kids decide to play house.

I’ve compiled a list of Progressive behaviors and thought patterns that are indistinguishable from infant, toddler, child, and teen behavior and thought patterns. See what you think and then tell me where I’m wrong or add more if you notice I’ve forgotten something.

1. Toddlers and Progressives are obsessed with poop. It’s the rare toddler who doesn’t become fascinated with poop — they withhold it, they dot it around the house, they refuse to put it in the potty, and sometimes they even like to treat it like silly putty. If you do a search for “toddler playing with poop,” you’ll pull up endless sites in parents seek help for this problem or professionals try to explain it away. One therapist who has a blog aimed at offering parenting help has this to say:

That therapist is right to be worried about late-stage poop-smearing. The only parents I know who struggled with this had children who were severely ill, either with physical or neurological problems or with dangerous personality disorders.

And speaking of dangerous personality disorders, what is the Progressive party without its poop obsession? It’s been over a year since I wrote my magnum opus on the Left’s poop obsession, so I won’t repeat it here. However, if you want evidence that the Left can’t get enough of the stuff (spreading it around, speaking about it, drawing it, etc.), check out my oild post. Or maybe just appreciate a couple of photos from the poop faction during the 2008 election and the Occupy Wall Street protest: 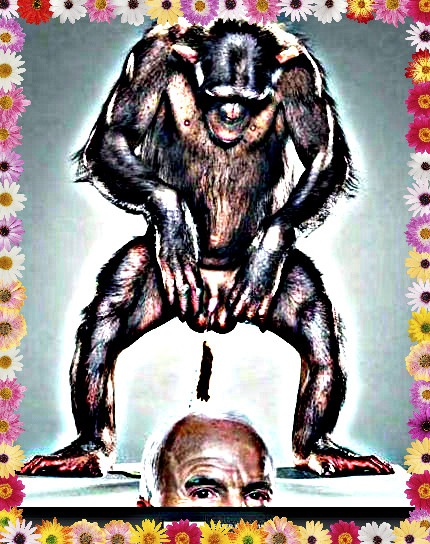 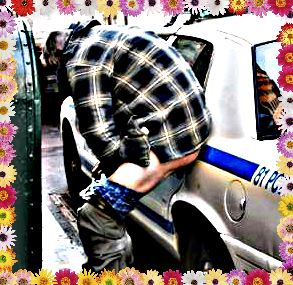 2. Toddlers never lose gracefully. Anyone who has raised children knows that one of the hardest skills to teach them is how to be a good loser. This is another issue that, if searched, yields endless articles about parents struggling to teach their children not to break things, throw board games across the room, hit people, bit people, call people names, blame Russians, etc., when they lose. Indeed, one of the hallmarks of a child’s growing maturity is the ability to handle loss gracefully in a competitive environment.

Do I need to repeat for you the endless cascade of tears, accusations, cheats, and manipulations that have become the Progressives’ hallmark in the weeks since the election? Well, I won’t repeat it all, but I do have a few videos of my favorite temper tantrums over the years:

The ne plus ultra of all Progressive tantrums, of course, is the massive meltdown we’ve witnessed since the election. These are people without any control over their emotions or their behaviors — just like babies and toddlers. This post about Hillary’s and her friends’ election night meltdown is instructive, since it’s a microcosm of the entire Progressive collapse.

As for Progressives, the earth’s climate has been relentlessly changing for 4.5 billion years. But none of that change happened because Progressives didn’t see it happening. The only change that happens is here and now. No wonder the earth’s natural cycle frightens them so much.

4. Taking their marbles and going home. “I hate you! You cheated! I’m taking my marbles and going home.” Who doesn’t remember that stage of their own or their children’s childhood? It’s a very specific sub-part of the inability to lose gracefully. Not only are you going to be miserable, but you’re going to ruin it for everyone else.

The Progressive version is “I hate you! You cheated! I’m going to make sure to shut you out of everything, from cereal to propane.

5. The obsession with bodies.  Little kids love to strip their clothes off, play doctor, and otherwise run around naked, fascinated with the wonders of their bodies. It’s adorable when they’re two, but we train them out of it because our mature culture believes that the more sexualized parts of our bodies should be saved for intimate relationships with people we love and trust.

When it comes to Progressives, though, theirs is a full reversion to the two-year-old self, with nothing more exciting than showing off their bodies — hence, the “free the nipple” movement. Every two-year-old agrees.

6. Not taking responsibility for their own acts.  Back in the 1990s, The Simpsons did a great episode about Bart, the perpetual 10-year-old, having destroyed a studio, defending himself with one simple phrase: “I didn’t do it.”

Adult Springfieldians are enchanted by this simple — and undeniably childish — way to avoid responsibility and embrace it wholeheartedly. The town swiftly falls apart. Kid tactics don’t work in the real world, even in the fake real world of The Simpson’s Springfield. That hasn’t stopped the Progressives, though, from pulling a perpetual Bart.

Those few on the Left who have a remnant of adult intelligence have figured out that there’s a problem with that attitude. If you don’t take responsibility for stupid decisions, you can never correct your mistakes.

The same failure to take responsibility shows up in the Progressives’ dependence on government. They graduate from a home in which Mom and Dad fulfill all their needs — and rescue them from all their mistakes — and immediately demand that the government take on the parental role. No wonder Michelle Obama wasn’t embarrassed to call Barack the nation’s daddy figure; after all, that’s what Obama’s constituents want to hear.

7. Cross-dressing and confused sexuality. A friend of mine discovered that the man with whom she was involved was a cross-dresser. Mentioning that to a therapist, she learned that traditional therapy associated cross-dressing with young men who had mental and emotional problems with adolescence. An important thing that today’s transgender warriors routinely ignore is that it’s very typical for young children and young adolescents to have gender confusion (that’s why there used to be a whole category of girls called “tomboys”). Most of them settle comfortably into the biologic gender when they pass through adolescence. A few don’t — hence the immature cross-dressers.

Nowadays, the Left aggressively pushes cross-dressing and gender confusion. That is, the Left is actively working to keep people in locked in the sexual identity confusion that is, for many, a normal part of growing up.

8. Pettiness. Kids are petty. A main manifestation of this is the way invitations to birthday parties get used as swords to strike against those kids who are a little too different or who are on the outs with the birthday kid. Mature adults don’t need to be petty because they’re not constantly feeling imagined (or real) slights nor are they always trying to prove their place in the pecking order. Immature adults, of course, are as petty as the kids they once were.

The perfect example is the way the Obama White House, back in 2009, after first trying to exclude Fox News entirely from White House events, decided to make its own petty little point when it couldn’t get its way:

After the lunch, Fox News anchor Shepard Smith reported for duty on his 3:00 p.m. show. He wasn’t able to talk about what was said at the lunch since it was off-the-record. But he was able to talk about something he noticed when it came to the name cards placed around the table. Something extremely petty and passive-aggressive done by White House staff.

That story reminds me of the way in which departing Clinton White House staffers committed all sorts of petty (but very expensive) sabotage in the West Wing to harass incoming Bush staffers:

”The Clinton administration treated the White House worse than college freshmen checking out of their dorm rooms,” Barr said Tuesday. ”They disgraced not just themselves but the institution and the office of the presidency as well.”

The GAO concluded that ”damage, theft, vandalism, and pranks did occur in the White House during the 2001 presidential transition.” The report stated that some incidents, such as removing keyboard keys, placing glue on desk drawers and leaving obscene voicemail messages ”clearly were intentional,” and intentional damage would constitute a criminal act under federal law. No prosecutions are planned, though.

The total cost to taxpayers for this adolescent pettiness: $15,000.

9. Sticks and stones may break my bones, but words will never hurt me.  If you grew up in America in the 1960s and 1970s, that chant was something you voiced often as you were leaving childhood behind and heading towards adolescence. It was an important phrase because it reminded us to be above the insults that are part of each child’s repertoire. Children, after all, are cruel. If children spend all their time falling into an emotional heap every time a peer calls them a name, they will become incapable of functioning. The healthy ones learn that the best way to deal with insults is to ignore them. It destroys the power of the person slinging that insult.

Progressives, however, have invested words with inordinate power. When you say something to them that they don’t like, you must be silenced. They, of course, have carte blanche to say whatever they want to you. Not only is this stance stupid and hypocritical, it’s incredibly childish.

I have paying work to do now, so I’ll wrap this up. I just hope I’ve made my point, which is that immaturity is woven into the warp and woof of Leftist DNA. Campuses have distilled it to its quintessence with all the stupidity about safe spaces, microaggressions, speech policing, etc., but it’s actually part of the Leftist DNA. They’re all like that: petty little people who can’t lose, throw temper tantrums when they can’t get their way, are confused about their sexuality, won’t take responsibility for their actions, and don’t believe anything exists that they haven’t seen or caused.