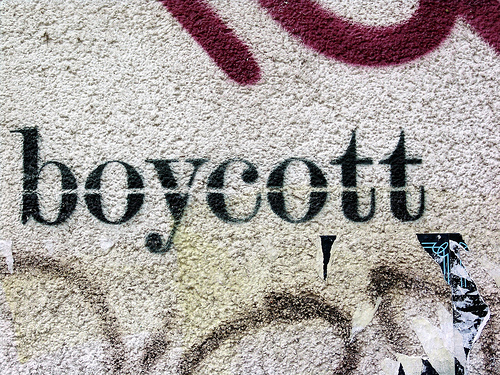 I have to admit to being baffled that more people are not angry and joining with me in #BoycottingTheBoycotters. Instead, they seem disturbingly comfortable with the fact that a growing list of businesses at home and abroad have determined that 62,000,000 Americans have placed themselves so far beyond the pale that these businesses will no longer accept their custom and their money. To that end, they’ve promised, not only to pull ads from Breitbart, but to pull ads from any other site the mentally decompensating Progressives deem “racist” or “bigoted.”

As far as I’m concerned, we’re looking at the new Jim Crow. In this 21st century variation on a Democrat theme, Trump supporters, based upon the vile libel that Donald Trump is a racist, are cast in the role of American blacks. The boycotting businesses, meanwhile, are precisely replicating those Democrat-run businesses in the Jim Crow South who would not serve blacks.

To get a sense of the speed with which this Jim Crow initiative is growing, check out the latest chart I made which highlights in red the businesses that have gone Jim Crow in just three days (click on the chart to enlarge). I’m willing to bet that you’ve done business with several of these companies in the last few years. (I mean, Elsevier, for goodness sakes, which is one of the largest information sites in the world, and Kaplan Test Prep, which all of us, or are children, have used.)

The ferociously smart Rob Miller, who blogs at JoshuaPundit and is a contributor to WOW! Magazine, shared a few thoughts on the subject with me:

The boycotters seem to fall into the following categories:

2) A few cities and Universities.

3) Furriners in Yoorup and Japan.

I have some experience with how boycotts work. Here’s my two agorat:

What we’re obviously facing is a highly organized effort. But it also appears to be a ‘shotgun’ approach. I’d be curious to know how many of these entities actually were Breitbart advertisers. I doubt the city of Costa Mesa, California was!

But a lot of companies are huge cowards. Hit them with an organized twitter bomb, mention re-aa-acism and they cave. Some simply have no idea and go along to get along. Others are run by lefties and delighted to gain rad brownie points.

There’s zero talking to them. In the case of my Scottish friends, the distiller sent me a polite e-mail telling me that in their opinion, the city council was loony tunes and their business was already suffering, but it was $##$# government and there was nothing they could do.

First of all, to make a boycott effective and make a difference, you have to do some sorting and some research. The civic and consumer orgs are pretty much imperious and so are the companies run by useful idiots. Ditto the colleges. Oh, but I repeat myself.

The categories where a difference could be made are companies who really aren’t aware of what they signed on to or companies who are open to persuasion. You can find examples of each situation here, regarding Trader Joe’s and Whole Foods.

Once that gets sorted out, the trick is organization.

I think we can destroy this.

I think Rob’s correct. My handful of posts are not the organization we need. I hoped that my #BoycottTheBoycotters hashtag would gain some traction, but it hasn’t. Moreover, for the next six weeks or so, I’m not in a position to spearhead a letter writing campaign.  Any suggestions for taking this to the next level? Any useful contacts who, if educated about this initiative, have the heft to take it beyond a Kellogg’s boycott and start singeing the short hairs of all the businesses that are piling on?

It seems to me that a good approach, which requires some technological savvy, would be a website from which concerned conservatives can easily send appropriate letters to the offending companies. Since Rob is correct, that a lot of these companies are go-along-to-get-along types, the letters have to be polite, but strong on information. Enough of those letters, and they will back down.

Meanwhile, I’m not buying that new Swiss Gear back pack I wanted and I’m stocking my cabinets with Post and General Mills cereals. That new computer I’m craving? It’s not coming from NewEgg or B&H. I do business only with companies that don’t treat me as someone who is subhuman.

My previous posts calling on conservatives to #BoycottTheBoycotters are:

#BoycottTheBoycotters — Kellogg isn’t the only one to call you “fascist”

#BoycottTheBoycotters: Conservatives are the new blacks in Jim Crow America