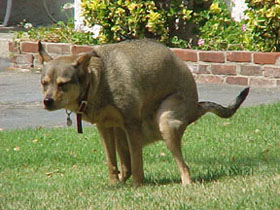 Almost since the day I started blogging, I have commented on the Leftist obsession with excrement.  My first post on the subject was in 2004 or 2005, when I was still a blogging neophyte:

Is it just me, or are people who come down on the liberal side of things much more inclined to rely on obscenities and scatalogical references? Whenever I read the comments liberals post at conservative websites, or even when I read the material liberals post on their own websites, I’m just inundated by wave after wave of swear words and potty references. I’m not going to sully my own posting with this kind of language, but you might want tovisit the comments gracing Diplomad’s latest, most-excellent screed about the UN. (I will admit, Diplomad’s title and article use the word “turd,” but it’s carefully introduced as a child’s peculiarly apt slip of the tongue.) Or go to the Daily Kos (which I find difficult to read, since it’s written along the lines of a high schooler’s “U R 2 kool” posting). You might check out this urinary description of Tom DeLay. I’ve always thought dirty language is the last refuge of the those who have little education, poor analytical abilities and, generally, little interesting to say. Any of you have any take on this?

I had cause to revisit that observation in 2006:

I was reminded of my impression when I read that a vice chair in Colorado Senate District 13 Democratic Central Committee was caught after she deposited her dog’s feces into the mail slot at U.S. Rep. Marilyn Musgrave’s campaign headquarters.  Did I mention that Rep. Musgrave is a Republican?  We’ve gone from the symbolic obsession with poop to the practical display of that obsession.

When it comes to the Left and poop, the topic’s never really dead.  In 2008, I again had reason to note the tight connection between Leftist culture and poop, this time in connection with a San Francisco ballot initiative to name a sewage treatment plan after George Bush:

I’m pretty certain the measure will pass.  The die-hards will vote for it out of political conviction, a small group of San Franciscans will treat it with the contempt it deserves by voting against it, and the vast middle will either ignore it or vote for it as a great joke.

At the end of the day, the party of poop will be ascendant.  They’ll have made their little scatological political statement and our entire democracy will be the poorer for this expression of crass immaturity at the ballot box.

I managed to ignore the whole “Leftists and poop” issue for a couple of years, until a scientific study published in 2014 indicated that there may be something more than pathological immaturity to explain the Leftist poop obsession:

It cannot have escaped your notice over the years that the Left is obsessed with poop. In both the spoken and the written word, Leftists are more likely than conservatives to rely on obscenities, especially scatalogical references.  It’s for this reason that practically every fifth word Jon Stewart utters is bleeped out. Heck, they even like their entertainment to revolve around the more disgusting moments in life.

Some surprising research has come out of Virginia Tech. A group of international scientists has discovered that your brain’s response to disgusting images might be able to predict whether you are a liberal or conservative. The findings will be published in an upcoming issue of Current Biology. Participants in the study were hooked up to a brain scanner then shown images of disgusting scenes such as, rotting carcasses, dirty toilets, and kitchen sink gunk. Participants were also shown neutral images, as well as pleasant images like babies and landscapes.

The study established that political conservatives react more strongly to revolting images. Because this study comes out of American academia, the study’s authors naturally conclude that this finding means that conservatives are more stupid and fearful, while liberals have big brains that override such primitive emotions:

Meanwhile, liberals have much more primitive lizard brains and stalled emotional development, two factors that result in their comfort with feces, vomit, rot, and all the other detritus that people in a healthy, advanced civilization seek to dispose of and avoid.  Being more primitive, Leftists’, like dogs or pigs, are comfortable sniffing at and rolling around in the muck.

There’s more at that post, including a series of images both showing and generated by the Left, all of which focus on . . . yes . . . poop!

Even movies have become poop paradises.  Just as I finally started inuring myself to the inevitability of a vomit scene in just about every movie ever made lately, poop has become the new frontier, one gladly taken up by the newspaper industry.

You’d think I would have had more than enough of the whole Leftist poop phenomenon.  Why, then am I once again directing you to the Leftist sewer?  Simple:  I couldn’t help myself.  Over at American Thinker, Pamela Geller has something of a eulogy for a debased American culture that has abandoned its former wholesomeness and today can best be summed up by an increasingly common emoticon — the smiling poop:

Post-9/11 America, and especially America in the Obama presidency, is a different world from America as she was before Obama, and before the left started its long march to destroy this nation. America today is increasingly anti-freedom, anti-truth, anti-ideas, anti-capitalsim – anti-reason. A nation built on a morality of reason has all but abandoned its foundational principles. Public schools and academia produce zombies – goose-steppers like the Hitler Youth – who are militant and violent in their imposition of the leftist/Islamic agenda. And when they do it, they congratulate themselves about how they have stood up against “fascism” and “intolerance,” when the intolerant fascists are they themselves. Intellectually, young Americans are the most docile conformists, no matter how vocally and self-righteously they declare themselves free. They have accepted as dogma all the philosophical beliefs of their elders of the hard left without question or exploration. A continuing negation of life and self.

The culture is ugly. The music is ugly, violent, and misogynistic. Every crime drama and suspense series is rife with the most unimaginable gore. Game of Thrones, Law and Order (Sex Crimes), American Horror Story – they’re all devoid of humanity and morality. Devoid of goodness. It’s a cultural rout. It’s not that the line between good and evil has been blurred – it’s nonexistent. We are living in a cultural free-for-all, or more accurately, a free fall.

Pain, blame, victimhood are the ideals. When Pharrell performed his confection of a tune “Happy” at the Grammys, he was compelled to turn it into a dirge. A bright, happy, sparkling little jewel of a tune was accompanied by ugly political rhetoric and costume, #handsup, hoodies, and a porter/bellman costume for Pharrell.

Please be sure to read the whole thing. I couldn’t agree more with Geller’s analysis about modern American culture. It’s not just the loss of innocence. It’s the headlong dive into cultural debasement. We are currently experiencing, in many ways, something similar to the degraded culture that emerged in Germany between World War I and Hitler’s takeover. In both cases — Germany then and America now — a culture that has abandoned morals, liberty, decency, and innocence really has nowhere to go but down.

Having said that, I do think there is hope.  This hope comes, not from looking at England today (as debased a country as there ever was) but at England yesterday — specifically in the period between about 1740 and 1840.  Jane Austen’s wholesome charm notwithstanding, Georgian England was exceptionally debauched.  In the mid-18th century right through the death of William IV and ascension of Victoria, London was a Hogarthian nightmare of drunkenness, alcoholism, sexual license, abject poverty, and prostitution. Even as the countryside was still somewhat sweet, London set a dreadful tone.

Instead of becoming a Hellhole, however, England had a mid-19th century Renaissance. Evangelical Christianity, which set its sights on slavery, prostitution, and child labor, when combined with overall repugnance at London’s excesses, led to the enshrinement of the class virtues we associate with the Victorian era. The vices didn’t vanish, but they ceased to be part of popular culture. They were looked down upon, rather than celebrated.

That can happen in America too. Yes, our popular culture is disgusting. But as the 2010, 2012, and 2014 elections have shown, Americans still lean conservative. Voters may have reelected Obama (something that probably could not have happened without IRS and media illegality and fraud), but in all other regards, Americans made a sharp U-turn towards candidates who promised a retreat from the Left’s Brave, and Ugly, New World.

Perhaps, given enough time, America will once and for all flush this poop culture down the drain.