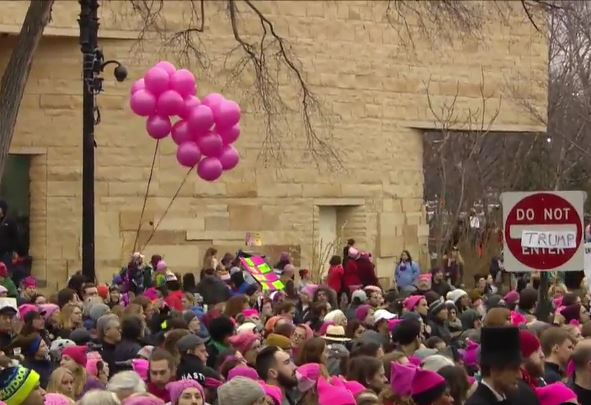 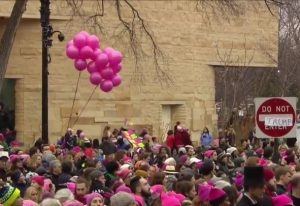 Hillary’s pink-hatted “nasty women” have had their moment. My leftist friends on Facebook are ecstatic.

Many said of their participation in local marches that they’re “with Hillary.” One used the march to shill for her obsessive claim that Big Oil and Big Tobacco own the federal government. It was they, not Putin, who elected Trump. Another, looking at the undoubted crowds that showed up, opined that this was proof that the vote was hacked. When it comes to basic logic, she doesn’t seem to understand that the same people who show up at these marches are also the same people who actually voted. Yet another spoke approvingly of a march in Oakland. To her, the size of the march and the nature of the signs (see below) meant that Trump will be unable to govern.

All, of course, as their pink-hatted heads attested, were offended that Trump is an old-fashioned guy who is open (and, indeed, vulgar) about his sexual passion for women. I mean, it’s bad enough that he’s unapologetically cis-gendered. It’s worse that he actually talks about sex in a “guy” way.

I should note here that I am in complete accord with the Canadian vlogger who, having watched the entire Billy Bush videotape, concluded that Trump did not boast about mauling women but, instead, made an admittedly vulgar, but otherwise non-specific, and probably completely accurate, wisecrack about what rich men can theoretically can away with. Aside from getting baited into somewhat vulgar badinage in a guys’ locker room kind of way, his behavior was impeccable.

As much as anything, the marchers seemed bound together by cognitive dissonance. For example, everyone on my Facebook feed was proud of the marchers’ slogan: “Love, not hate, makes America great.” Indeed, one friend heartily approved of marcher Wanda Brown’s comment about “all the love I saw out there.”

That happy rhyme, however, was belied by the loudest rhetoric and the hate-filled signs. Madonna drew cheers when she said loving things as “F**k you” and “I have thought an awful lot about blowing up the White House” (Hey, Secret Service! Did you hear that? Sounds like a threat to me.)

Ashley Judd also wowed the crowd when she read a poem that called Trump Hitler, claimed he had wet dreams about Ivanka, accused him of supporting the KKK, and sang a paean to women’s “pussies.” I don’t know about you, but when I hear that, I’m not feeling the love.

Many of the signs too were a whole lot closer to Judd’s and Madonna’s neurotic, hate-filled rhetoric as opposed to that that chipper, friendly slogan: 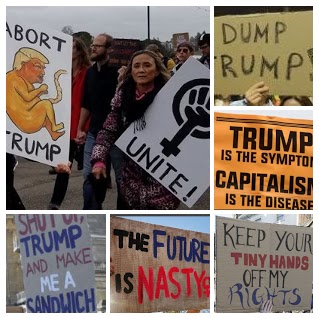 Typically for the Left, the real common denominator was abortion. As I figured out years ago, abortion is the Holy Grail for the Left. It is the one thing that ties white middle-class women to disparate groups such as Muslims (who hate those same women), black supremacists (who hate those same women), homosexuals (who hate breeders), and so on. Nancy Pelosi, the alleged Catholic, said it best when she insisted that abortion, especially late-term abortion (i.e., aborting a viable baby) is “sacred ground.”

At the end of it all, I’m actually at a loss to understand why those women are marching. It’s one thing if a movement arises, as the Tea Party did, in direct response to post-election legislation and executive action. In that case, the ballot box is unavailable in the immediate and relevant time frame, making street protests the only option. However, this march struck me as massive temper tantrum from the side that lost the election. Col. Kemp nailed it:

If America gave women the vote they could have elected who they wanted in November & not have to do all this marching now. pic.twitter.com/c3HiFMUgN1

Color me . . . not pink, but unimpressed. Of course, I don’t matter. What matters is whether Trump and the Republicans in Congress care about these marchers and their tantrum. My guess is that Trump won’t care in the least. Moreover, I suspect that the Republicans in Congress, who finally have fearless leadership, might be able to close shut out the protesters and do the right thing. After all, that’s what Obama and his Congress did in 2009 when the Tea Party presented them with a legitimate grievance for which there was no ballot. 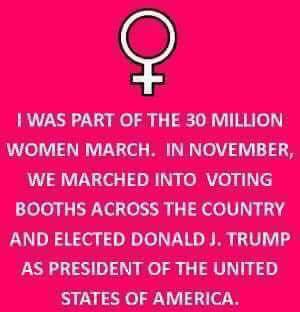