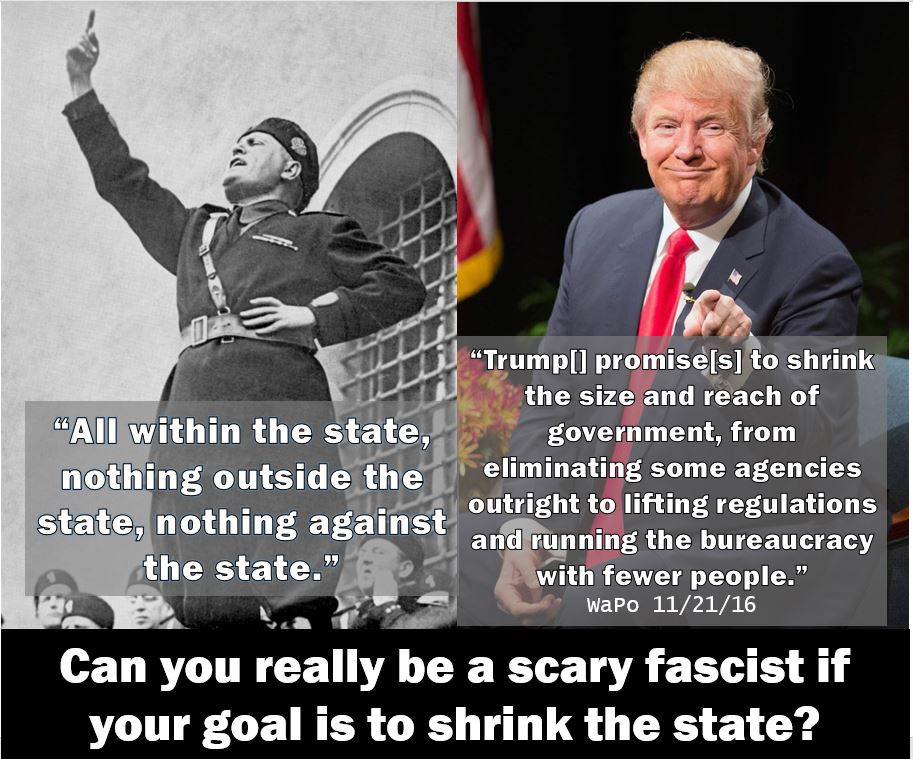 It’s serious business when Google — with its unimaginable reach and control over people’s understanding of their world — does what every single Leftie since WWII has done: conflate “fascism” with “right-wing.” I’ve been banging this gong for years. Rather than do yet another lengthy post, I’ll confine myself to a few brief remarks and then provide links to just a few in the laundry-list of posts I have on the subject.

The keystone of the Fascist doctrine is its conception of the State, of its essence, its functions, and its aims. For Fascism the State is absolute, individuals and groups relative.

Fascism is a religion. The twentieth century will be known in history as the century of Fascism.

Both fascism and communism are subsets of socialism. Fascism allows ostensibly private ownership, provided that this ownership, like everything else within the fascist state, is subject to state control. Communism simply does away entirely with the illusion of private ownership.

The fascist fight against communism in the 1930s (which led many British and American people who were scared of communism to embrace fascism) was not, as people then thought, a fight between communism and its opposite. It was an internecine battle between two closely related authoritarian ideologies.

There is no Hitler in America, because Hitler was a deranged psychopath and our politicians, no matter how awful they are, are not deranged psychopaths.  However, it is noteworthy that one American political party desperately desires to bring everything within the ambit of the state, while the other is committed to shrinking the state’s reach as much as possible. I leave you to decide which party advocates which policy, and which policy is likely to secure true individual liberty.

Lastly, if you’re more interested in just how badly Google behaved, here are just a few of my past posts on the subject:

Trump’s promise to shrink government is antithetical to fascism

Trump is not a fascist

Dear Elites — no, Trump is not a fascist, but Hillary probably is

Trump is not a fascist — but Hillary is

Five reasons that the benefits that flow from guns far outweigh the risks inherent in guns (because guns and freedom — i.e., anti-fascism — are inextricably intertwined)

Neither Trump nor Hillary is Hitler — but Hillary has potential

Will American capitalism be a victim of the rise of fascism-lite and the devaluation of language?

For more on the Orwellian nature of Google’s act, check out American Thinker.