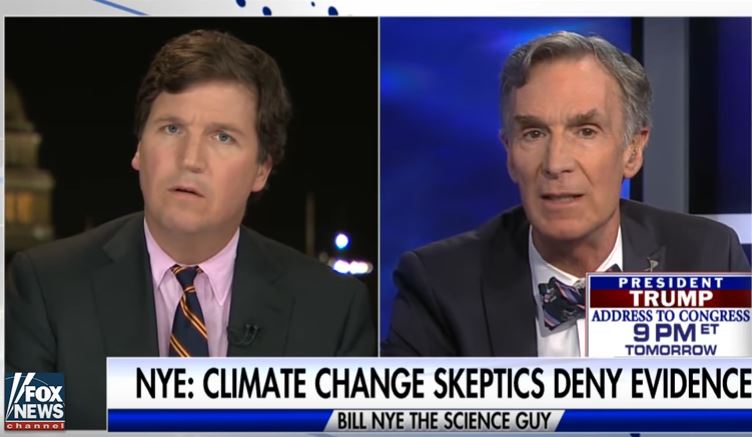 Watch and enjoy as the smug Bill Nye has a cognitive dissonance moment when he is incapable of answering Tucker Carlson’s simple science question. 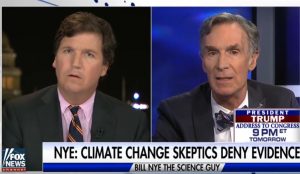 Have you ever heard the word “tergiversate”? It’s a great word meaning to make conflicting or evasive statements or to equivocate. That word perfectly describes what Bill Nye, the so-called “science guy,” starts doing when Tucker Carlson asked him to produce data to support his catastrophic climate change assertions. In a millisecond, he goes from making smug, unsubstantiated assertions about the fact that climate change is undeniable, to a dodging and weaving rat, incapable of answering an actual science question:

To really understand what you just saw, let me hand the mic to Scott Adams:

Here is the best (and weirdest) example of cognitive dissonance you will ever see. The set-up is that Bill Nye, an engineer by training, and a proponent of science, is defending climate science on Tucker’s show.

The set-up for the trigger is that Nye’s self-image is that of a rational supporter of science with a command of the facts about climate science. He has made a career recently of defending science, and climate science in particular. Nye’s ego depends on being consistent with his pro-science, rational stance. That’s who he is.

Tucker then asked Nye a simple question about climate science. He asked how much of the warming is caused by human activity.

Look for Nye to go totally mental in the last minute of the clip, changing the topic to political leaks for no apparent reason. That’s your tell. His brain just sort of broke right in front of you.