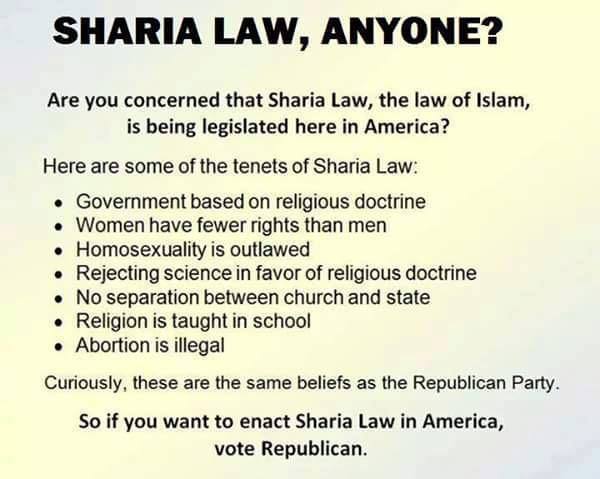 The Left cuddles up to antisemitic Muslims like Linda Sarsour, but absolves itself of sin by accusing Republicans of practicing sharia law. 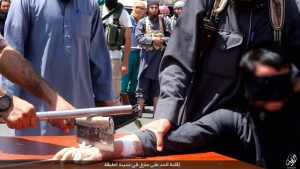 When you and I think of sharia law, we probably think of women lacking any legal rights, including the right to leave their homes without a male escort or the right to wear clothes that reveal more than their eyes. We might think of the fact that, if a woman is accused of adultery, she’ll be executed. Or perhaps we think of blood-thirsty, sharia-advocating Linda Sarsour, the new darling of the feminist anti-Trump movement, threatening women with whom she disagrees, with “a$$” whippings and having their vaginas removed.

Our thoughts might wander to men and boys being hanged from cranes or thrown off of buildings, only to be finished off with rocks thrown by a watching crowd, for the crime of being gay. Or we might think about people getting lashed and imprisoned for speaking freely. Perhaps we remember that the complete prohibition upon lending money for a reasonable profit means that Muslim economies, unless they’re powered by oil, cannot grow.

Some of us might have unpleasant mental images of thieves having their right hands cut off. This last is an even more heinous punishment than first appears because it means that these thieves must eat and wipe their butts with the same hand, making them social outcasts. In that regard, do keep in mind that, for the devout, sharia law mandates that the butt wiper use a hand unmediated by leaves, paper, or — Heaven forfend! — toilet paper.

We might also think of the mandates to kill Jews and enslave all non-Muslims — or, if they cannot be enslaved, to make them second class citizens subject to a high tax for the privilege of living amongst Muslims. We might think of genocidal attacks against Christians taking place all over the Muslim world today.

Regarding slaves, those same sharia mandates make it clear that female slaves are to be used for sex. Heck, any female who is not a devout Muslim (which, in the modern era, means one completely covered), can be used for sex against her will.

Other things we might think of are the mandate to expand Islam throughout the world, not through example and peaceful proselytizing, but through fire and sword. We’d certainly remember that forcibly converted people can’t back out. After all, sharia law mandates that anyone who leaves Islam has automatically subjected himself (or herself) to the death penalty. And of course, there’s the fact the government dictates every aspect of people’s lives and faith.

Well, those are some of the things I think of when I think of sharia law. This is what Progressives think of:

That poster is so erroneous that it’s a bit difficult to figure out where to begin. The best advice, I guess, is to “Begin at the beginning, and go on till you come to the end: then stop.”

1. Government based on religious doctrine. The Constitution very explicitly says that Congress may not pass “any law respecting an establishment of religion, [or] impeding the free exercise of religion.” The 14th Amendment means that these prohibitions apply equally to state governments.

Put another way, the government cannot establish a religion or dictate its terms. Sharia, of course, is the legal establishment of an all-controlling religious and one that, through government power, prohibits freely exercising any other religion.

What the First Amendment does not say is that that those people who freely exercise their religions (1) may not serve in the government and (2) may not use their beliefs to shape their political choices. Frankly, I’m glad that the Judeo-Christian prohibition against murder has been enshrined in American law.

There is a huge difference between a government that is inextricably intertwined with a religion and a republican democracy in which religious people are allowed to serve and to which they can bring their values. Yes, it’s a huge difference, but apparently it’s also one too subtle to sift through the Progressive mind.

As far as I can tell, and I do pay attention to these things, no Republicans are demanding that the American government create an official state religion. In this, they are separate from both sharia advocates who desperately want the US government to become a branch of an Islamic caliphate and the Leftist faith which desperately wants to impose an economic, social, and political belief system that, when tested in the real world, invariably fail to deliver.

What Republicans want is to practice their religion in peace. The want the government out of their faith, instead of having it force their churches to conduct marriage ceremonies, telling the faithful that they must participate in offensive ceremonies, or taking their money to fund abortions that they perceive as outright murder.

2. Women have fewer rights than men. As best as I can tell, America and each of its states, unlike sharia-controlled lands, have absolutely no laws on the books that explicitly (or implicitly, for that matter) discriminate against women. First wave feminism gave women the vote; second wave feminism gave them equality under the law. The only thing that I can think the poster writer means is the alleged wage gap.

I say “alleged” because there is no wage gap. Men and women make different choices, primarily because biological realities see women opting for lower paid jobs or long work hiatuses so as to care for children. It’s true that these different choices bump women into different wage categories, but there is most certainly no corporate/government conspiracy against women. If corporations could pay women less, maximizing corporate profits, men would be permanently unemployed.

Sharia law, however, is explicit and unchangeable when it comes to women’s limited rights. I recommend this article about women’s basic rights under sharia law and urge you to compare it to women’s rights under American law. If you’re not a Progressive, you’ll probably see that the two systems are quite different. You can decide too which you think is a better system for women. I prefer the American system.

And what about Republicans? Can you think of a single instance in modern America in which a serious Republican (as opposed to the rare fringe maniacs whom the Left finds wandering around open fields talking to Martians) . . . a single serious Republicans has demanded fewer rights for women?

3. Homosexuality is outlawed. It is true that, all the way through 2003, fourteen American states had anti-sodomy laws on the books. It’s also true that, after the 1970s, they were relics that prosecutors might drag out to tack onto a laundry list of other criminal indictments in order to force a plea bargain. In 2003, in Lawrence v. Texas, the Supreme Court struck these laws down.  Twelve years later, in Obergefell v. Hodges, the Supreme Court legalized gay marriage.

The vast majority of Republicans have made their peace with these laws. Even those Christians who believe homosexuality is a religious crime do not demand that the law act against homosexual conduct. The line they draw is that they do not want the government to interfere in their faith by telling them that they must use their churches for gay marriage ceremonies or use their skills to serve at gay weddings.

4. Rejecting science in favor of religious doctrine. Apparently rejecting climate change means you’re a religious nut. Funnily, I think the opposite way: I think those who are invested in climate change, despite it’s being based upon inherently flawed computer simulations, and despite the fact that actual data proves it wrong, are locked in a non-falsifiable theory — aka, a faith-based religion. Also, it’s hard not to laugh when you get “science” lectures from an ideological cohort that believes you are whatever gender you wish yourself to be. As this article explains, while race may be a continuum, gender is binary — that’s biology, not religion.

Saying “the scientific method,” as Chelsea Clinton did, does not prove that something has a scientific basis. There actually has to be a method — develop a theory/hypothesis, construct a system for putting the theory to the test, analyze the resulting data, reproduce the test, etc. That kind of stuff. It’s most certainly not enough to run partial and theoretical data through a computer program in advance of an event and then present whatever the computer spits out as “fact.” It’s even worse to stick to that so-called fact when actual events prove it wrong.

Thinking about it, the eternally vapid, aimless, arrogant Chelsea is the perfect Progressive avatar, especially about science.

5. No separation between church and state. See my discussion of the first issue, above. I will add that, to the extent the Left denies that its beliefs are, in fact, a matter of faith, not science, and to the extent that Leftists are trying to impose these faith-based beliefs on America, I think the Left could do with a bit more self-awareness.

6. Religion is taught in school. Same discussions as 1 and 5, above.

7. Abortion is illegal. I can’t argue too much with this one. The Left has become a death cult, something I find so off-putting, I’d rather have abortion illegal than the situation under which we currently live.

I’m not alone. The reality is that the bell curve of Americans are squishily pro-Life. They recognize that life begins at conception, but they have this vague feeling that, before the fetus has a heart and a brain and a nervous system, the mother’s needs should predominate. They’re also uncomfortable making a woman carry to term a baby that is the product of rape or incest, even though they know that the unfortunate circumstances of the baby’s conception are not its fault. What most Americans understand is that, once a baby can survive outside the womb, which happens at earlier and earlier points in development, abortion starts to develop an uncomfortable similarity to infanticide.