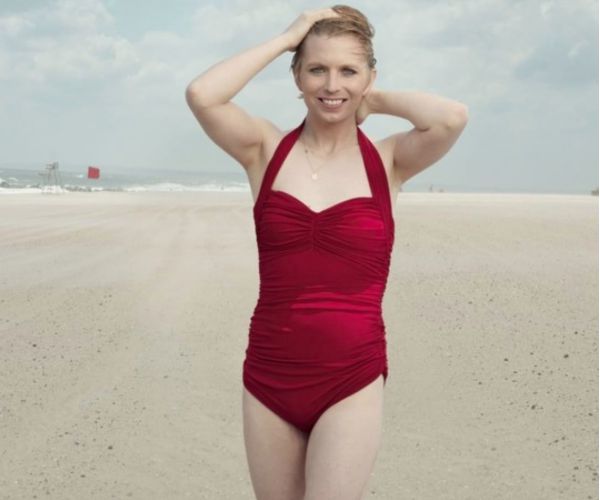 Showing its anti-Americanism, The New Yorker celebrates the treasonous Bradley Manning as a mover and shaker who was more sinned against than sinning.

Mr. Bookworm has a subscription to print version of The New Yorker. Most of the time I ignore this weekly magazine, finding it alternately banal, pompous, and boring. My time on this earth is finite and I have better things to do with that time than struggle through The New Yorker’s smug self-righteousness.

Occasionally, though, when I can’t get my hands on anything else to read, I’ll glance through its pages. That’s how I found myself yesterday riffling through the most recent edition, where I learned about the upcoming “New Yorker Festival.” Here are the pages boasting about this apparently epic event:

For one weekend only [October 6-8], in New York City, the artists, authors, thinkers, and personalities shaping the world today will take the stage with The New Yorker’s celebrated writers and editors, in an open exchange of ideas and insights bound to make news.

With a come-on like that, I simply had to turn the page and learn about these “artists, authors, thinkers, and personalities shaping the world today.” I mean, my God. The future is here! The future is now! The future is at The New Yorker.

For the most part, the list of people “shaping the world today” is a line-up of the usual Progressive suspects. Here are some of the names The New Yorker feels are important enough to put on the home page within the magazine promoting its upcoming festival (with all of the people attending to be found here):

What? The New Yorker believes Bradley Manning is an “artist, author, thinker, or personality shaping the world today”?!

Are we talking about the Bradley Manning who used his position in the military to steal massive amounts of classified information and hand it over to WikiLeaks, which published it, exposing state secrets and American allies working in some of the world’s most dangerous places? That Bradley Manning? The one who suffers from a mental illness that sees him believing that he’s a woman? That Bradley Manning? Why, yes, we are.

Here’s how The New Yorker describes little Bradley (whom they call “Chelsea”) to justify his inclusion in their line-up:

Chelsea Manning is an activist and former U.S. Department of Defense analyst. She is an advocate for L.G.B.T. rights, civil liberties, and transparency, and has written for the Guardian and the Times. Manning, who served seven years in military prison, now speaks about collective survival and resistance under oppressive conditions. Earlier this year, President Barack Obama commuted her thirty-five-year sentence.

See? He’s just a freedom fighter and collectivist, not to mention an LGBTQRSTUV etc. activist, which totally wipes out his treasonous criminal activity.

With Bradley now on my radar, I did a little research to remind myself what possible reason Obama could have advanced to justify cutting his sentence from 35 years to 7 years served. After all, my Lefties, all of whom think in lockstep with Obama, were totally good with that commutation. I mention this because these are the same Lefties who are coughing up blood at the horror of Joe Arpaio’s pardon. Joe Arpaio, as you recall, got sentenced for daring to try to comply with federal law, something a Clinton-appointed federal judge found so contemptuous it justified sending an old man to prison.

Here’s what Obama had to say. . . . Whoops. Sorry. Obama didn’t say anything. However, a week before, one of his minions laid the groundwork for the commutation:

White House press secretary Josh Earnest emphasized that Obama has not made a decision on granting clemency in either case. But he emphasized that there is a “pretty stark difference” between Manning, an Army private, and Snowden, a former National Security Agency contractor. Both have admitted to leaking national security secrets.

“Chelsea Manning is somebody who went through the military criminal justice process, was exposed to due process, was found guilty, was sentenced for her crimes, and she acknowledged wrongdoing,” Earnest said. “Mr. Snowden fled into the arms of an adversary and sought refuge in a country that most recently made a concerted effort to undermine confidence in our democracy.”

So Manning is a saintly criminal because he was caught before he could flee, after which he was properly tried and convicted, and he admits his crimes? This makes him innocent-ish?

Well, no. If you go back to The New Yorker, you discover that, to the Left, Bradley is really the victim here, not the criminal? If you’re saying “huh,” you fail to realize that the fault likes with the Army, which failed to treat his body dysmorphic mental illness with the correct respect. Manning’s only course of action was treason:

1. When she was a soldier in a war zone, the Army failed her terribly.

“Hey, what are we doing about this soldier?” a lieutenant in an intelligence unit in Iraq asked a colleague when Manning, who was then twenty-two years old and still identified as Bradley, showed every sign of going through an emotional breakdown. That day, Manning had flipped over a table; other times, people found Manning, who had joined the military seeking refuge from a childhood contorted by her parents’ alcoholism, on the floor, crying. The response at the undermanned outpost was to send Manning back to the computer—and to the task of processing classified battlefield intelligence, with its accounts of death and the relentless moral tragedies of war. Soon after, Manning downloaded hundreds of thousands of files and sent them to WikiLeaks—and it says a great deal about the absurdities of our classification system that this young soldier had access to so much material. A couple of months later, Manning, still an enlisted soldier, e-mailed a supervisor a photograph of herself wearing a wig, with the caption “My Problem,” and was nonetheless sent back to work. (The military’s Don’t Ask, Don’t Tell policy was still in effect, adding to the pressure.) Quite apart from whether the Army ought to have spotted a security risk, Manning deserved help, like any soldier, and didn’t get it.

Now, one can certainly blame the military for being stupid enough to put a mentally disturbed person in charge of secrets, instead of discharging said person immediately. However, that doesn’t exonerate said person from having committed a vile crime against American security, harming American allies, and putting lives at risk. After all, mentally ill or not, Manning knew what he was doing when he gathered and released that information. A stupid (and politically frightened) military does not vitiated a terrible crime.

As was the case with the Obama administration, The New Yorker also thinks Manning’s decision to confess to his vile crime entitled him to be released for having committed that same vile crime:

4. She has taken responsibility.

This one seems to have really mattered to Obama. Last week, Josh Earnest, the White House press secretary, went out of his way to make the point to reporters, while drawing a distinction between Manning and Edward Snowden. “Chelsea Manning is somebody who went through the military criminal-justice process, was exposed to due process, was found guilty, was sentenced for her crimes, and she acknowledged wrongdoing,” Earnest said. Indeed, Manning seems to have realized that, as much as she may have wanted Americans to understand the horrors of war—and as much as some of the files she leaked, particularly about civilian deaths in Iraq, helped them to do so—indiscriminately putting the bulk information she had access to in the hands of Julian Assange was not a well-thought-out move. (WikiLeaks had tweeted that Assange would agree to extradition to the United States if Manning was granted clemency; we’ll now see what that means.) Manning, before her trial, entered a guilty plea on ten charges, which would have been enough to send her to prison for twenty years. She did so not as part of a plea deal but as an act of unforced penance that the government, for whatever reason, was not ready to accept. It pursued more charges under the Espionage Act, and also adopted an ambitious (and, from a press-freedom perspective, alarming) legal theory to argue that Manning was guilty of “aiding the enemy.” She was acquitted on that last count, at least. In her application for a commutation, Manning said that she understood why a request she had made for a pardon soon after her sentencing had been turned down. “It was too soon, and the requested relief was too much. I should have waited. I needed time to absorb the conviction, and to reflect on my actions. I also needed time to grow and mature as a person.” The “sole relief” she was asking for was release after six years of confinement.

“Yes, your honor. I brutally murdered all those little boys to satisfy my sick sexual fetish. I feel really bad about that. Really bad. So are you going to release me from prison now?”

It’s true that our parole system allows committees to examine whether someone’s behavior in prison, combined with his or her confession of sin, justifies shortening a prison sentence. The principle behind those parole is tied to the old religious notion of confession, remorse, repentance, with the latter proven by serious efforts to make up for the wrong done.

Manning, however, skipped that whole remorse and repentance thing. Instead, he merely confessed his crime (which he could scarcely deny). Then, after six years passed, he said he thought six years was long enough for him to have served. Unlike my hypothetical serial killer, little Bradley’s clemency request does not contain a smidgen of remorse. Instead, he complains about the military prison treating him badly.

Rhett Butler, when he found a tearful Scarlett O’Hara drinking and crying after her rash behavior caused her husband’s death, said words that apply perfectly to Manning: “You’re like the thief who’s not the least bit sorry he stole, but he’s terribly sorry he got caught.” Exactly. There’s no remorse and repentance. There’s just a complaint that the prison is not a nice place.

If it is indeed true that Manning was mistreated in prison, that ought to be addressed. It reflects badly on the military to treat prisoners in an inhumane fashion. Setting Bradley free, however, is the equivalent of complaining that the Thanksgiving turkey is under-cooked and using that as a justification to throw the entire meal into the garbage. You should do what I did when an old oven resulted in a slightly raw turkey — I cooked it more.

You know, it’s very difficult to think less of the self-styled Leftist intelligentsia than I do, but The New Yorker’s willingness to elevate an out-and-out traitor to celebrity status has managed to lower that institution’s reputation even more as far as I’m concerned. It’s not even bird cage liner because, frankly, if I had birds I’d be worried about their proximity to this toxic mindset.

I’m genuinely sorry this publication sullies my house. The only good thing is that, thanks to Mr. Bookworm’s being frugal, he always threatens to cancel, which results in the magazine agreeing to send him 50 or so magazines a year for $19.99, which I think is a loss.