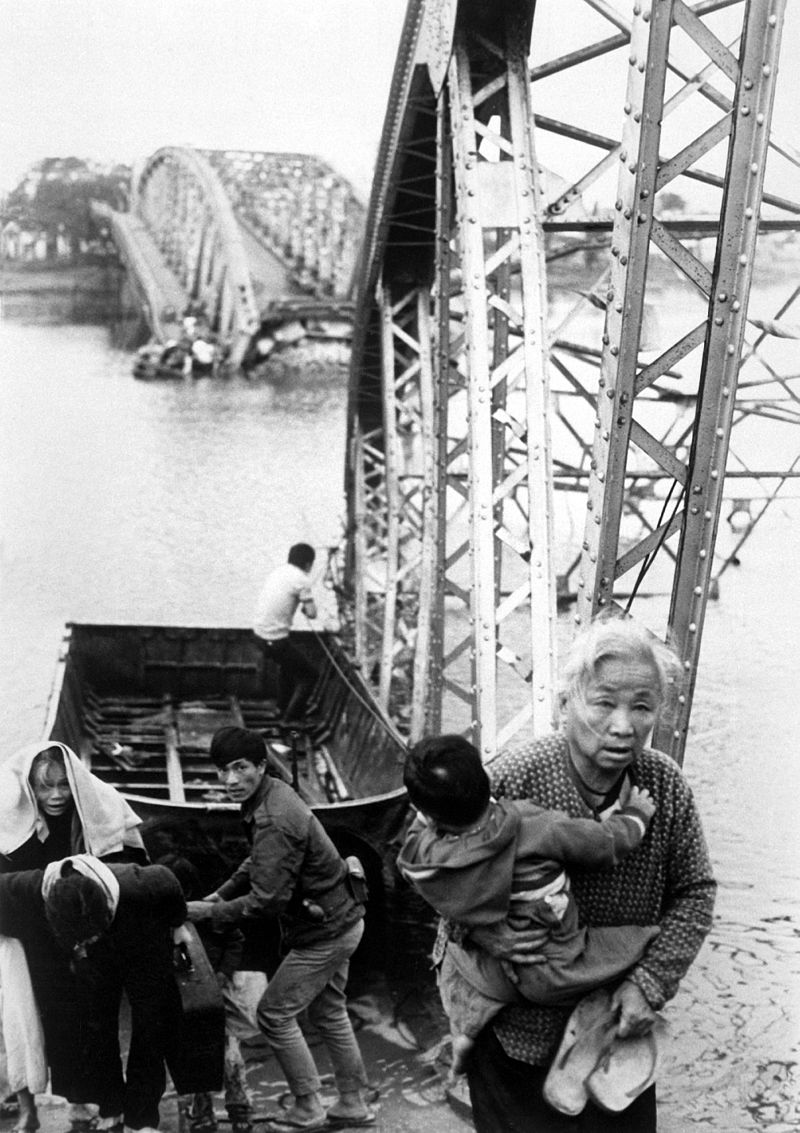 Ken Burns’ manages to be mostly honest in a stunning look at the Tet Offensive, but what he leaves out is as important as what he includes.

Here in the Bookworm home, we’re still working our way through Ken Burns’ Vietnam War documentary. Last night, we got to the part about the Tet Offensive. Having recently been in both Hue and Saigon, the footage of the running battles really resonated with me.

I don’t know why it is, but I find that wars are always more real to me when I see the actual ground on which they took place. When I travel, I visit battlefields, and that’s despite the fact that I’m stunningly unversed in battlefield tactics. Over the years, I’ve visited Carthage, Waterloo, Ypres, the Somme, the Ardennes, Fredericksburg, Gettysburg, Yorktown, and others I can’t remember now. After seeing the footage of the Tet Offensive, and combining it with my personal visual reference points, I have a better sense of the battle that raged then.

Overall, Burns did an extremely good job of explaining the larger outlines of the lead-up to the Tet Offensive and the offensive itself. He explained the North Vietnamese thinking about a major assault that would cause South Vietnamese troops to defect and the populace to side with the Viet Cong and North Vietnamese regulars.

Of the battles themselves, Burns uses footage that helps explain why almost 80 journalists lost their lives in Vietnam. These journalists were right there with the US troops filming away. I got breathless watching because the sense of immediacy was overwhelming. This was Call of Duty, except with real Americans shooting real guns at real enemies, with the enemies shooting back.

Burns makes it plain that the Tet Offensive was a disaster for the North Vietnamese. Not a single South Vietnamese soldier defected; civilians just hid from the fury, fearing the communists even more than their own government; the North Vietnamese lost almost as many fighters in the Tet Offensive as America did over the course of the entire Vietnam war; and the American military proved itself in battle to superb in terms of courage, strategy, and tactics.

Regarding those casualties, this data from the Wikipedia article on all three phases of the Tet Offensive tells you all you need to know about winners and losers:

Burns also covers the fact that, in Hue, the retreating Viet Cong fighters massacred some 2,500 civilians. It’s one of the few glimpses Burns allows into the murderous fury that lies behind all totalitarian movements — and communism is nothing if not totalitarian. When we were in Hue, our guide made an oblique reference to it, saying that the “killing was terrible, when they settled old scores.”

Burns also highlights LBJ’s waffling, which seems to have been driven by politics, rather than by any understanding of military necessity. His political needs even overrode his old-fashioned Democrat Party understanding that communism was a bad thing.

It became very apparent listening to LBJ’s taped conversations that he, rather like Barack Obama, was never a real “Commander-in-Chief.” He was always a “Party Politician in Chief” — and with much the same result for both those presidents, in that Americans died for no purpose and America abandoned her allies. It was this waffling that saw LBJ, in the wake of the significant American victory during the Tet Offensive, beat a retreat, rather than sound an attack. Had he chosen the opposite tack, the war might have ended with a definitive American victory in 1968.

Part of LBJ’s problem was a single photograph, that famous picture showing Nguyen Ngoc Loan, the Chief of Vietnam’s National Police, summarily executing a Viet Cong prisoner on the street: 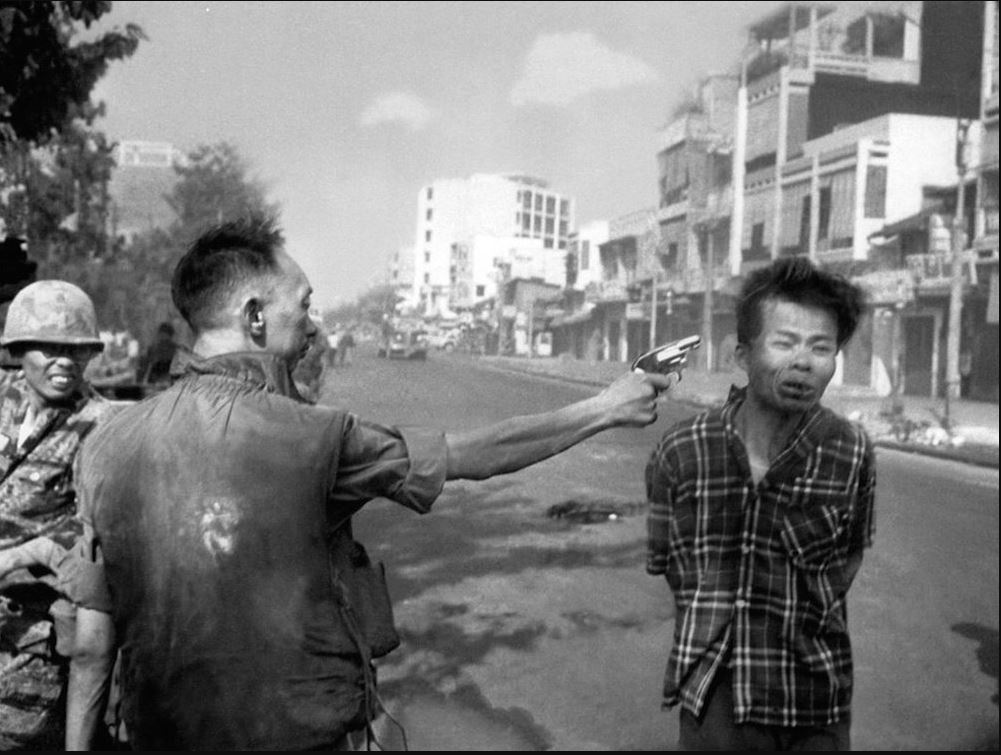 That photograph appeared on the front page of The New York Times, as well as myriad other American papers and magazines. The American people didn’t like what they saw. It told them that they were siding with the armed bully against the small, battered, unarmed civilian.

Echoing the increasingly Left-leaning 1960s media, Burns doesn’t bother to explain the back story behind that photograph. Terry Garlock, in an article warning viewers to be skeptical about Burns’ version of history, explains what really happened there. He describes a talk he gives about the way in which images got manipulated to benefit the antiwar movement:

One of those photos is the summary execution of a Viet Cong soldier in Saigon, capital city of South Vietnam, during the battles of the Tet Offensive in 1968. Our dishonorable enemy negotiated a cease-fire for that holiday, then on that holiday attacked in about 100 places all over the country. Here’s what I tell students about the execution in the photo.

“Before you decide what to think, here’s what the news media never told us. This enemy soldier had just been caught after he murdered a Saigon police officer, the officer’s wife, and the officer’s six children. The man pulling the trigger was Nguyen Ngoc Loan, South Vietnam’s Chief of National Police. His actions were supported by South Vietnamese law, and by the Geneva Convention since the captured killer was an un-uniformed illegal combatant. Now, you might still be disgusted by the summary execution, but wouldn’t you want all the facts before you decide what to think?”

I urge you to read Garlock’s article, as well as a follow-up he wrote. Other things worth reading are a WaPo article detailing five myths about the Vietnam War, and a Mercury News article interviewing both American and South Vietnamese troops about the problems with the documentary. (A tip of my hat to all who provided me with these links.) [UPDATE: My friend Earl directed me to a post about all the other myths in our post-Vietnam world, the ones that the WaPo did not address.]

Thus, Burns promulgates the same propaganda that the Left used to drive the anti-war movement in 1968: a photograph without its necessary back story.

There’s one other striking omission from the documentary when it comes to LBJ’s conduct of the war: The word “Democrat” is never mentioned in connection with him. I think we hear the word “Democrat” mentioned once in connection with Eugene McCarthy and Bobby Kennedy, but I’m not sure. All I know is that I was struck when Peter Coyote sonorously declared that “members of the President’s own party” were starting to get cold feet about continuing to prosecute the war. And what party would that be, I asked myself. No answer was forthcoming.

Burns also included in the Tet Offensive episode the first few chapters in the personal narrative of Hal Kushner, a doctor who found himself a prisoner of the North Vietnamese. It’s a riveting story, from the helicopter crash that saw him captured, to the wounds he suffered and the torturous “medical care” he received, to the 30 night hikes he was forced to undertake, wounded and barefoot, through the jungle to a place of captivity. We’re just in the beginning of Kushner’s ordeal, but it’s already traumatic listen to his sufferings immediately after his captivity.

Overall, I think Burns did a good job covering the Tet Offensive itself — and he had a lot of help with this because of the superb contemporaneous footage. This episode, however, suffered from the same flaws as the other episodes: there aren’t actual misrepresentations, there are just absences.

There are no Americans or South Vietnamese troops interviewed who still think it was a good war, although badly mismanaged. There’s no back story for the pivotal photo that supercharged the anti-war movement in America. And of course, there’s the exquisite care taken not to tar the Democrat Party too closely with the Vietnam War brush. In other words, despite all the information the show provides, it’s just another piece of Democrat Party anti-war propaganda.

(For those wondering why I stopped updating my posts about Hillary’s What Happened, the answer is that I couldn’t make myself read more. It was like being trapped in a room with the world’s most boring, self-involved, narcissistic person. Every time I even saw the book’s cover image in my Kindle App, I had a sense of revulsion I couldn’t overcome. I was relieved when the due date came and my library sucked the book out of my App.) 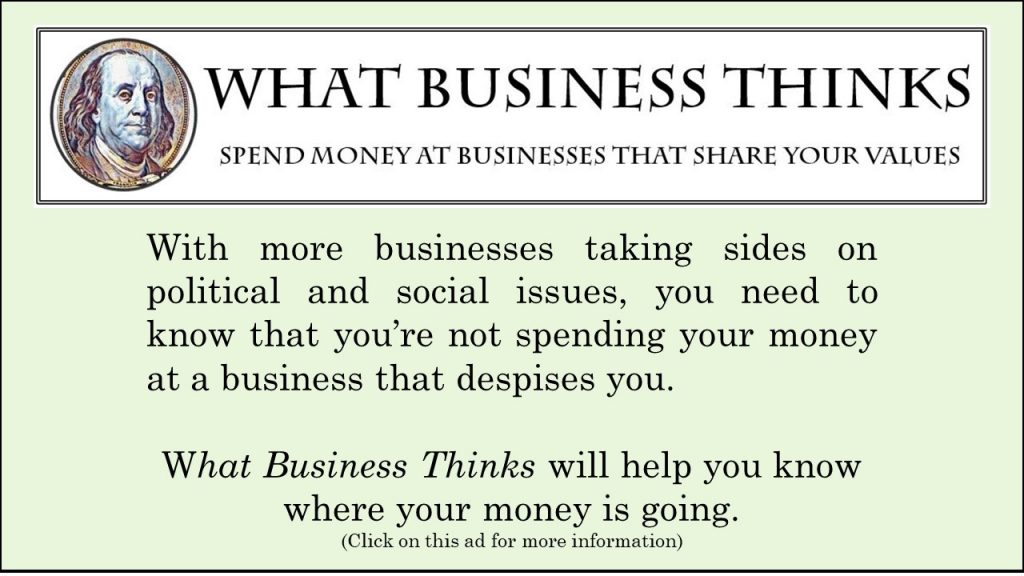