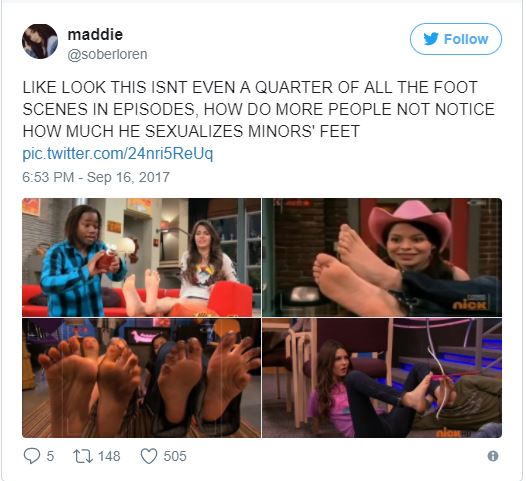 A post in which I opine about Hollywood sex scandals, pedophilia, dirty old men, and the many choices people make that enable truly bad behaviors.

Looking at the bloodletting that’s spreading from Hollywood, to the mainstream media, to Leftist hi-tech corporations (e.g., Amazon) led someone, and I can’t remember who it was, to note that the people who are being exposed as monsters who prey on women and children have spent decades aggressively pushing laws that disarm women and ensure that children can get easy, “no-fault” abortions without a parent’s knowledge or consent. I think that’s an exceptionally fine observation.

The news that Dan Schneider, a producer at Nickelodeon, is quite possibly a pedophile and quite definitely a pervert, doesn’t surprise me. (Follow this link for the full flavor of Schneider’s perverse conduct.) As I said when the Weinstein scandal first broke, the really dirty secret at the heart of Hollywood is pedophilia.

I learned about this abscess in Hollywood’s core more than 20 years ago when a guy I dated who had worked in Hollywood casually noted that the producer of a film we were seeing was a “known pedophile.” My friend knew this only as hearsay, but he considered it one of Hollywood’s open — and entirely unexceptional — secrets.

After puzzling about that memory for a few days, I suddenly remembered the producer’s name — but I’m not going to say it here. My knowledge is hearsay on hearsay, so anything I write would be slanderous. However, I’m going to keep a close eye out to see if this guy’s name pops up when the Hollywood pedophilia scandal finally breaks (as it inevitably will). What is certain is that this guy, whom I’ll call “R,” is a producer with a reputation for being horrible — really abusive to subordinates. The question will be whether this abuse extended all the way to the kind of pedophilia that Corey Feldman is trying to expose.

The last thing I want to say is that many of the women who put up with the Weinsteins and Schneiders and Halperins had choices. Please note that I say “many of the women.” Those women who were physically assaulted, with the man relying upon his greater strength to commit an act of violence had no choice. I’m also not talking about Sophie’s Choice kind of choices, or “starvation is the only other option” choices, or “do this or die” choices.

Instead, I’m talking about “I really want this role,” “I really want this story,” and “I really want to work in this town again” choices. I’m not trying to say those are easy choices. They’re horrible, unfair choices. Frankly, if you have to choose between losing your dream job versus living with the disgust of having watched your boss masturbate into a plant or the revulsion of having to massage his naked skin, both paths have pros and cons. And they’re still choices. At all times when these women were not being physically overwhelmed, they could have walked away and they could have talked. They chose not to.

The argument I expect in opposition to the above paragraph is that women have never had a choice. Men have always treated them like sexual objects and they’ve always had to put up with with, at worst, being physically assaulted and threatened or, at best, with being demeaned, mentally, physically, and emotionally — and that these suffered this way just to achieve life’s basic necessities: financial security, career success, safety from even more dangerous predators than the one walking around naked in their presence.

I agree wholeheartedly. The biological reality of the world is that, as long as men don’t have monthly periods (which can sideline many women entirely), don’t get pregnant, don’t breastfeed, and just don’t need to be there for their children in the way a mother does, it’s going to be very hard to pry their hands from the levers controlling vast sectors of society. And when people have power, they abuse power.

But accepting that premise as true still doesn’t mean that women in late 20th and early 21st century Hollywood, the Mainstream Media, and Silicon Valley don’t  have choices. We are not living in 2,300 B.C. Egypt or 1430 A.D. Europe or 2017 A.D. ISIS territory or Iran or Saudi Arabia. We are living in America, a place in which a woman can give up her nascent career in Hollywood if the price is too high and become a realtor in Tampa or a business executive in Boise or a nurse or doctor in Malibu. All the ones complaining now, the ones who weren’t raped but who were humiliated and oppressed, chose to stay in Hollywood.

I’m not criticizing their choices, incidentally. We all make choices, some good, some bad, some smart, some stupid. I’ve made more than my fair share of stupid, bad mistakes, and I live with the consequences of them still. I don’t need pity, though (despite occasionally enjoying a pleasant bout of self-pity), and I don’t need society to change on my behalf. It was what it was when I made the choices and it is what it is now that I’m living with the results.

But I’ll tell you one thing about these Hollywood and Mainstream Media and Silicon Valley men and women: On both sides of the gender divide, they’ve been nothing but loud in their condemnation of sexual harassment and assault and, worse, even louder in proclaiming their unblemished virtue when it came to taking a stand against those misogynistic ills. And they were lying, both men and women, through their teeth. The men were dishing it out and the women (and many men) were taking it. They were mired in sin and still casting stones like crazy.

At the end of the day, the only true victims in Hollywood are the children, the ones who parents and guardians allowed these helpless young beings to swim in this fetid water. These damaged children are the ones who turn to drugs and alcohol and, sometimes, the relief of insanity, and they’re the ones who should earn our endless pity.

Just as I’m sickened by the true sexual abuse in Tinsel Town, I’m also sickened by the actresses and others going after former President George G.W. Bush. I never liked the guy, but the fact that these stories involve him in the now — when he’s an extremely debilitated, 93-year-old man with Parkinson’s — rather than in the past is telling.

Here’s a fact of life: Some old people, both men and women, when in the grip of dementia or other life-ending diseases or processes, lose their social controls. The brain erases them, leaving these people as much at the mercy of their sexual selves as a male dog scrabbling at the door to reach a bitch in heat. These social controls, of course, are the difference between a person of rectitude and a Weinstein or Schneider (or Polansky or Clinton or Allen or. . . .).

I speak from experience when I say that perfectly decent people who were models of rectitude throughout their lives lose as their filters as their brains age and sicken. I first saw this decades ago in a male relative who suffered from catastrophic brain damage. He was non-verbal, confined to a wheel chair, and lacked even the motor control to feed himself. Nevertheless, one day, his palsied hand reached out and grabbed my breast. I didn’t then, and don’t now, think he sexually harassed me. The man who had been — the sweet, kind man I’d known throughout my childhood — was long gone. In his place was an almost completely paralyzed person with no sense of self any more and no sense of familial relations. What happened at the moment he reached for me was that some small part of his poor, damaged brain still thought, “I’m a man. She’s a woman. Let’s give it a try.”

I saw the same thing years later with my parents, both of whom began showing signs of dementia at the end of their lives. That’s why my prim, proper, entirely heterosexual, and completely Victorian mother, when she was a shrunken, bent, and wrinkled 92, earnestly assured me that a young, very beautiful, female physical therapist had said “Mrs. Bookworm Sr., I’m crazy in love with you and want to have a sexual affair.” Having dropped this bombshell, my mother looked at me through her rheumy, partially blind eyes and said, “I thought about it, but I eventually told her that, while I was flattered, I didn’t think it would be a good idea to have an affair in a nursing home.” I am as certain as it’s possible to be that this interaction never occurred.

My father, when he was very ill, was like Bush Sr., in that he became a little too touchy-feely with women who were not family members. My mother was horrified when her friends women told her what had happened. It was a great comfort to her when our family physician assured mom that my father was not revealing his true self as a masher. Instead, as his illness progressed, his social controls had broken down. His behavior was driven as much by dementia as it was when he’d sit in his parked car, gripping the steer wheel like a Vickers machine gun, worriedly scanning the San Francisco sky for Nazi bombers.

There never (and is not now) a breath of scandal around George H.W. Bush’s interactions with women before age and disease made him their own. That tells me that Bush is not a Weinstein or a Schneider (or a Clinton or an Affleck or a Toback). He is, instead, a very old, sick man whose social controls have finally broken down. To humiliate him in this way is a terrible thing.

(And yes, if the floodgates open tomorrow and I learn that Bush Sr. was always a grabber and masher — well, I’ll change my tune then and stop giving him the “old age and illness” pass.)