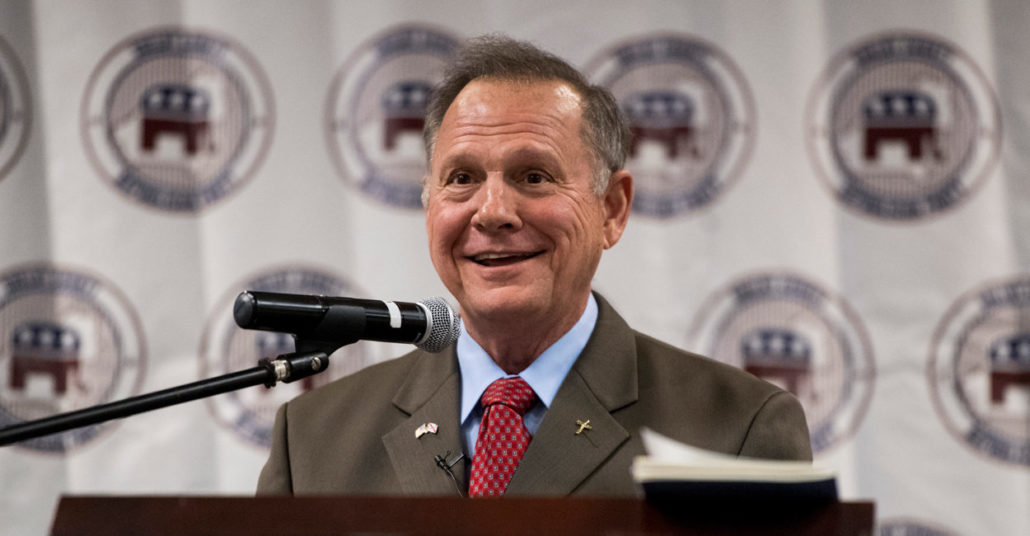 The difference between Roy Moore’s situation and the Hollywood story, the unreliable accuser, and the WaPo’s manifest bias, means I currently believe Moore.

Sorry for the long silence, but it’s been an all family, all the time few days, interspersed with a quick-turnaround legal research project. I’ve been a bit insulated from the news, but have not missed the claim that Judge Roy Moore molested a 14-year-old in 1979. I find myself peculiarly unconvinced that he did something wrong.

The question is whether I’m being a hypocrite, because I was so ready to accept that the Hollywood types have done wrong, while I’m currently still willing to give Roy Moore the benefit of the doubt. Here’s my reasoning, so you can see what I think and tell me if there’s merit to my argument or if I’m lying to myself. First, here are the reasons I believe that some, although perhaps not all, of the allegations about Hollywood types are true:

1. Hollywood has had a reputation as a sinful fleshpot for 100 years.

2. We know with near certainty, based upon decades of memoirs, that the casting couch was a real thing.

3. We know from looking at the Hollywood product in the last couple of decades that Hollywood has no room for conventional middle-class morality.

4. In the case of Harvey Weinstein, he was caught on a wire admitting that he’d sexually assaulted a woman — only to have the case dropped when he donated a nice sum of money to the prosecutor’s campaign fund.

5. Hollywood circled the wagons around Roman Polanski, who had pleaded guilty to drugging and sodomizing a 13-year-old.

6. Hollywood circled the wagons around Woody Allen, who had an affair with (and took naked pictures of) his own adopted daughter. The jury is out on whether he sexually assaulted his other daughter, Dylan, because it may have been a vicious lie in a hard-fought separation with Mia Farrow or he may be a vile pedophile. Significantly, Rowan Farrow believes absolutely that his father assaulted his sister.

7. The accusations regarding figures in Hollywood and the mainstream media are blue on blue. That is, it’s Progressive reporters, writing in Progressive outlets, attacking Progressive producers, directors, actors, and media figures. It’s also Progressive actors and media figures making allegations against their own kind. In other words, the accusations are not intended to defame Progressives. They are truly directed at the alleged conduct. That makes them seem more credible to me, because it lacks a larger political agenda.

And here are the reasons I’m dubious about the charges against Roy Moore (as of now):

1. The timing is suspect. Although Roy Moore has been a controversial figure in the public eye for forty years, this apocalyptic story was never even whispered about before. Instead, it hits now, right in the middle of the sexual harassment zeitgeist. More than that, though, although sexual harassment has been at the top of the news for weeks now, this unexpected narrative “coincidentally” erupted just when it was too late to remove Moore from the ballot and substitute another Republican candidate. In other words, rather than appearing to be a legitimate complaint, it appears to be a classic October surprise — even though it actually happened in November.

2. The story is almost forty years old. As I mentioned with regard to Trump and the stories about him, there is something of a pass for old acts. After all, that’s why we have a statute of limitations for most crimes other than murder: memories and, in the case, mores change. Even assuming solely for the sake of argument that the charges are true, the reality is that, back in 1979, we were in a very different moral cycle. In hippie territory, everyone was having free love, including young teens. And in deep South territory, people still weren’t that far away from Jerry Lee Lewis’s 13-year-old wife. While that 13 year old raised eyebrows, viewing young teens as viable wives or girlfriends wasn’t alien to Southern culture.

3. Paul Mirengoff, no friend of Moore, points out that the woman making the charges is apparently emotionally unstable. More than that, she has a habit of accusing men of sexually harassing her. Maybe they did, especially since she was a vulnerable, suicidal, teenage drug and alcohol addict — or maybe she’s a few cards short of a full deck. This is not a credible witness.

4. I simply don’t believe the WaPo’s reporting in this instance. As I mentioned above, the stories about Hollywood and other media are Progressive on Progressive attacks, so the political angle is absent.  Here, however, we’ve seen for the past two years that the WaPo functions as the media arm of the Democrat Party (and, when necessary, of those in the GOP, such as McConnell, who are still fighting a rearguard battle against Trump and Trumpism). When a media outlet is that manifestly partisan, why in the world would people believe it when it publishes a well-timed attack (see point 1, above) to destroy the political opposition?

So, am I justifying the unjustifiable or am I accurately reading the credibility of this latest attack against a Trumpinista candidate?

UPDATE: I think John Hinderaker is saying the same thing I said.