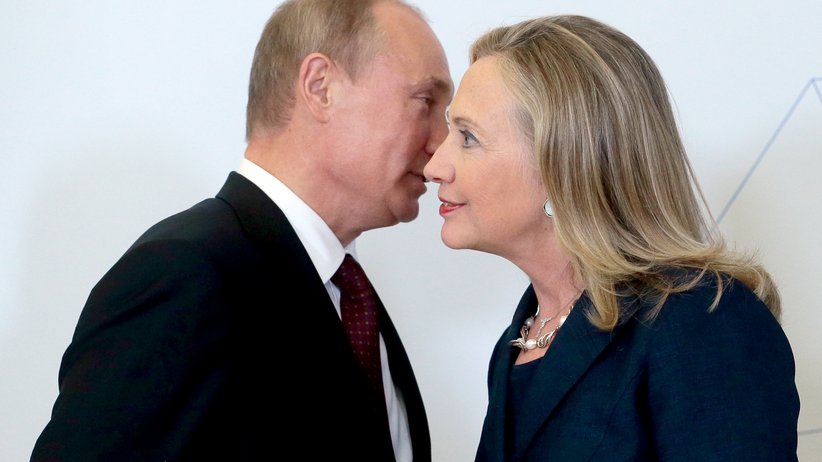 The real Russia collusion — Obama and Clinton team with Russia against Trump — makes sense if you look at the motives driving the various actors.

Da Vinci once said that “Every action needs to be prompted by a motive.” Motive is certainly a helpful tool when it comes to bringing an organizing principle to the sprawling, chaotic Russia collusion — the real Russia collusion. The real one isn’t the fake claim that Trump, who had no contacts in Russia, partnered with Putin, who had no reason to root for Trump, during the 2016 election cycle. Instead, I’m talking about the real Russia collusion, one that sees more evidence every day to support it. This is the one that says that Obama and Hillary, along with all their high level minions, conspired with Russia to keep Trump out of the White House.

You might not believe it from my blog silence about the unfolding Russian collusion, but I am paying attention. I daily read multiple articles analyzing the Nunes Memo, and the Grassley-Graham letter. I try to keep track of the cast of players: (1) the various swamp crawlers, from Hillary to Blumenthal to Brennan to Simpson to Shearer; (2) the surprise guest appearances from Obama administration players such as Rice, Lynch, and (3) the rotating cast of regular players at the FBI and the DOJ, from Comey to Strzok to Mueller. Looking at it this way, it’s pretty clear that one of the things that’s truly Russian about this whole scandal is that it has the complexity and character count you’d find in War and Peace or some other epic Russian novel.

After reading and reading and reading, I have to admit that I’m still confused about the specifics (timing, facts, lies, laws lying in smoking ruins, etc.). Nevertheless, the overarching picture emerges clearly from this welter of data: Trump did not collude with the Russians to win the election or betray America, although there were people who were temporarily on the very periphery of Trump’s campaign who would have liked to have seen Trump be even more friendly to Russia than Obama and Hillary already were. Instead, it was the Hillary team, with help from the Obama administration, that either colluded with Russia or were Russia’s patsies in trying to set up Trump.

Understanding which is the real Russian conspiracy has the unexpected byproduct of bringing people’s obvious or known motives into alignment with the emerging facts. The original story, the one that had Trump as the conspirator, never made sense, because neither he nor Putin had a motive to do what they were alleged to have done. Thus, it never made sense that Putin would collude against a Hillary presidency. Indeed, the last thing Russia wanted was for Trump to win. After all, despite his stated willingness to work with Putin, Trump was shaping up to be a nightmare for Putin for one very specific reason: Drill, baby, drill.

Under Putin’s corrupt oligarchy, the Russian economy is a wasteland. Its main reliable source of wealth is oil. The Obama administration’s ongoing efforts to destroy America’s oil-producing abilities were a boon to the Russians. Trump’s stated desire to bring America’s oil back on-line was something Putin would have wanted to avoid at all costs. It was also unclear whether Trump would continue to follow Obama’s lead when it came to Ukraine, Central Europe generally, Syria, and Iran — in all of which locales Obama had withdrawn from traditional American friends or funded foes and, when possible, handed power to Russia.

That’s why, when Steele and others (Brennan? Shearer?) came sniffing around seeking dirt on Trump, Putin and his spymasters must have been beyond thrilled. They knew Hillary could be bought; they knew Hillary would continue Obama’s effort to handicap America’s energy industry; they assumed that Hillary would follow Obama’s disreputable patterns towards traditional American friends and foes; and they probably had enough blackmail material on Hillary to last for six terms, not just one or two. (Not the least of which, as Trump pointedly joked during the campaign, would have been those 30,000 emails Hillary erased from her unprotected server, but which the Russians had probably hacked years before. Even without that, the Russians almost certainly had information about Bill’s myriad indiscretions, Benghazi, and the whole Clinton Foundation.)

Motive is even easier to find with Obama and Hillary. Obama had a legacy to preserve. Obama, who has never been a fool although he is a knave, understood that his legacy was built on sand. Except for Obamacare, he had no major legislation. All he had were executive orders, regulations, “Dear colleague” letters, and a host of other ephemeral directives that would become embedded in America culture only if a subsequent administration made it clear to true believers in government and education that these legal simulacra needed to stay to complete America’s fundamental transformation.

As for Hillary — well, heck, Hillary understands that, if you want to win, you have to cheat. She didn’t cheat hard enough in 2008, but in 2016, by God! She was going to cheat and she was going to cheat big, thanks in large part to the Obama administration’s willingness to support her win at all costs philosophy.

So, if you want motive for collusion, you have it with the Obama administration, the Hillary campaign, and the Putin administration. All of them had a vested interested in ensuring that Trump lost.

But one still has to ask why would career civil servants be so willing to join in? Sure, Trump talked about trimming back the civil service, but everyone talked about it and nobody did anything about it. I think there must have been more than mere job security at issue for same many upper ranking members of the FBI and the DOJ willingly to jettison laws, procedures, and their own past histories of relatively upright behavior.

Before I go on, let me say that I’m not talking about people such as Brennan, whom I believe to be completely corrupt, or truly evil hangers-on such as Blumenthal and Shearer. I’m talking about the others, including people like Comey and Mueller. They were always political and played hard ball to advance their careers, and they were unethical in a “cut-throat office politics” sort of way, but no matter how one points out their viciousness and failures of intelligence, before now, they’d never crossed the line. Had they walked right up to it and put their toes on it? You bet. But cross it ? No.

To answer that question, I’m going to leave Washington, D.C. in the second decade of the 21st century and go back in the late 1970s and early 1980s in San Francisco. I came into the picture in the late 1980s, so I don’t have first-hand knowledge of what I’m about to say. I only have information I gleaned later from talking to an attorney I respected, who was intimately involved in the matter. Here’s the story I want to tell:

George Somebody-or-Other, whose name I can’t remember for the life of me, was a San Francisco businessman, who bought and developed real estate. He was also a con man and a crook. He was able to get away with as much as he did for as long as he did because he created a network of corrupt inspectors in San Francisco’s building department.

It was this last point that the attorney and I ended up discussing. When I he told me about the embedded corruption in City Hall, I, a San Francisco native, was surprised. I knew that, back at the turn of the last century, San Francisco had a famously corrupt mayor and, because the mayor set the tone, the rest of the city government wasn’t so great either. After the 1906 earthquake, the larger part of San Francisco’s city government ended up being investigated for (and found to have committed) serious graft. When

However, when I was growing up in San Francisco in the 1960s through 1980s, while everyone knew that “pay for play” was not unknown in City Hall, the reality was that San Francisco was not considered an exceptionally corrupt city. Most city employees just did their job.

When George came along, though, many of these city employees turned to the dark side. The lawyer had an interesting theory about that: George, he said, had the uncanny knack for spotting the vein of corruption that lives in most people — even those who consider themselves absolutely honest and above wrongful deeds — and then exploiting that vein. Many of the people who got caught in the net with George were the type of people who wouldn’t even jaywalk; but for George, because of his persuasion, they abandoned a lifetime of rectitude.

I suspect that one of the reasons the ordinary civil servants (including Strzok and his girlfriend) in the FBI and the DOJ abandoned their former fealty to the rules was that the Clintons and the Obamas are like George. Their magic won’t work on those who hold political ideologies fundamentally opposed to theirs, but will work on those who can be convinced that the cause requires them to “break free” from the straight jacket of rules in which they’ve wrapped themselves.

Every step along the way, these civil servants, all of whom significantly are in the law and order branches of the government, will be told that what they’re doing is barely a toenail over the line — and that it’s for an infinitely good cause. They’re not being asked to break the law, just flex it a little to save the country. Put this way, rules begin to seem not just insignificant, but downright dangerous what someone who understands you frames the issue correctly.

While George preyed on those in San Francisco who had hidden earnings for wealth, the Obama and Hillary crew were preying on people (a) who chose “white hat” careers in which they were on the side of truth, justice, and their understanding of the American way and (b) who genuinely despised Trump and everything he stood for and who loved Obama and Hillary and everything they stood for.

We conservatives have become accustomed, of late, to talk about a Civil War that sees “We the People” versus the Swamp Creatures. Those in the Swamp, though, saw things a different way (again, look at Strzok’s and his girlfriend’s text messages):  They too saw a Civil War, but it was one that pitted right-side-of-history Progressive knights against a slobby, racist, bigoted candidate and his deplorable followers, all of whom wanted to undo the magic of the Obama years.

That’s why, when Hillary and Co. came looking for help, Putin would gladly have given it to her — and almost certainly did. And once that information left Russia and landed on American shores, Obama, who knew that his legacy was as fragile as old bones, willingly worked with Hillary to engage the engines of government to entangle Trump in Putin’s net of disinformation.

Lastly, Obama’s willing minions aided and abetted this misuse of government — everything from a fake investigation into Hillary’s real national security violations to a viciously real, and quite illegal, investigation into faked claims about Trump’s Russia collusion — because they were born up on a tide of idealism and hatred that made them vulnerable to Obama’s and Hillary’s ability to find the vein of corruption in every person and to subordinate that rich vein to their unconstitutional ends.

UPDATE: Wolf Howling’s latest reminds me that, while I struggle in this post to understand why so many rank-and-file critters would go from toeing the line to crossing the line, I’ve never been confused about the motives of those near the top of the tree: I described them as operating from motives of “bias, entitlement, arrogance, and corruption.” (I believe I also added self-righteousness in my exchange with Wolf Howling.) Having been reminded of my own words, I stand by them.