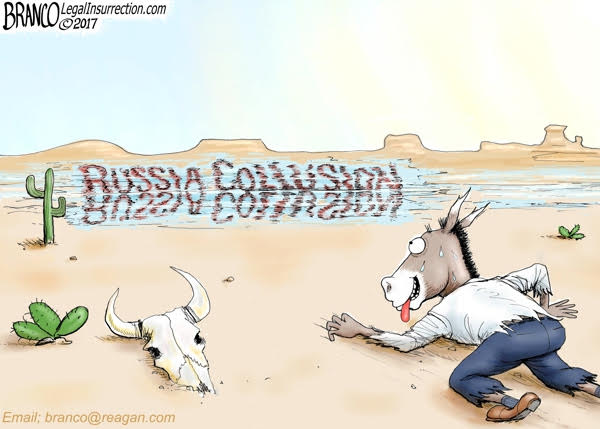 Rep. Adam Schiff, one of the four Congressional Democrats with the clearance to actually put eyes on all of the top secret documents made available to date by the FBI and others as part of the House Intelligence Committee investigation, made a jaw dropping admission in so many words while answering media questions.  He admits he has seen no evidence to date to establish any sort of criminal conspiracy between Trump and Russia.  In other words, more than a year into this politically-driven investigation, there is no Trump-Russia Collusion.

So, if there is no evidence to support any of the allegations, when are we going to start investigating to determine whether this was a criminal enterprise involving Christopher Steele, CIA Director John Brennan, Fusion GPS, the DNC and others to throw the election to Clinton, destroy Trump’s presidency, and protect corrupt government officials?

Lee Smith, writing at The Federalist, looks in detail at how senior figures in the media, namely  New Yorker editor David Remnick, Atlantic editor Jeffrey Goldberg, former New Republic editor Franklin Foer, and Washington Post columnist Anne Applebaum, coordinated with Fusion GPS and the DNC to create an echo chamber, driving the Trump Russia collusion narrative.  It is a sordid story that needs to come out as well.

On a related note is a Ted Talk given by Sheryl Attkinson, where she not only puts in perspective “fake news,” but identifies the source of the fake news controversy, much of which involves the Trump-Russia narrative, with a starring role from a Google owner. The progressive left has used the mantra of “fake news” to justify their creep into censoring conservative voices.  I’ve long believed that social media sites and the major search engines are so powerful that they need either to be subject to anti-trust litigation and / or they need to be required to adhere to the First Amendment as if they were a public institution.

At National Review, former DOJ attorney Andrew McCarthy looks at the Rice CYA memo and connects the dots.  It seems there really was a conspiracy, but Trump had nothing to do with it. Instead, it involved Obama, Comey, Sally Yates and others, acting at a minimum to hide the scope and nature of the Trump-Russia investigation — including that it was all based on research paid for by the DNC — from Trump himself.  It is outrageous if McCarthy is correct, and his detailed explanation does seem reasonable.  It also makes me wonder if the appointment of a special prosecutor charged with conducting the entire counter-intelligence investigation wasn’t baked into the cake at this meeting?  We need to know everything there is to know about that meeting.

One of the more obscene events in the investigation surrounding the collusion narrative was the political assassination of Michael Flynn.  Flynn subsequently was strong-armed by Mueller into pleading guilty for perjuring himself during an FBI interview   Sentencing was supposed to take place just a few days ago but was postponed until May.  Former DOJ attorney Sidney Powell throws light onto what is probably going on — that the prosecution did not provide critically important exculpatory evidence that the FBI agents who interviewed him thought that he had not lied — to Flynn before battering into a guilty plea.  Everything about the Trump-Russia collusion narrative and the Mueller investigation stinks to high heaven.

I have been pointing out for two years now that the single most basic claim regarding the Trump-Russia collusion narrative, that the Russians “hacked” the DNC server, remains unproven.  The only source for this claim comes from another DNC paid organization, one hired at the same time as Fusion GPS, Crowdstrike.  The FBI has turned our nation upside down with the Trump-Russia collusion narrative and their incessant media leaks, and yet almost two years after the hack, has not conducted their own independent inspection and analysis of the server.  This is beyond inexplicable.  Given both the collapse of the Trump-Russia Collusion narrative and the fact that, almost two years after the murder of Seth Rich, the man Julian Assange intimated was the source of the leaks, the server has not been examined to prove or disprove that claim, the server needs to be taken into evidence.