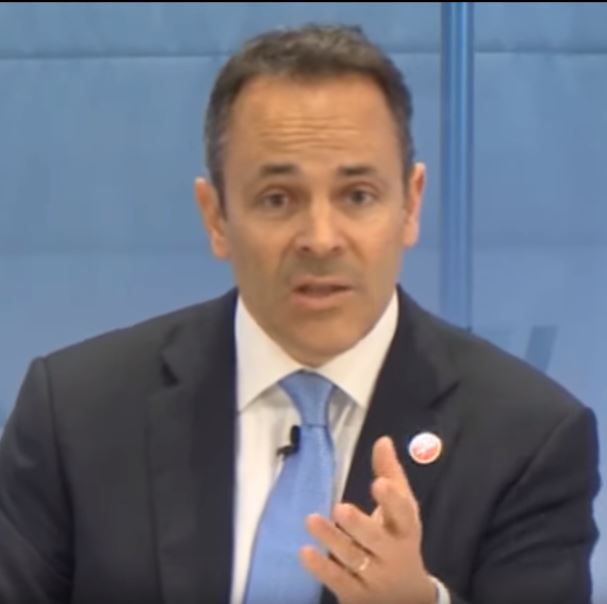 My thanks to lyn5 for making me aware of the way in which Kentucky Governor Matt Bevin responded to a question asking him how he squared his support for the Second Amendment with his professed interest in child welfare. Bevin’s answer is extraordinary on many levels: He’s calm, master of his facts, and an organized thinker.

Bevin also very politely lets those viewing the video know that, in response to his calm, organized, factual response, the woman who asked the question, who is off-camera, is smirking and rolling her eyes. The video therefore encapsulates not just the strong moral and intellectual argument behind simultaneously supporting the Second Amendment and child welfare, but also the lack of good faith and good grace coming even from those Leftists who purport to be temperate and reasoned.

I have no quarrel with any of the points Bevin makes. He’s correct that we live in a culture that teaches children that individual life is not valuable. Whether its pron,* abortion, euthanasia, or video games, we repeatedly tell them that it’s okay to demean or destroy lives that are inconvenient or, heck, just to demean or destroy them for fun.

He’s also correct that too many parents are completely disconnected from their children’s lives. Even in my own, tight-knit neighborhood, it’s not always easy to track what youngsters are doing — and we are all engaged parents trying hard to stay on top of things. Moreover, I’m lucky enough to live in a neighborhood in which the parents, although all Progressives, practice remarkably conservative values that they try to pass on to their children. In communities with less engaged parents, or parents who don’t have traditional values, too many children raise themselves (with help from pron, video games, and a media pushing a hard-Left agenda that devalues humane life).

Speaking of parents, I know that, if Bevin had not been speaking off the cuff and had been given more time to prepare, he would have said something about a very specific parent: Daddy. We know, because endless studies tell us so, that children raised without involved fathers have problems. The boys are more inclined towards criminal activities and the girls are more likely to be promiscuous.

One could argue that, in the years following WWII, a lot of kids grew up without fathers and these kids didn’t shoot up schools. I think, though, that the difference is that the father who died overseas didn’t abandon the child voluntarily. Moreover, the culture was different. Boys weren’t being told they were toxic, women weren’t announcing that they didn’t need men at all, and there was a greater respect for life in the womb and in the old age home. In other words, the cultural messages attendant on fatherlessness were different.

Lastly, I’m sure that, given the chance, Bevin would have commented upon the epidemic of boys whose natural energy is pathologized. The anti-male message that is the core of Third Wave feminism and American schools’ fear of lawsuits, we’ve reached a point at which American schools are padded cells for boys.

In class, they’re bored as lessons focus on subjects that interest girls (feelings, not action) and are forced to engage in that highly feminized activity of sitting still. Nor, as in days of old, can the boys run off their energy in the school yard. Recess times are cut to the bare minimum, competitive games are banned because those who lose might feel bad, and any activity that might result in physical injury is banned for fear of parental lawsuits. School is every active boy’s nightmare: boredom and stillness in class, minimal activity during short intervals between classes.  The logical response — and one proven to work — is to give boys more true play time.

So, when boys’ bodies and brains rebel do they give them more play time? No. They drug them. They give them . . .

If you’ve noticed that a lot of those drug names rhyme with “methamphetamine,” you’re not imagining it. They are.

In young children diagnosed with ADHD (aka “not enough play time”), methamphetamines seem to have a paradoxical effect, allowing them to ignore that excess energy and to sit and focus. Maybe this makes sense for a 10- or 12-year-old boy, but the reality is that these young people end up taking prescription meth for years, through childhood, adolescence and into young adulthood.

With this is mind, it’s useful to know what happens with meth abuse:

In addition to being addicted to methamphetamine, chronic abusers may exhibit symptoms that can include significant anxiety, confusion, insomnia, mood disturbances, and violent behavior. They also may display a number of psychotic features, including paranoia, visual and auditory hallucinations, and delusions (for example, the sensation of insects creeping under the skin). Psychotic symptoms can sometimes last for months or years after a person has quit abusing methamphetamine, and stress has been shown to precipitate spontaneous recurrence of methamphetamine psychosis in formerly psychotic methamphetamine abusers. (Emphasis mine.)

I don’t think it’s a coincidence that many of the young men who went on murderous sprees are known to have been on (or reputed to have been on) many of the drugs in the above list, all of which they started taking under a doctor’s orders. Certainly, the killer in Parkland, Florida (whose name I deliberate omit here) had suffered a shock when his mother died in of the flu last fall. He was already fatherless, having started out as an orphan, after which his adopted father died as he was edging up to adolescence. I’ve also seen an unsubstantiated (but eminently believable) suggestion that he was yet another troublesome American boy on psychotropic drugs.

When you have a generation of boys who are systematically demeaned by the dominant, Third-Wave feminized culture; who accurately see the media’s crusade for abortion and euthanasia as a profound disrespect for human life; who spend hours a day playing games in which they are encouraged to kill and brutalize characters who look startlingly human; who no longer crave female companionship, or are unable to make connections with real women, because they have an endless supply of violent, mechanistic, “unloving” (for want of a better word) pron; who have no fathers involved in their lives, whether because the fathers have died, were never around or, even when around, don’t give a damn; and who are given drugs that cause violence and paranoia — well, I’m thinking Governor Bevin is correct when he says that guns are the least of the problem.

It’s noteworthy that, when you look at all of the above problems, they emanate entirely from Leftist belief systems and policies. Acknowledging them would mean that Progressives would also have to acknowledge that all the changes they’ve insisted upon in American culture are profoundly damaging. It’s a lot easier to blame the gun, even though it’s just an inanimate object in the hands of boys that our culture has turned into paranoid, violent killers.

*”Pron” is a deliberate misspelling to keep trolls away from this blog and to comply with Google AdSense requirements that the blog not to an enticement for those seeking pron.