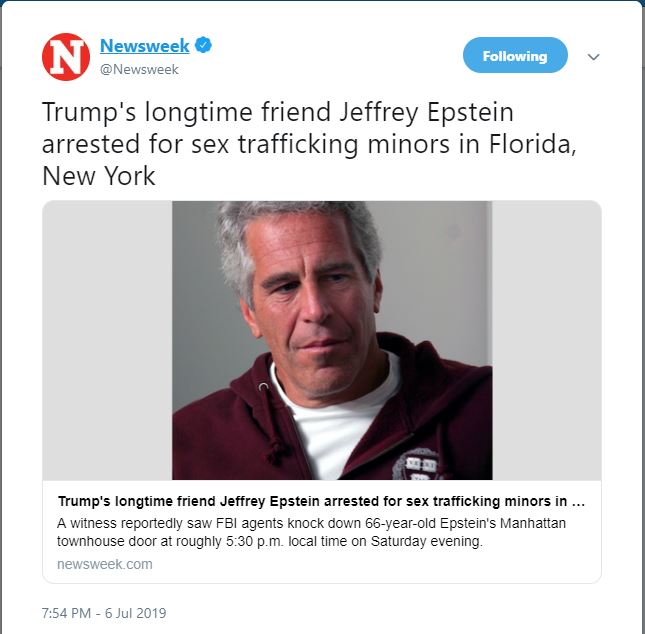 My sense is that Jeffrey Epstein will not hurt Trump, even if Epstein names names, because Trump is all about stopping pedophiles, not being one.

I first learned about Jeffrey Epstein’s arrest for sex trafficking when I saw this tweet from News-weak:

I found News-weak’s framing to be interesting, to say the least, given that the politician mentioned most frequently in connection with Jeffrey Epstein isn’t Trump but is, instead, Bill Clinton. After all, it’s Bill Clinton who famously flew at least 26 times on Epstein’s plane to the latter’s infamous “Lolita Island.” Clinton also apparently ditched his Secret Service agents for at least a few of these trips. Those are facts, not rumor. I leave you to draw your own conclusions about Clinton’s behavior.

Another tweet makes it clear that Trump, while he may have said nice things about Epstein (probably because it’s his usual shtick to compliment people who is not his enemies), nevertheless appears to have steered very clear of Epstein’s unsavory activities and, indeed, to have meted out what consequences he could to Epstein:

As of now, I’m not too worried about Trump being swept into the hopper with Epstein and his activities.

I’ve also seen Leftists make accusations against Alan Dershowitz, claiming that he too will be caught up in Epstein’s wake. Again, I have my doubts.

Dershowitz is an interesting case because he’s completely honest about Israel, which ought to reveal to him that the Left is dishonest about everything. Nevertheless, he continues to self-identify as a Progressive.

You’d think that Dershowitz’s 98% Progressive track record would keep him in good odor with his fellow Leftists, but that’s not the case. Because he supports Israel, the Left is trying to destroy him. The engine of this destruction is the claim that Dershowitz, who represented Epstein as a defense lawyer in 2008, traveled on Epstein’s Lolita Express airplane and partook of the underage offerings on Lolita Island. Dershowitz has vigorously challenged these claims, but they dog him nevertheless.

What makes me believe that the charges against Dershowitz really are the garbage he says they are is the fact that it was Dershowitz, working with Mike Cernovich, who obtained the documents that re-opened the case against Epstein. Logic says that opening sealed records is the act of a man sure of his innocence. Were Dershowitz guilty as alleged I would imagine he would be working hard to keep all records sealed forever.

Generally speaking, what’s happening now reminds me of what happened a few years back in England, only the consequences here are going to affect the living, rather than rearrange the memory of the dead. To refresh your recollection about England’s pedophile sex scandal, it started after the death of BBC personality Jimmy Savile (or, to use his honorifics, Sir James Wilson Vincent Savile OBE KCSG), long-time host of the popular Top of the Pops. What emerged then was the undisputed fact that Savile was a major, extreme, highly-predatory pedophile. When his crimes became public, Savile was already beyond the reach of the law, so one can only hope that a higher power is giving him the punishment he so richly deserves.

The posthumous investigation into Savile’s conduct opened the floodgates. It turned out that, starting in the 1960s and continuing through the 1980s, what seemed like battalions of famous British media and political figures either participated in Savile’s pedophilia or covered it up. Moreover, the BBC — a so-called news outlet — knew about these people (some of whom it employed) and, rather than covering such an obvious news story, also engaged in a cover-up.

As my post caption notes, though, I want to make a bigger point than Epstein’s arrest: Starting from Day One of his administration, Trump has been quietly but powerfully focused on bringing down pedophiles and sex trafficking:

President Donald Trump is making good on his pledge to use the “full force and weight” of the U.S. government to break up child sex trafficking rings and lock up sexual predators.

Since Trump was sworn in, authorities have arrested more than 1,500 pedophiles in the United States.

“This should be one of the biggest stories in the national news. Instead, the mainstream media has barely, if at all, covered any of these mass pedophile arrests. This begs the question – why?” Liz Crokin wrote for Townhall.com on Feb. 25.

The numbers are “staggering” when compared to the less than 400 sex trafficking-related arrests made in 2014 according to the FBI.

Keep in mind that the above article was published only a month into Trump’s presidency.

Moreover, when I read the news lately, especially the Daily Mail, I routinely see stories about mass arrests of people involved in child sex trafficking and pedophile. A lot of these arrests take place at the state, not the federal, level, but I can’t help feeling that the apparent acceleration in arrests comes from the top — that is, it’s a priority for Trump, so it’s a priority for the FBI, so it’s a priority for state investigators. And just as Dershowitz’s determination to re-open sealed Epstein documents is inconsistent with his having participated in Epstein’s perversions, I can’t help feeling that Trump’s priorities are inconsistent with any insinuations that he is himself a pedophile or someone who went along with illegal sex trafficking and pedophilia.

People are also finally beginning to realize that the real “#MeToo” movement in Hollywood isn’t sex abuse against women (although it’s bad), but pedophilia. Half a year ago, Kyle Smith wrote a powerful article on the subject, calling Hollywood a “sex-grooming gang.” Just the other day, another Disney child star went on record about the sexual abuse she suffered. Considering how many former Disney stars have gotten into substance abuse or, like Miley Cyrus, become both substance abusers (pot) and extremely weird, aggressive, and exhibitionistic about sex, one has to believe that Bella Thorne wasn’t the only victim. Someone also put together a long tweet thread with very creepy imagery coming out of Nickelodeon’s child star factory. Although that account has since been suspended from Twitter, you can still find articles about Dan Schneider, the subject of those deleted tweets.

In a world that sees the advertising and entertainment industries increasingly sexualize children, we shouldn’t be surprised that people in power want to have sex with them. It should be very interesting watching the Epstein chips fall. I’m pretty sure, though, that News-weak’s dream notwithstanding, Trump will not be a falling chip.