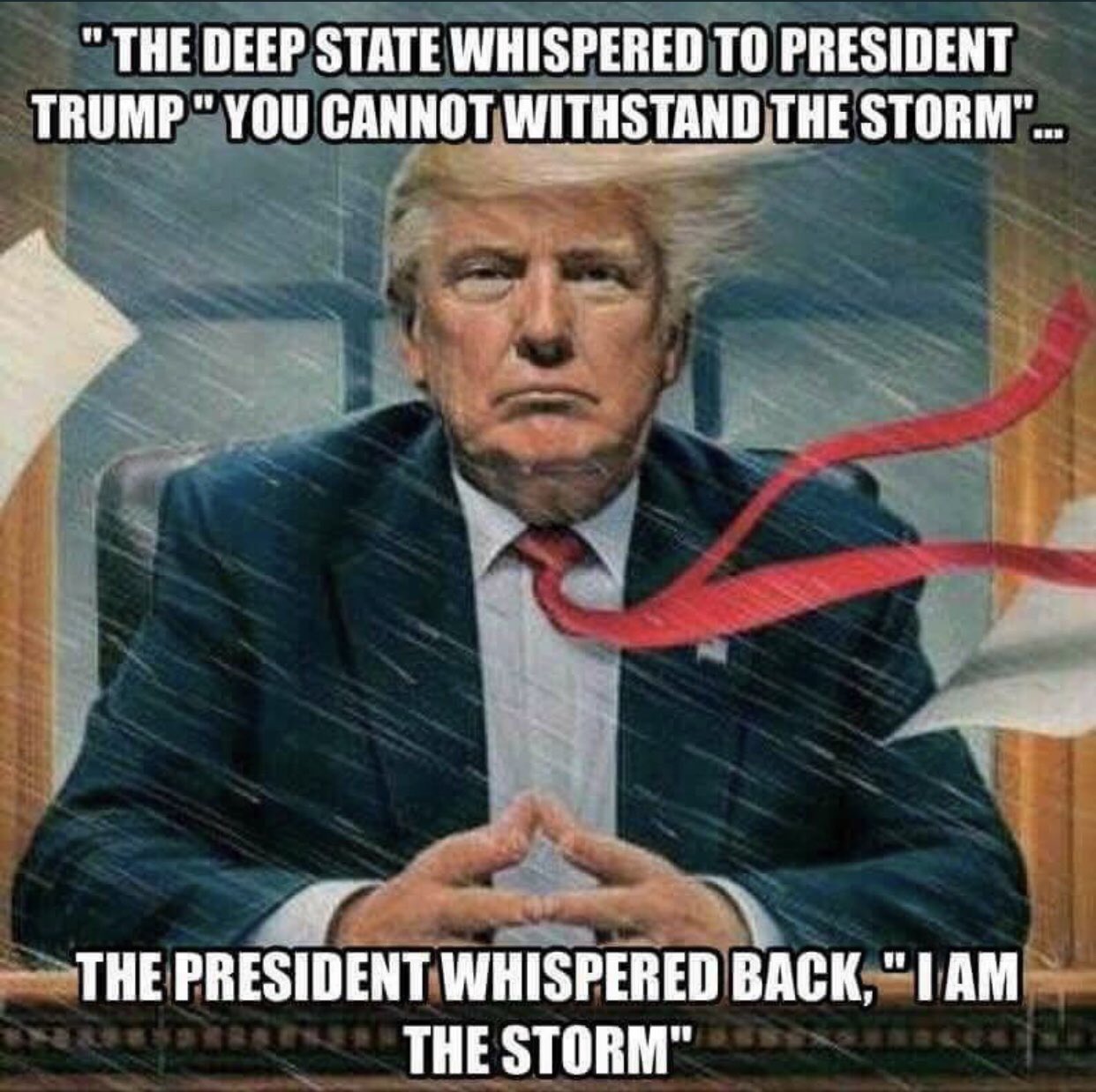 By stating the obvious about America-hating immigrants, Trump pushed the Overton window towards a more normal understanding of immigration and gratitude.

Trump started today with a bang:

So interesting to see “Progressive” Democrat Congresswomen, who originally came from countries whose governments are a complete and total catastrophe, the worst, most corrupt and inept anywhere in the world (if they even have a functioning government at all), now loudly……

….and viciously telling the people of the United States, the greatest and most powerful Nation on earth, how our government is to be run. Why don’t they go back and help fix the totally broken and crime infested places from which they came. Then come back and show us how….

….it is done. These places need your help badly, you can’t leave fast enough. I’m sure that Nancy Pelosi would be very happy to quickly work out free travel arrangements!

The reaction from the Progressive and Democrat cohort, encompassing politicians, presidential candidates, and the media, was predictable: RACIST!!! It did not matter that Trump said nothing about race. There was a dog whistle there and, naturally enough, race-obsessed Leftists heard it.

(Before I go on, a brief moment of ironic laughter here. When Occasional Cortex accused Nancy Pelosi of racism, Rep. William Lacy Clay (D-Mo), a member of both the Black and Progressive Congressional caucuses opined, “What a weak argument. Because you can’t get your way and because you’re getting pushback you resort to using the race card? Unbelievable. Unbelievable to me.” Likewise, Maureen Dowd also piped up with “A.O.C. should consider the possibility that people who disagree with her do not disagree with her color.” Coming from people who’ve spent the last 11 years insisting that racism is the only reason anyone can disagree with their agenda, that’s pretty rich. And now back to my post….)

Equally predictably, when he was again called a racist, Trump was not cowed. Instead, he doubled-down:

So sad to see the Democrats sticking up for people who speak so badly of our Country and who, in addition, hate Israel with a true and unbridled passion. Whenever confronted, they call their adversaries, including Nancy Pelosi, “RACIST.” Their disgusting language…..

….and the many terrible things they say about the United States must not be allowed to go unchallenged. If the Democrat Party wants to continue to condone such disgraceful behavior, then we look even more forward to seeing you at the ballot box in 2020!

Two conservative writers whom I admire tremendously think Trump made a terrible mistake with today’s tweets. Ed Driscoll agrees with a RedState pundit who thinks Trump essentially own-goaled himself. Likewise, John Hinderaker, one of the first conservative pundits I followed when I crossed the political Rubicon from Democrat to conservative, argues that Trump committed “a blunder of epic proportions.” I have to differ.

What I think Trump did was to drag the Overton window back to some semblance of reality. For those unfamiliar with that expression, the Overton window is a way of describing ideas that are allowable in public discourse. For example, when Lucille Ball became pregnant during the run of I Love Lucy, the word “pregnant” was not spoken in polite society. The show used a bazillion euphemisms, but never once uttered the word pregnant. In 1950s television, smack in the middle of the Baby Boom, getting pregnant was part of the Overton window, while actually using the word “pregnant” was not.

For the past 60 years, Leftists have been pushing the Overton window steadily . . . (duh) left. From the manic colors of the LGBTQRSTUV+ rainbow, to contending that people can magically use hormones and surgery to “change” their gender, to “shouting your abortion,” Leftists are introducing entirely new (and frequently insane) ideas into the realm of acceptable public conversation.

At the same time — and this is what Trump fully understands — Leftists are closing the Overton window on ideas that were once considered perfectly normal. Think of ideas that were normal just a decade ago: using pronouns consistent with biological sex, worrying about Muslim-inspired terrorism, admiring the Founding Fathers, believing that a traditional male-female marriage is optimal for raising children, mentioning the Judeo-Christian God in public, questioning anthropogenic climate change, or being anything but mindlessly positive about a member of a “Progressive protected victim class.” Nowadays, thanks to relentless media, entertainment, political, and educational pressure, voicing those ideas creates the risk that the speaker will be shouted down, humiliated, fired, or even physically attacked.

It was not so long ago that we expected people who came to America as immigrants to (a) recognize that they were invited guests, rather than entitled squatters; and (b) not to bad mouth their new country. I know what I’m talking about, for I grew up in a world of immigrants. Not only did my parents come from another country, so did all of their friends, as well as the parents of my own friends. All of these immigrants, without exception, came here legally with some, such as my father, a Polish citizen, waiting years before they were allowed in thanks to national quotas. All of these immigrants, without exception, either had to bring money with them or have someone sponsor them so that they did not become a charge on the public.

And all of these immigrants, without exception, worked hard. Some made it financially; some, like my father, never did. But all of them recognized that their being in America was a rare privilege. Even though many missed their home country (the food, familiar customs, etc.) or, in the case of the Europeans, looked longingly at the cradle-to-grave care Europeans could afford in the 1970s thanks to America paying their defense costs, they still understood that they were lucky to have been invited into an extraordinary country. They recognized that, even though it might have been hard to leave their familiar world behind, they had made it possible for their children to have a much better life than anything they could have done in the old country. There were no exceptions to these values in my world of immigrants.

The viewpoint I’ve just described was Overton window on the subject of immigration for centuries: America is an incredible land of opportunity and, thankfully, a generous country. We Americans want to continue as we have done by inviting into our country hard workers and creative people who will be appropriately grateful for the opportunity given to themselves and their children. We recognize that new immigrants will inevitably suffer from homesickness and that they may view some of the things they left behind as more virtuous or better run than America, but we expect that, having freely volunteered to come here, they will treat their new home with love and respect. Moreover, that wasn’t just the American point of view; the immigrants came in with the same attitude.

Within the last decade or so, the Leftists changed this immigration Overton window. Pretty much ever since Obama hit the White House, Leftists have insulted America and then doubled-down on insulting America, and than increased their insults to America. Even as people from around the world have illegally stormed America’s borders, the Left has told us — and instructed these new immigrants to believe — that America is a stinking pile of poop country, filled with evil plutocrats and redneck racists. To the Left and the new immigrants they indoctrinate, America is a country to be loathed, not to be admired. Moreover, immigrants are told to believe that whether we graciously invited them in or they voluntarily broke in to our country like common criminals.

You know that and I know that this is what the Leftists have done. Moreover, the millions of Americans who aren’t as political as we are know that this is what Leftists have done. They intuitively recognize that the new Overton window is as unrelated to reality as the current gender madness, but because of the Leftist Overton window shift, they are cowed into silence. The silent, sane majority in of Americans know that they can lose their jobs, get doxed, be socially humiliated, or be subject to brutal attacks if they suggest that people who were living in dirt poor, war torn, corrupt countries were blessed to come here. It would be even worse were these silenced Americans to state the obvious conclusion: If these new immigrants cannot show gratitude for the country that took them in, but insist that it’s the most evil country in the world and that their dirt poor, war torn, corrupt homeland is better, they should stop taking up space in America and return to their natal lands.

In other words, Trump stated the obvious. And by his willingness to state the obvious, he has returned the obvious to the realm of public discourse. He has shifted the Overton window back to a more normal, common sense debate. It wasn’t a mistake of epic proportions. It was a brilliant insistence on having public debate occur in reality world, not in the Leftist’s dystopian fantasy world.

UPDATE: Re Trump referring to “‘Progressive’ Democrat Congresswomen, who originally came from countries,”…. Many have pointed out that only Ilhan Omar is actually from another country. However, by that phrasing, he reminded me — and may have reminded others — that Rashida Tlaib, when elected, celebrated, not with an American flag, but with a Palestinian flag, making one wonder which country she thinks she represents. It would be typical for Trump to use that underhanded way to get people to start looking at the national loyalties these more extreme Progressives espouse, no matter their natal land.