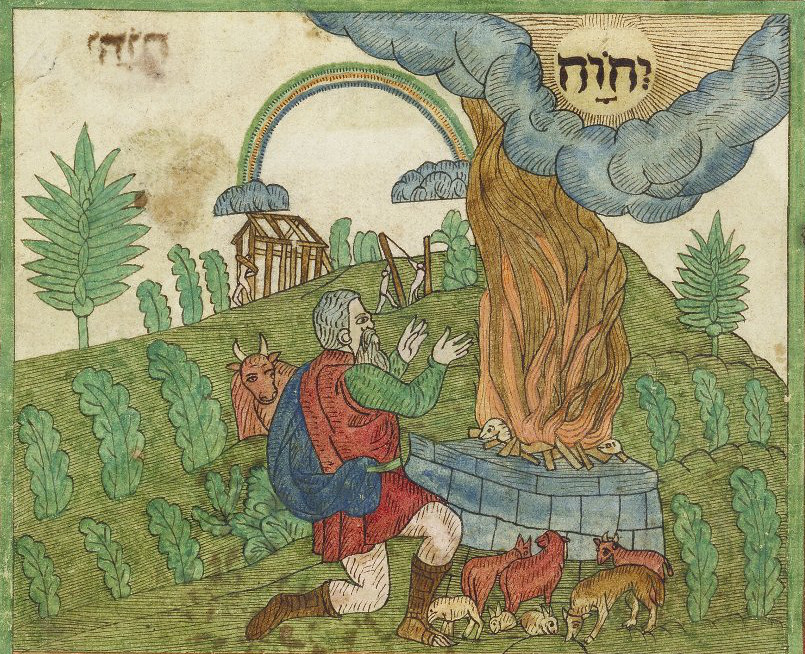 San Francisco’s ubiquitous rainbow flags, symbols of alternative sexualities, made me want to rescue the rainbow from its ghetto and return it to the world.

And I will establish my covenant with you [Noah], neither shall all flesh be cut off any more by the waters of a flood; neither shall there any more be a flood to destroy the earth.

And God said, This is the token of the covenant which I make between me and you and every living creature that is with you, for perpetual generations:

I do set my bow in the cloud, and it shall be for a token of a covenant between me and the earth.

And it shall come to pass, when I bring a cloud over the earth, that the bow shall be seen in the cloud:

And I will remember my covenant, which is between me and you and every living creature of all flesh; and the waters shall no more become a flood to destroy all flesh. (Genesis 11-15.)

In the late 1960s or early 1970s, the de Young Museum in San Francisco’s Golden Gate Park, bowing to the hippie ethos, put together a rainbow exhibition. Although I was young back then (somewhere between eight or ten at a guess) and was no stranger to museum exhibitions, for I came from an art-oriented home, this exhibition was the first I remember passionately loving. (The other two exhibitions that thrilled me in my youth were dedicated to Norman Rockwell and the Dresden art collection.)

I was reminded of that exhibition today, for a I made a rare trip to San Francisco and saw rainbow iconography wherever I looked. These rainbows didn’t give me the warm-fuzzies, though. Instead, they irked me, for they were a reminder that, in today’s world of obsessive identity politics, one group has laid claim to this universal symbol, effectively denying it to the rest of us.

A rainbow is an awe-inspiring thing, both physically and aesthetically. At the physical level, it is the wonder of light broken into its component parts, revealing to us all the colors of the universe. Some colors stand on their own and are immediately visible to us when we see the rainbow; others come about when Nature or humans skillfully blend the universe’s colors into shades that aren’t immediately obvious in the rainbow itself.

Since humans first mastered color, they’ve sought to capture the rainbow in art, whether painted or plastic (i.e., textiles, ceramics, etc.). I stumbled across a marvelous public domain review that’s collected images of rainbows in art. The early 17th century engraving of Noah, above, is one such image. Here are a few others:

Nor is rainbow iconography limited to classical art. Peter Max, the iconic 1960s pop culture artist, reveled in the colors of the rainbow, something I remember because his art featured prominently in that long-ago de Young exhibition. Likewise, every yarn store I know tries to capture the rainbow as a way of enticing customers to buy yarn and, indeed, some of the most beautiful, fun yarns with which to knit allow you to create a rainbow as you go.

My point is that (a) the rainbow is Nature’s and/or God’s gift to the whole world and (b) for centuries people have sought to recreate rainbows to enjoy even when there are no naturally occurring rainbows to enjoy. The rainbow is a universal image, icon, symbol, promise, covenant, phenomenon, or whatever other uplifting virtues you’d like to ascribe to it.

In the last twenty years or so, though, and with increasing ferocity in the last decade, one small group of people has laid claim to the rainbow in a way that virtually forecloses it to all other users. As we see every June, the rainbow emerges once a year in popular and commercial culture and it does so for one reason and one reason only: To celebrate the wonders of homosexuality and the various other sexualities that follow in its wake.

It’s gotten to the point that, if you display a rainbow in 2019, you’re not rejoicing in the natural beauty of this physical phenomenon, something that has fascinated humans since time immemorial. Instead, you’re making a distinct, unmistakable statement: I’m part of the LGBTQ+ spectrum or I support that spectrum.

What’s really ironic given the death grip the alternative gender and sexuality subset of culture has on the rainbow, is that, as the number of letters in the LGBTQ spectrum has grown and the variety of acknowledge genders approaches the triple digits, the gay rights movement is finding the rainbow too limiting. That’s why I stumbled across this poster on a gay friend’s Facebook page — and he wasn’t celebrating it; he was befuddled: If you’ve become such a particularized group of people that the enormity and entirety of the rainbow is no longer good enough for you, maybe you’ve gone too far.

This is not meant to be a post about gays or gay rights, although the almost mindless repetition of the word “pride” in association with sexuality invariably reminds me of Proverbs 16:18: “Pride goeth before destruction, and an haughty spirit before a fall.” While the authors of the Bible may not have been sufficiently “woke” for today’s Progressives, the Bible nevertheless collects hundreds, perhaps thousands, of years of hard-earned wisdom about human nature. A little humility, rather than a surfeit of pride, might serve the gay rights movement better, but whatever….

I’m tempted to include a picture of a rainbow in every post I do from here on out, along with the notation that “I’m not lesbian. I think rainbows belong to all of us.” I suspect, though, that doing so would be tantamount to a hate group and that the “tolerant Left” would do its best to hound my blog out of existence.