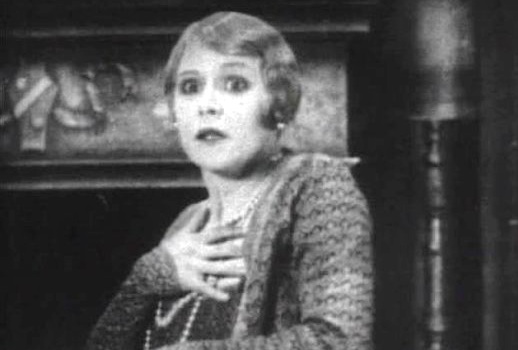 Democrats who gave Obama a pass are shocked by Trump’s vulgarity — but Trump, vulgar or not, will go down as one of America’s greatest presidents. 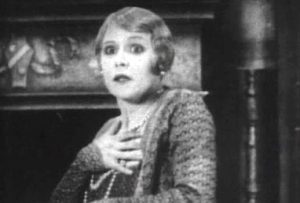 (This is a companion post to the No. 23 Bookworm Podcast which I uploaded yesterday. The content is mostly the same, although not identical. It won’t matter much whether you prefer to read or listen.)

As you all know by now, Trump had a rip-roaring rally in Minneapolis. The attendees adored it, despite Mayor Jacob Frey’s efforts to block it by charging grossly inflated security fees and then by removing Porta-Potties and messing with temperature controls. Apropos that inflated security fee, and given the ugly mob scene the Left presented outside the venue, I’m reminded of this wonderful Iowahawk tweet: 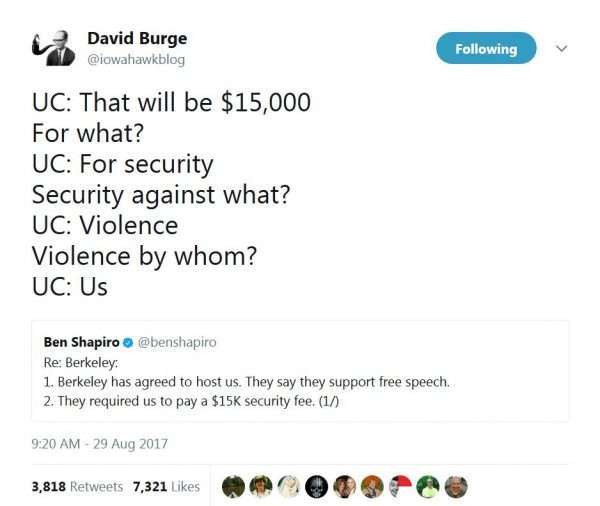 One other thought that just occurred to me about the unpleasant and unseemly riots outside the venue: In 1968, when Democrats rioted outside the Chicago convention center, the mainstream media — indeed, back in the day, the only media — fully covered Democrat behavior. Fast-forward to 2019 and the mainstream media — i.e., the Democrat Party’s official media outlet — has ignored, downplayed, or lied about the riots. But back to my main point.

Despite all the ruckus and inconvenience, the people who came to listen to Trump were having a wonderful time. Trump was in fine fettle, hurling (deserved) insults at his political opponents. Despite his bank account, he was a working class guy, fed up with an unfair system, speaking to his people. This was all too much for the pearl clutchers at CNN (if the video doesn’t show up, you can see it here):

You can see that Brooke Baldwin is practically in tears as she recounts how mean and vulgar Donald Trump is. Funnily enough, I don’t remember Brooke Baldwin, or anyone else at CNN or in the mainstream media at large, being as upset when Obama was vulgar or abusive. I’ve assembled a few examples of Obama’s greatest hits when it comes to vulgarity and meanness, all of which played to media awe or applause, and all of which were deemed appropriate for the children.

One of the things that most shocked the media’s delicate flowers was Trump’s use of the word “ass” in connection with his claim that Biden’s greatest ability as Veep was Obama ass-kissing. However, at least one talking head at CNN sounded awed when Obama used the same word in connection with 2012’s Gulf oil spill. This video is a two-fer, because of Obama’s nastiness about “talking heads” (and he wasn’t referring to mindless media chatterers). Back then, the media rushed to assure us that Obama was just the latest in a long line of presidential vulgarians.

And how about that time in 2012 when the President of the United States made a vulgar toilet joke on a nationally broadcast show?

There was the wonderful moment in 2010 when Obama, eschewing such polite terms as “opponents” or “other party” or “people whose policies will hurt you,” instead flung caution to the winds and referred to Republicans as “enemies.” Up until Obama, that wasn’t a part of American presidential discourse. Also, as an added bonus, note his carefully P.C. pronunciation of the word “Latino.” He’s so woke:

Here’s Obama in 2009, admitting he doesn’t know the facts behind Henry Louis Gates’ arrest, but assuring the world that the police acted stupidly:

Obama is also really opposed to having his political opponents speak. Back in 2009, he made it clear that they should just shut up:

And who can forget how, in 2008, Obama used cheap, condescending pop psychology to tar his opponents as fearful, Bible crazed, gun-toting haters:

Before I get to my main point, I just have one addition for Brooke Baldwin’s hysteria about children exposed to Donald Trump’s language. Do you remember this video from a view years back trashing Trump in the 2016 election? Let’s just say it’s not safe for work:

As you listened to Obama’s foul and abusive language did you notice something interesting? I did. Obama punches down. Trump only uses this kind of tactic to deal with people who have attacked him directly and, almost invariably, it’s aimed at people in the political, media, or entertainment world who have a very high status. Or before he became president, he used vulgar language to attack policies offensive to the American people). Trump doesn’t bully the little people. Obama did.

As for me, I’m someone who seldom swears or even uses vulgarities. I think my vocabulary is richer than that. Nor is this a product of age. I was nerdily famous in high school for my refusal to swear. Nevertheless, it’s the Left that brought us the potty-mouth culture that now horrifies CNN’s apparatchiks. Indeed, once their politicians started swearing in public, Leftists frantically worked to show that this swearing was both necessary and, indeed, proof that Leftists are smart.

Here’s PBS explaining in July that Democrats swear because . . . Trump (and do note how Obama, despite his track record of crudity and meanness is absolved of all sin):

“If we’re not helping people,” Gillibrand told an audience at a New York University forum, “we should go the f**k home.”

In the aftermath of Mr. Trump’s victory in the 2016 election, a growing number of Democrats have begun cursing in public, using language that in the past was reserved for private conversations away from voters and the media.

The trend isn’t entirely unprecedented, of course. In 2010, then-Vice President Joe Biden famously let an expletive slip during the White House signing ceremony for the Affordable Care Act. But the rise in examples of public cursing from Gillibrand, Perez, Sen. Kamala Harris, D-Calif., and other Democrats marks a sharp departure from the usual language used by politicians on the left in recent decades.

The shift seems to be a reaction, at least in part, to Trump’s crass tone as a candidate, which may have paved the way for a new age of political incorrectness. Whatever the reason, the rhetoric of Democrats in the Trump era, including that of rumored 2020 hopefuls like Gillibrand and Harris, is a break from former President Barack Obama’s professorial language and Hillary Clinton’s focus group-tested remarks, representing instead a tone that’s angrier — and perhaps more authentic.

The political atmosphere has changed since “the anomaly of Donald Trump swearing and getting away with it,” Indiana University English professor Michael Adams said.

“Swearing has been in public spaces over the past few decades,” Adams added. Until recently, “in political discourse, people thought you needed dignity, and some voters would object to profanity.”

That changed during the 2016 election, when Trump used crass and politically incorrect language to send a signal to voters that he was an outsider figure, said Jennifer Mercieca, a communications professor at Texas A&M University.

“His whole argument as a candidate was that he wasn’t corrupt, and he knew he wasn’t corrupt, because he used politically incorrect language” as one way to differentiate himself from establishment politicians who followed traditional political norms, Mercieca said.

Get it? Trump, whom they revile, nevertheless gave the Democrats permission to open the swearing floodgates.

Leftists have even done studies justifying their foul language by purporting to prove that it shows that the speaker is smarter:

People who curse are smart as f—k!

University of Rochester researchers asked 1,000 people about 400 everyday habits — ranging from singing in the shower to swearing — and found potty mouths tend to have higher IQs.

Another recent study from the UK found that swearing makes you stronger and gives you stamina during exercise.

Under that theory, Trump must be — as he himself admits and his supporters believe — a genius.

And speaking of Trump’s genius, I want to introduce you to an amazing, everyone-should-read article that Rabbi Dov Fischer wrote for the American Spectator: The Greatness of Donald Trump : You can judge him by the real “deplorables” – with enemies like his, the greatness flows naturally. The quoted material below is long, but it’s only a small part of the evidence Fischer adduces to contrast Trump to his opponents and to show what he is doing for America. I urge you to read the whole thing:

What makes Trump a man of historic greatness is that he wakes up every morning and continues doing his job with strength in the face of the worst character assassination imaginable, led by the Corrupt Journalist Corps. He still booms the economy. He still dares and stares down China on tariffs and trade. He still shows North Korea that he will not be hoodwinked as Bill Clinton and Obama were by promises devoid of results. He stares down the Iranian Ayatollahs and tightens the vise, despite their bombastic threats and tactical efforts to get the weak-kneed, yellow-livered, gutless and cowardly Europeans to beg Trump to lay off. He stares down those Europeans, insisting mercilessly that they cough up the money those cheap and lazy skinflints never before would pay to support NATO. So, unlike Obama and Arafat, no Nobel Prize for him. On Trump’s watch, Vladimir Putin no longer extends Russian hegemony into other countries. On his watch, Abu Mazen (Arafat’s henchman, Mahmoud Abbas) finally got cut off for allocating 7 percent of his annual budget — as much as $300 million, coming from monies sent by America and Europe — to support families of terrorists and to make convicted terrorists among the highest-income earners in “Palestine” under their “Pay to Slay” program.

Trump faces 24/7/365 lies, slander, and libel, and he just keeps going. He continues advancing novel approaches to solving the southern border mess that generations of Republicans, including Reagan, failed no less than did Democrats to address. With a porous border, deadly opioids have swamped us for years, brutal criminal animals like MS-13 have slithered in, and the most despicable of villains have smuggled in women and children for sex slavery. Yet, until Trump, no one took tough steps to secure the border. Then, faced with Obama judges in states of the federal appellate Ninth Circuit who routinely strike down his every lawful initiative, he has taken to filling not only two Supreme Court vacancies but also dozens of open federal appellate seats and even more federal district court benches with judges committed to the rule of law and the primacy of the Constitution.

Nothing breaks him. Not libel and not slander. Not accusations by the likes of John Brennan, who voted for communist Gus Hall to be president, that this most patriotic of Americans is a traitor. Not endless state initiatives to keep him off ballots. Not attacks on his wife, his daughter, even the public mocking of his youngest boy. He wakes up every day and does his job with determination and gusto. At press conferences with world leaders, as the Corrupt Journalist Corps strike at him with embarrassing questions while his foreign visitors look on awkwardly, he stands his ground. He does not give an inch. He hits back twice as hard as they do.

Most of us never have had a job in which the personal attacks, the daily venom, create a pervasive and severely toxic atmosphere. But some of us have. Some people in those situations are driven to suicide. Others sustain breakdowns or get so flummoxed daily that they make severe mistakes or burn out. Others are driven to resign. But Donald Trump feeds off it and responds by campaigning vigorously and energetically for reelection.

Again, I urge you to read — and share — the whole thing. It puts Trump in context, both in terms of the attacks against him and his accomplishments.