Feast of Martin of Tours, a 4th century Roman cavalry soldier and later a Catholic Bishop most famous for an act of kindness – cutting his cloak in two and giving a half to a poor man in the midst of a cold winter.  He is known today the patron saint of soldiers and winemakers and as a Saint who stood against poverty and alcoholism 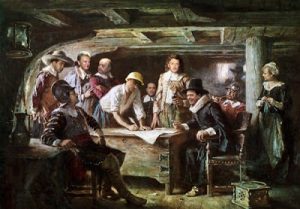 The Puritans left Britain headed for the Colony of Virginia in search of a home to freely practice their faith, but storms forced them into Cape Cod Harbor. Taking account of their dwindling provisions and the approaching winter, they decided to disembark and make a home there.  Mindful of the legalities of settling outside of Virginia, and facing the reality that they would be wholly self-governing, the leader of the expedition, William Bradford drew up a governing document for the new settlement.

On this day, the Puritan men aboard the Mayflower signed the Mayflower Compact, pledging their loyalty to the King (whom they hoped would grant them a patent to settle in this new area) and agreeing as between themselves and “in the Presence of God” to make and be bound by “such just and equal Laws, Ordinances, Acts, Constitutions, and Officers, from time to time, as shall be thought most meet and convenient for the general Good of the Colony . . .”  As author William Davis observed, “In the cabin of the Mayflower, then not only was the foundation stone of republican institutions on this continent laid, but the first New England town-meeting was held and the first elective officers chosen by the will of a majority.”

The Eastern Indian Tribes, from Canada to Florida, were largely forced to choose sides during the American Revolution.  Most of the Iroquois nation opted to ally with the British.  War as practiced by or with not just the Iroquois, but all of the Eastern Indian tribes, was inevitably brutal, but the Cherry Valley Massacre stood out for its brutality.

Cherry Valley was the sight of a small settlement with a militia fort for protection. The colonists and militia of Cherry Valley were taken by surprise when, on Nov. 11, 1778, a combined force made up of 321 Iroquois Indians, half as many Loyalists and a small detachment of British regulars attacked, slaughtering more women and children then fighting men.  As one man described the scene while tallying the dead and missing the next day:

“I was never before a spectator of such a scene of distress and horror. The first object that presented was a woman lying with her four children, two on each side of her, all scalped; the next was the wife of the Rev. Mr. Dunlop, likewise scalped, stripped quite naked, and much of her flesh devoured by the Indian dogs. But it would be tedious to mention all the shocking spectacles that were to be seen. I shall only give you the general account as I took it down:”

The massacre caused such an outcry among the colonists that George Washington ordered General Sullivan to lead an Army on a mission to lay waste to the Iroquois Nation in 1779.

1865 – Dr Mary Edwards Walker becomes the first and only woman ever awarded the U.S. Medal of Honor

Dr. Walker was a trained physician and surgeon who had volunteered to serve as a spy for the Union Army at the outbreak of the war.  Denied that opportunity, she served as a nurse, and later a surgeon.  In 1864, after crossing behind confederate lines to help treat the wounded, she was captured and imprisoned as a spy.  After several months of harsh conditions in a POW camp, she was returned to the Union Army as part of a prisoner exchange.  As stated in her citation for the Medal of Honor, Dr. Walker “devoted herself with much patriotic zeal to the sick and wounded soldiers, both in the field and hospitals, to the detriment of her own health, and has also endured hardships as a prisoner of war four months in a Southern prison while acting as contract surgeon . . .”

Perhaps the most unnecessary and costly war ever fought in Europe came to an end on this day in 1918 inside a railroad car in northern France.  There, a German delegation signed an armistice agreement this day concluding the war.

The human toll of the war was unseen in history to that time, with an estimated over 60 million casualties on the two sides combined.  Germany was left decimated as France demanded punitive terms for peace, and all of Europe was left destabilized.  Socialism, communism and fascism, with their bloody police states, stepped into the breech, setting the stage for even greater carnage in the years to come, whether from police state policies of these nations to control their population, or from the Second War War which Germany would start twenty-one years later.

1831 – Nat Turner is hanged in Virginia for inciting a violent slave revolt.

1864 – General William Tecumseh Sherman, commander of a Union Army, burns Atlanta to the ground in preparation for his march to the sea.

1911 – Many cities in the Midwestern United States break their record highs and lows on the same day as a strong cold front rolls through. 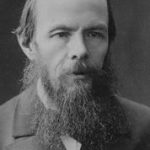 2004 – The PLO announced the death of Yasser Arafat from unidentified causes.  He was a man with much innocent blood on his hands.