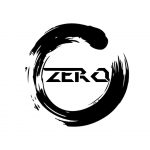 Eight months after America entered WWI following Japan’s attack on Pearl Harbor, America went on the offensive in the Pacific.  The Japanese had built air and naval bases in the Solomon Islands.  In August, America, successfully launched the Guadalcanal Campaign to capture those bases, the most important being an airfield at Tulaga.

Japan sent a naval flotilla transporting a division of soldiers to retake the airfield.  Initial combat happened on the 12th of Nov., when Japanese planes staging out of New Britian attacked America’s nearby naval task force.  Then at 1:25 a.m., in near total darkness, the Japanese and American fleets made contact near Guadalcanal.  The engagement was short and furious, fought at close range by naval cannon and torpedo.  Both sides took significant damage, the American side more so, but after 40 minutes of sustained combat, the Japanese fleet retreated, likely in anticipation of the coming dawn, when the U.S. would be able to attack from the air with its planes staged at Tulaga.  Air combat and a second surface battle on 14-15 November concluded the battle, a decisive American victory that marked a tipping point in the war with Japan.

The Japanese made no further effort to retake Tulaga.  From that point on, were fighting on the defensive against a relentless island hopping strategy that would end three years later at Japan itself.

Before there was WKRP in Cincinnati’s epic Great Turkey Massacre (“Oh, the humanity!”), there was the Oregon Highway Division’s  attempt on this day to get rid of the rotting carcass of a roughly 50-ton Sperm whale with dynamite.  The result was . . . not as expected.

Before the 2001 “9-11” attack, there was an earlier attack on the Twin Tower by Islamic terrorists, the 1993 World Trade Center bombing.  Financed by Khalid Shaikh Mohammed, the man who would later mastermind the 9-11 attacks, a small group of Islamic terrorists led by Ramzi Yousef planned to detonate over a thousand pounds of explosives in the garage underneath North Tower. The detonation on Feb. 26, 1993 killed 6 and injured over 1,000 people, but did not bring down the North Tower, perhaps only because the explosives detonated too far away from the tower’s concrete foundation.

Yousef had entered the U.S. in 1992 with an Iraqi passport.   Stopped by immigration, they found Yousef to be carrying bomb manuals, videotapes of suicide car bombers, and a cheat sheet on how to lie to U.S. immigration inspectors in his luggage.  For that, in a display of utter incompetence, INS detained him for 72 hours, then released him because of a lack of holding cells.  Further, Yousef was granted a reprieve after he requested political asylum in the U.S..  Yousef used his time in America to conspire with his fellow terrorists and gather the materials for the bomb he intended for the Twin Towers.  Yousef was motivated by the usual Jihadi justifications . . . U.S. support for Israel, U.S. support for non-Islamist regimes in the Middle East, yadda, yadda.  After the bombing, Yousef made his way to Pakistan and took part in other terrorist conspiracies, including plots to kill Pope John Paul II and Pakistan’s then President, Benazir Bhutto.

Yousef was arrested in Pakistan and extradited to the U.S.  On this date in 1997, in a trial in the Southern District Court of New York, Yousef was found guilty for his role in the World Trade Center Bombing.  Subsuquently, the Judge sentenced Yousef to life plus 240 years in prison and recommended that Yousef’s entire sentence be served in solitary confinement. 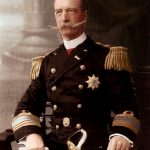 1912 – King George I of Greece makes a triumphal entry into Thessaloniki after its liberation from 482 years of Muslim Ottoman rule.

1927 – Joseph Stalin engineered the expulsion of his rival, Leon Trotsky, from the Soviet Communist Party, leaving Stalin in undisputed control of the Soviet Union. 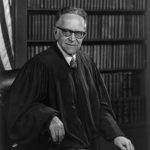 1908 – Harry Blackmun, was a progressive jurist appointed to the Supreme Court by Richard Nixon.  He will forever be remembered for authoring the horrendous opinion in Roe v. Wade, discovering a right to abortion hiding deep in the penumbras of the Constitution.

1934 – Charles Manson, Hippie cult leader who conspired in nine murders and who, in the end, died with far less blood on his hands than Harry Blackmun. 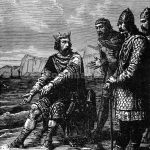 1035 – Cnut the Great, was a Danish King who conquered England.  A Christian King, he is best remembered for reprimanding the fawning members of his Royal Court by wading a few feet into the sea and commanding the tides to recede.  Instead, the tides rose, proving, Cnut told his followers, that the power of any King — no matter how high and mighty — was limited.  Only God is omnipotent and had command of nature.

1595 – John Hawkins, an English trader and sea captain, he was a key figure in the development of England’s Navy.  Named Treasurer of the Royal Navy by Queen Elizabeth, Hawkins reformed the Navy and built new war ships on a revolutionary design that made them faster and more maneuverable than other ships of the era.  His efforts were vindicated in 1588, when the smaller British Navy under Admiral Drake defeated the Spanish Armada.