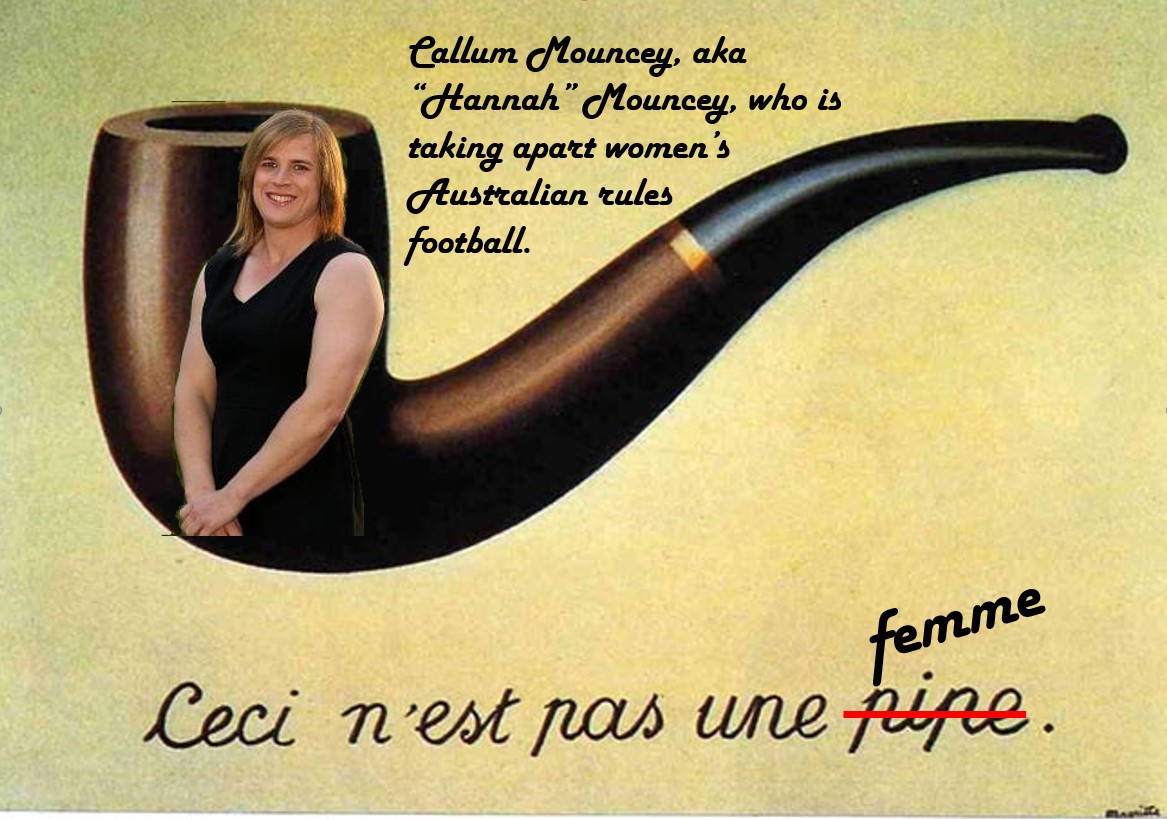 An Australian man named Callum Mouncey, who insists he’s a woman named Hannah Mouncey, perfectly encapsulates why it is so wrong to buy into transgenderism.

I have been writing for many years now about the “transgender” farce that is taking over society. (You can see my posts here, here, here, and here.) Let me say loud and clear a few things that everyone who is neither in thrall to the left nor in fear of the left knows intuitively:

— Having surgery to cut off healthy breasts, penises, and testicles does not make you a member of the opposite sex.

— Unless you’re one of the vanishingly small number of people who are genetically intersex, if you think you’re a member of the opposite sex, you are suffering from a mental illness (or, possibly, if your mother took the Pill within a short time of getting pregnant, a wash of the wrong hormones which can be offset by taking hormones consistent with your biological sex).

— Alternatively, you’re a man who makes this claim, you may also be a pervert who wants to be in bathrooms and changing rooms with naked women or, as I think is the case with Callum Mouncey, aka Hannah Mouncey, you’re a loser who couldn’t make it as a male athlete, and are pathetic enough to think you can compensate by dominating in women’s sports.

Wait! What? You don’t know who Callum Mouncey (who calls himself Hannah Mouncey) is? He’s an Australian guy who was a marginal handball player but who proclaimed himself a woman. He then bullied leftists and/or weak-minded people in the Australian sports world into letting him compete as a woman in Australian rules women’s football:

Recent viral video of Hannah Mouncey, a biological man who has become a transwoman dominating the Australian women’s handball league, reveals an athlete that towers over and seriously outweighs opponents.

The astonishing video shows Mouncey, who stands six-foot-two and weighs 220 pounds, playing against natural-born women. Mouncey is seen domineering over every opponent.

Australian trans athlete, Hannah Mouncey, has been vocal about policies in sport she says discriminate against trans women. pic.twitter.com/Q4bjVi8hAz

Mouncey has been the object of fawning media coverage on TV and in print. The Associated Press recently claimed that the only reason anyone would oppose athletes such as Mouncey is because of “resentment” that transwomen could be successful at sports.

Until 2016, Mouncey played for Australia’s men’s handball league, but now, after transitioning to a woman, Mouncey joined the women’s league.

Mouncey was barred from entering the women’s league in 2017 because of higher testosterone levels and weight but was allowed to play for the 2018 season. During that time, Mouncey complained that weight was unfair criteria for transgendered women.

“My biggest concern is the fact that weight is being used as one of the key physical measures for possible exclusion. Forget the fact that in a game that has such an emphasis on endurance and speed, being heavy is not necessarily an advantage and think about the message it sends to women and girls about their bodies: if you’re too big, you can’t play. That is incredibly dangerous and backward,” Mouncey wrote in the Guardian.

The Western world has spiraled into deathly decadence if it lets this kind of lunacy continue. People make choices and they need to abide by the consequences of those choices.

One of the things I’ve always appreciated about America’s Orthodox Jews is that, while they live by very stringent religious dictates, they do not demand that the world conform to them. They’ve made their choices and, provided that America leaves them alone, they leave America alone. That’s why you don’t read stories about Orthodox Jews suing Abercrombie, a store that lives by selling sex and sleaze, demanding that Orthodox women be allowed to work there dressed in completely body-covering clothing and wigs. Muslims, however, sue to force private businesses to bend to their will. Take this, for example, and I don’t care that even Justice Scalia found it a no-brainer. It may be legally right, but it’s culturally wrong:

The Supreme Court on Monday revived an employment discrimination lawsuit against Abercrombie & Fitch, which had refused to hire a Muslim woman because she wore a head scarf. The company said the scarf clashed with its dress code, which called for a “classic East Coast collegiate style.”

“This is really easy,” Justice Antonin Scalia said in announcing the decision from the bench.

The company, he said, at least suspected that the applicant, Samantha Elauf, wore the head scarf for religious reasons. The company’s decision not to hire her, Justice Scalia said, was motivated by a desire to avoid accommodating her religious practice. That was enough, he concluded, to allow her to sue under a federal employment discrimination law.

The vote was 8 to 1, with Justice Clarence Thomas dissenting.

So, sure, it’s constitutional to force a business to cave to someone’s religious demands, but it’s also an act of bullying by a minority belief system. I feel the same way about these so-called transgender people. If they want to pretend to be the opposite sex, fine. I won’t stop them. But I strongly disagree with their insistence that the entire world allow itself to be shaped around their delusions.

Had Hannah Mouncey just wanted to wear a dress and be addressed as “Miss” at the grocery store, I would have shrugged in a libertarian way. However, the fact that Callum Mouncey wants to destroy women’s sports and ogle naked women in restrooms and changing areas is a very big “NOOOOOOOO” for me.

In honor of Mouncey’s attempt to foist his delusion on the world, I made up a little poster, playing on Magritte’s famous observation that a drawing of a pipe is, in fact, not a pipe. Mouncey, whether or not he still has his male piping, is not a woman: 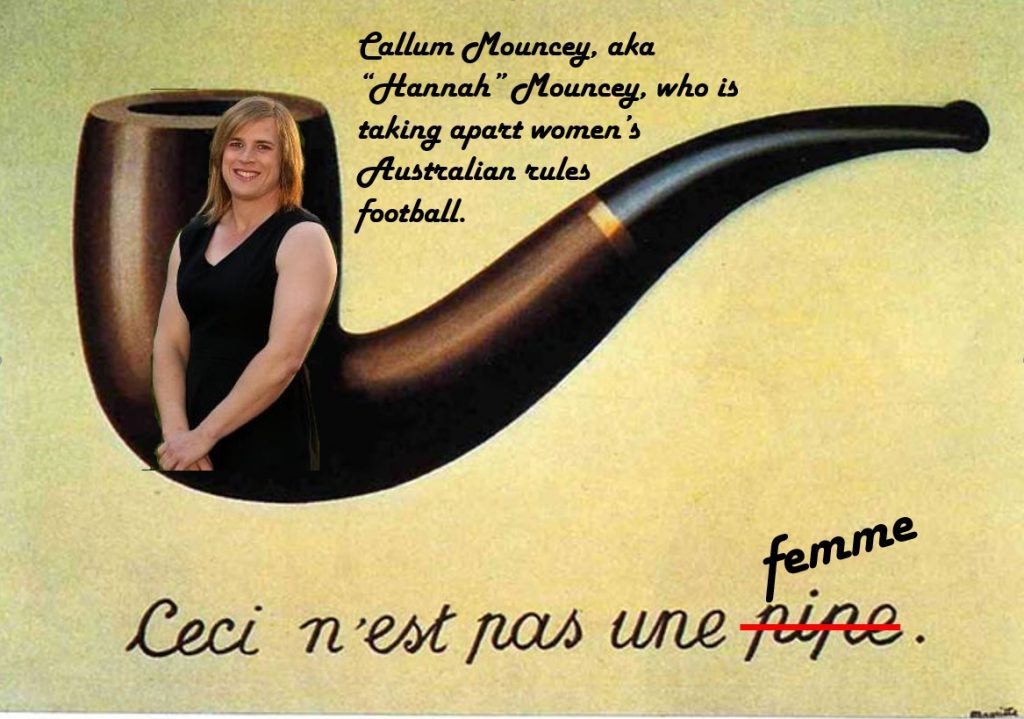