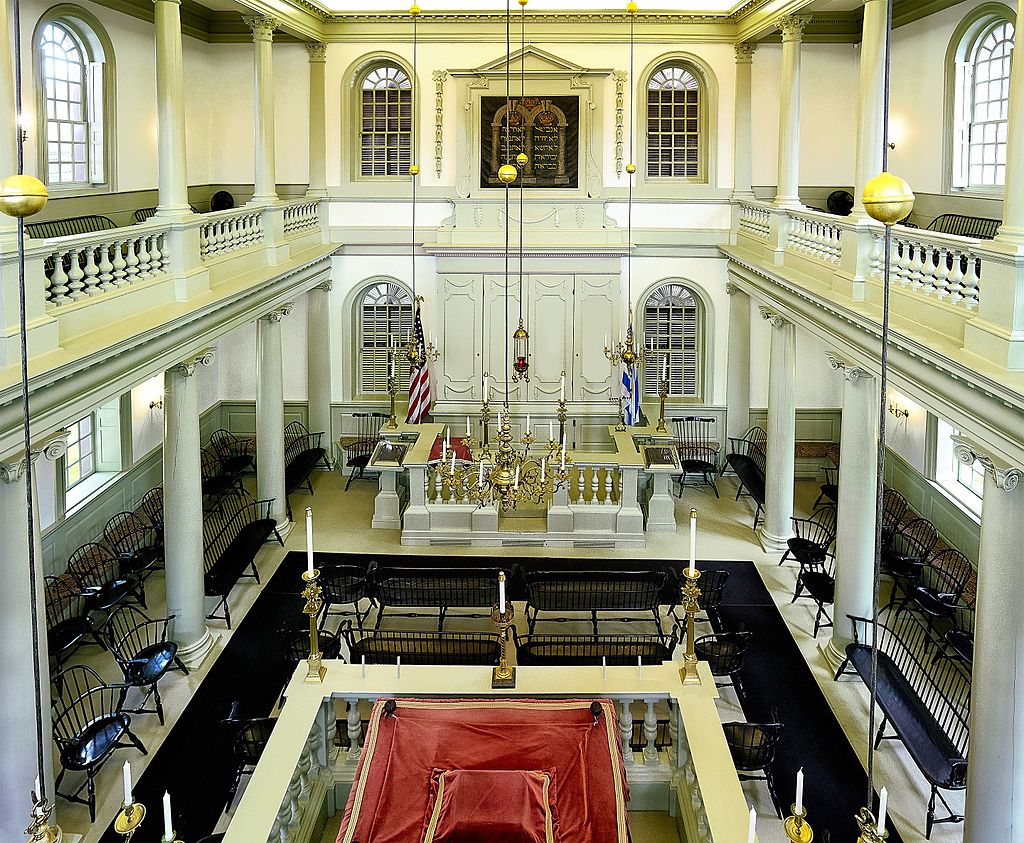 The Feast of St. Bibiana, a virgin martyr of the early Roman Church.  Legend has it that According to this legend, Bibiana was the daughter of a former prefect, Flavianus, who was banished by Julian the Apostate. Dafrosa, the wife of Flavianus, and his two daughters, Demetria and Bibiana, were also persecuted by Julian. Dafrosa and Demetria died a natural death and were buried by Bibiana in their own house; but Bibiana was scourged to death. Two days after her death a priest named John buried Bibiana near her mother and sister in her home, the house. A church in Rome, Santa Bibiana, was built over the house in the 3rd century and exists to this day.

1763 – Dedication of the Touro Synagogue, in Newport, Rhode Island.

The Touro Synagogue was, by a matter of weeks, the first synagogue in colonial America (the second being at the home of the largest Jewish population in the colonies, Charleston, SC).   Colonial America, and then early America, were among the few places that welcomed Jews with open arms.  No one made that more plain then George Washington who, on his 1790 tour of the colonies to lobby for the passage of the Bill of Rights, exchanged letters with the congregation of the Touro Synagogue.  After receiving a laudatory letter on August 17, 1790 from the synagogue’s warden, Moses Seixas, Washington responded with a now famous full throated embrace of religious tolerance:

While I received with much satisfaction your address replete with expressions of esteem, I rejoice in the opportunity of assuring you that I shall always retain grateful remembrance of the cordial welcome I experienced on my visit to Newport from all classes of citizens.

The reflection on the days of difficulty and danger which are past is rendered the more sweet from a consciousness that they are succeeded by days of uncommon prosperity and security.

If we have wisdom to make the best use of the advantages with which we are now favored, we cannot fail, under the just administration of a good government, to become a great and happy people.

The citizens of the United States of America have a right to applaud themselves for having given to mankind examples of an enlarged and liberal policy—a policy worthy of imitation. All possess alike liberty of conscience and immunities of citizenship.

It is now no more that toleration is spoken of as if it were the indulgence of one class of people that another enjoyed the exercise of their inherent natural rights, for, happily, the Government of the United States, which gives to bigotry no sanction, to persecution no assistance, requires only that they who live under its protection should demean themselves as good citizens in giving it on all occasions their effectual support.

It would be inconsistent with the frankness of my character not to avow that I am pleased with your favorable opinion of my administration and fervent wishes for my felicity.

May the children of the stock of Abraham who dwell in this land continue to merit and enjoy the good will of the other inhabitants—while every one shall sit in safety under his own vine and fig tree and there shall be none to make him afraid.

May the father of all mercies scatter light, and not darkness, upon our paths, and make us all in our several vocations useful here, and in His own due time and way everlastingly happy.

1767 – Letters From A Farmer in Pennsylvania

In 1767, Britain’s Parliament began passing a series of laws known collectively as the Townshend Acts.  These acts raised taxes on the colonists, removed the colonists power of the purse over Royal Governors, made the already draconian Navigation Acts even more crushing, punished New York for resisting to pay for British troops stationed there as required by the Quartering Act, and established the precedent that Parliament could pass tax and revenue laws that bound the colonies.  The opposition to the Townshend Acts was led by an anonymous pamphleteer — virtually all political criticisms of the time were written under an assumed identity — who signed his twelve essays “A Farmer in Pennsylvania.” The essays were published over a period of weeks in colonial newspapers beginning on this day,

The author of the essays was a lawyer, not a farmer, and would become one of America’s Founding Fathers, John Dickinson.  In the essays, he maintained a conciliatory tone towards Great Britain, but clearly stated the objections to these acts, first and foremost of which is that it violated the rights of Englishmen not to be taxed but by the consent of their representatives.  The essays galvanized colonial opposition to the Townshend Acts.  The colonists petitioned the King to withdraw the Acts and the colonists instituted a partially successful boycott of British goods.  The most violent incidents flowing from opposition to the Townshend Acts came in Boston, where unrest in 1770 led to the murder of Christopher Seider and then the Boston Massacre.  On the day of the Massacre, most of the Townshend Acts were repealed by Britain’s Parliament but for the tax on tea.

The road from extreme happiness with Britain and pride in being a British citizen, at its zenith in the colonies in 1763 at the end of the French & Indian War, to rebellion and revolution 12 years later is stunning.  Virtually every step Britain took after 1763 was counterproductive.  The Townshend Acts were one of the big steps.

1804 – Napoleon Crowns Himself Emperor of France

At Notre Dame Cathedral in Paris, the Italian native of Corsica, Napoleon Bonaparte, crowned himself Emperor of the French on this day.  His rise and reign was one of the most consequential in history, not just for France but for most of Europe — and America as well.  His reforms of the law, of administration, and of the military revolutionized Europe:

Napoleon implemented a wide array of liberal reforms in France and across Continental Europe, especially in Italy and Germany, as summarized by British historian Andrew Roberts:

“The ideas that underpin our modern world—meritocracy, equality before the law, property rights, religious toleration, modern secular education, sound finances, and so on—were championed, consolidated, codified and geographically extended by Napoleon. To them he added a rational and efficient local administration, an end to rural banditry, the encouragement of science and the arts, the abolition of feudalism and the greatest codification of laws since the fall of the Roman Empire.“

Napoleon directly overthrew remnants of feudalism in much of western Continental Europe. He liberalized property laws, ended seigneurial dues, abolished the guild of merchants and craftsmen to facilitate entrepreneurship, legalized divorce, closed the Jewish ghettos and made Jews equal to everyone else. The Inquisition ended as did the Holy Roman Empire. The power of church courts and religious authority was sharply reduced and equality under the law was proclaimed for all men.

And Napoleon was equally a successful innovator in war.  War went from the small scale armies and battlefields like the American Revolution to grand attacks on a broad front, with emphasis on artillery and cavalry.  For almost two decades, Napoleon defeated every nation he faced in battle, until he vastly overextended his supply lines in Russia, and, on the continent of Europe, his foes learned how to copy his tactics and use them against him.

Lastly, as to America, Napoleon, seeking to bolster his treasury in 1804, agreed to sell the territory of Louisiana for 15 million dollars during the presidency of Thomas Jefferson. That territory almost doubled the size of the United States.

1766 – The Law on the Freedom of Printing abolishes censorship in Sweden and guarantees freedom of the press, making Sweden the first country of the world to introduce constitutional protection of press freedom, and to pass wide-ranging freedom of information legislation.  Fast forward to today, where we in the U.S. are testing whether democracy is under greater threat from fake news churned out by a wholly biased press corps.

1805 – War of the Third Coalition: Napoleon decisively defeated a joint Russo-Austrian force on this day in the Battle of Austerlitz, driving Austria out of the war and leading to the collapse of the Holy Roman Empire.

1823 – In his annual State of the Union message to Congress, President James Monroe announced the Monroe Doctrine, that the U.S. would remain neutral in future European conflicts, and warns European powers not to attempt to colonize in North, Central or South America.

1859 – John Brown, a militant abolitionist, is hanged for his October 16 raid on Harpers Ferry, West Virginia where he was attempting to lead slaves in an armed insurrection.

1927 – Following 19 years of Ford Model T production (“Any customer can have a car painted any color that he wants so long as it is black”), the Ford Motor Company unveils the Ford Model A as its new automobile, with a 40 horse power enginene capable of hitting a top speed of 65 m.p.h.

1950 – Korean War:  UN forces, reeling from the massive entry of the Chinese into the war, tried to stop the Chinese offensive by making a stand at the southern most part of North Korea.  The Chinese won the Battle of the Ch’ongch’on, driving UN forces completely from North Korean territory.

1863 – Charles Edward Ringling, co-founder of the Ringling Brothers Circus that was, for many years, until it went out of business in 2017, “the greatest show on earth.”

1814 – Marquis de Sade, the original sadist of legend, died this day.  The story is told that one day, he was stalked by the world’s most well known masochist, Leopold Ritter von Sacher-Masoch, who begged de Sade to beat him and whip him to de Sade’s hearts content.  De Sade told him simply, “No.”

The Holly and the Ivy is an 18th century tradition English carol:

Christmas in Dixie, Alabama’s lead track from their 1985 Christmas album:

And for a longer offering, here is Doc Severinsen and the Tonight Show Band: