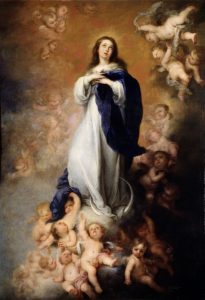 The Feast of the Immaculate Conception is held on this day to celebrate the belief in the Immaculate Conception of the Virgin Mary — i.e., that from the moment of her birth, Mary, the chosen of God to bear Jesus, was herself born without sin. “The feast was first solemnized as a Holy Day of Obligation [in] . . . 1708 under the Papal Bull Commissi Nobis Divinitus by Pope Clement XI and is often celebrated with Mass, parades, fireworks, processions, ethnic foods, and cultural festivities in honor of the Blessed Virgin Mary and is generally considered a Family Day, especially in many majority Catholic countries.” 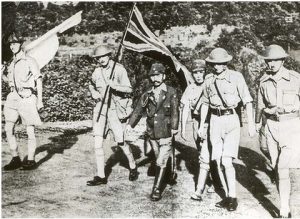 Japan, a nation historically as militaristic as Ancient Sparta, had followed a policy of seclusion until forced to open the nation to trade in 1854. Japan, despite being a nation with few natural resources, none the less quickly industrialized and became a world power. It’s first effort to secure external natural resources came when it invaded Korea in 1894, beginning a brutal 51 year occupation that led to the first Sino-Japanese War (1894-95), a war which itself set off a domino effect that culminated in Japan’s victory over Russia in the Russo-Japanese War (1904-05). Japan significantly expanded its colonial control of territories in Korea, China, and Taiwan, but likewise increased its need for resources to maintain and build its military.

Japan’s next expansion came during WWI, which it entered on the side of the Allies in order to justify invasions of German colonies and holdings in the Pacific. Japan gained Tsingtao fortress in China as well as, German-leased territories in China’s Shandong Province, and the Marianas, Caroline, and Marshall Islands in the Pacific, which were part of German New Guinea.

In between wars, during the Depression, military leaders came to increasingly dominate the Japanese government. They pushed military adventurism in the 1930’s culminating in the Second Sino-Japanese War in 1937 involving a full scale invasion of China. The effect was two-fold. One, the supplier of 90% of the oil used by Japan, the United States, became deeply concerned with Japanese expansion and began to impose sanctions. Two, Japan’s war in China caused a significant need for more natural resources generally to keep its war effort going.

At that point, the Japanese military began eyeing a strategy of driving all of the Western powers – the U.S., the U.K, and the Netherlands — out of the Pacific and replacing them with Japanese rule. Moreover, Japan needed to control a significant source of oil, and that meant taking control of the Dutch East Indies, today known as Indonesia. Japan’s WWII strategy, developed by Osami Nagano and Isoroku Yamamoto. became fixed on securing the major sources of natural resources in South East Asia and defending these by creating a series of heavily defended Pacific Islands on the perimeter. The decision to fully implement the strategy came when the United States cut off oil exports to Japan over their wars of aggression on August 1, 1941. At that time, they had a two year reserve of oil.

The only real threat to Japanese plans came from the United States. Thus Japan hoped to knock out the U.S. Pacific Fleet at Honolulu and buy itself enough time to compete its planned Pacific conquests. They believed that the U.S. would not be willing to assault Japanese forces once Japan had fortified its defensive positions on the perimeter islands.

Thus, on this day in 1941, which, given the time zones involved was near simultaneous with the attack on Pearl Harbor, Japan launched attacks on the U.S.-held Philippines, Guam and Wake Island and on the British Empire in Malaya, Singapore, and Hong Kong. Interestingly, while the Dutch East Indies was the prime target, Japan did not begin its invasion there until days later. The Japanese did not want the East Indies government to destroy oil wells before Japan was fully prepared to conduct a lightening invasion of the islands.

1991 – The leaders of Russia, Belarus and Ukraine sign an agreement dissolving the Soviet Union

“Winston Churchill made repeated claims about the imminent fall of the Soviet Union throughout his political career. In January 1920, he denounced Bolshevism as a “rule of men who in their insane vanity and conceit believe they are entitled to give a government to a people which the people loathe and detest… The attempt to carry into practice those wild theories can only be attended with universal confusion, corruption, disorder and civil war.”

Churchill was rarely wrong in his assessments, but he was as to the Soviet Union, at least during his lifetime. He did not contend with the terrorism that leaders like Stalin were willing to visit upon their own people, nor the willingness of a people with a history of “oriental despotism” and not the Magna Carta to tolerate such a regime.

The Soviet Union came about when a tiny minority of the Russian population that identified as Bolsheviks seized power in 1917, after Russia was devastated in WWI. Vladimir Illicyh Lenin, the leader of the Bolshevik movement imposed on the country both a police state and the theoretical and unrealistic communist political and economic policies of Karl Marx. Lenin’s successor, Stalin, followed on these policies with a vengeance, purging millions of citizens inside the Soviet Union’s borders, all for the good of the state.

The Soviet Union became the mortal enemy of Western Civilization from 1945 until its dissolution on this date in 1991. While the Soviet Union was a first world military power, it was grafted upon a third world economy. That, in the end, is what brought it down. The one person who saw that weakness and exploited it was President Ronald Reagan. As one analyst said after the fall of the Soviet Union:

Reagan stands out in part because he believed the Soviet Union could be defeated. For most of the Cold War, Republican and Democratic administrations alike had assumed the Soviet Union would prove durable for the foreseeable future. The bipartisan policy of containment aimed to keep the Soviet Union in check while trying to avoid nuclear war; it did not seek to force the dissolution of the Soviet empire. Ronald Reagan, in contrast, believed that the Soviet economy was so weak that increased pressure could bring the Soviet Union to the brink of failure. . . .

This from a speech by President Reagan in 1982 before Britain’s Parliament:

It is the Soviet Union that runs against the tide of history by denying human freedom and human dignity to its citizens. It also is in deep economic difficulty. The rate of growth in the national product has been steadily declining since the fifties and is less than half of what it was then. The dimensions of this failure are astounding: A country which employs one-fifth of its population in agriculture is unable to feed its own people. Were it not for the private sector, the tiny private sector tolerated in Soviet agriculture, the country might be on the brink of famine . . .

Overcentralized, with little or no incentives, year after year the Soviet system pours its best resource into the making of instruments of destruction. The constant shrinkage of economic growth combined with the growth of military production is putting a heavy strain on the Soviet people. What we see here is a political structure that no longer corresponds to its economic base, a society where productive forces are hampered by political ones. …In the Communist world as well, man’s instinctive desire for freedom and self-determination surfaces again and again. To be sure, there are grim reminders of how brutally the police state attempts to snuff out this quest for self-rule – 1953 in East Germany, 1956 in Hungary, 1968 in Czechoslovakia, 1981 in Poland. But the struggle continues in Poland. . . .

What I am describing now is a plan and a hope for the long term – the march of freedom and democracy which will leave Marxism-Leninism on the ash heap of history as it has left other tyrannies which stifle the freedom and muzzle the self-expression of the people. And that’s why we must continue our efforts to strengthen NATO even as we move forward with our Zero-Option initiative in the negotiations on intermediate-range forces and our proposal for a one-third reduction in strategic ballistic missile warheads.

It is interesting to note that, while Reagan realistically saw and exploited Soviet weakness, our chief Russian analyst at the CIA, Robert Gates, believed the opposite, telling a reporter “there was no way the Soviet Union was going to break up in his lifetime or his children’s lifetime.” On this day in 1991, Reagan was vindicated. The Soviet Union dissolved. What Reagan got wrong was that “Marxism-Leninism” would be consigned to the “ash heap of history.” The reality is that it was still alive and well in Western academia where, criminally, it was and is being fed to students as a system superior to freedom and capitalism. No one could foresee that on this date in 1991.

1660 – On this day, the first woman (either Margaret Hughes or Anne Marshall) appeared on a public stage in the role of Desdemona in a production of Shakespeare’s play Othello. Prior to 1650, female roles were played by men. What changed by 1660 is that England had just lived through ten years of Cromwell’s Puritan Protectorate and the pendulum was swinging against the extreme strictures of puritanical rule.

1864 – Pope Pius IX promulgates the encyclical Quanta cura and its appendix, the Syllabus of Errors, outlining the authority of the Catholic Church and “condemned as heresy 80 propositions, many on political topics, and firmly established his pontificate in opposition to secularism, rationalism, and modernism in all its forms.”

1943 – World War II: The German 117th Jäger Division destroys the monastery of Mega Spilaio in Greece and executes 22 monks and visitors as part of reprisals that culminated a few days later with the Massacre of Kalavryta.

1980 – Former Beatle John Lennon is murdered by Mark David Chapman in front of The Dakota in New York City. 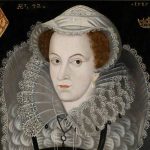 1542 – Mary, Queen of Scots, came to her throne six days after her birth. She spent her childhood being raised in France by the Royal Court. When she returned to Scotland, her involvement in a scandalous affair and possibly the murder of her husband brought her reign to an end. She lost her head many years later after being accused of involvement in a plot to assassinate Queen Elizabeth.

1884 – Francis Balfour, English colonel and Foreign Secretary of Britain most famous for the 1917 Balfour Declaration, “a public statement issued by the British government in 1917 announcing support for the establishment of a “national home for the Jewish people” in Palestine . . .” 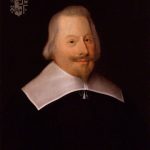 1643 – John Pym, a leader of the Parliament and a prominent Royal critic before and during the English Civil War. Charles I’s failed attempt to arrest Pym and four other members of Parliament in 1642 while the House of Commons was in session was the final trigger for the Civil War.

1978 – The Iron Lady of Israeli politics, its only female Prime Minister (1969), Golda Meir, she led Israel through both the Islamic terrorist attacks at the 72 Olympics and the Yom Kippur War.

We Wish You a Merry Christmas This version was too cute not to post. The song itself probably originated in 19th century England.

Angels Among Us is a song first recorded by Alabama in 1993.

And for extended listening, Elvis Presley