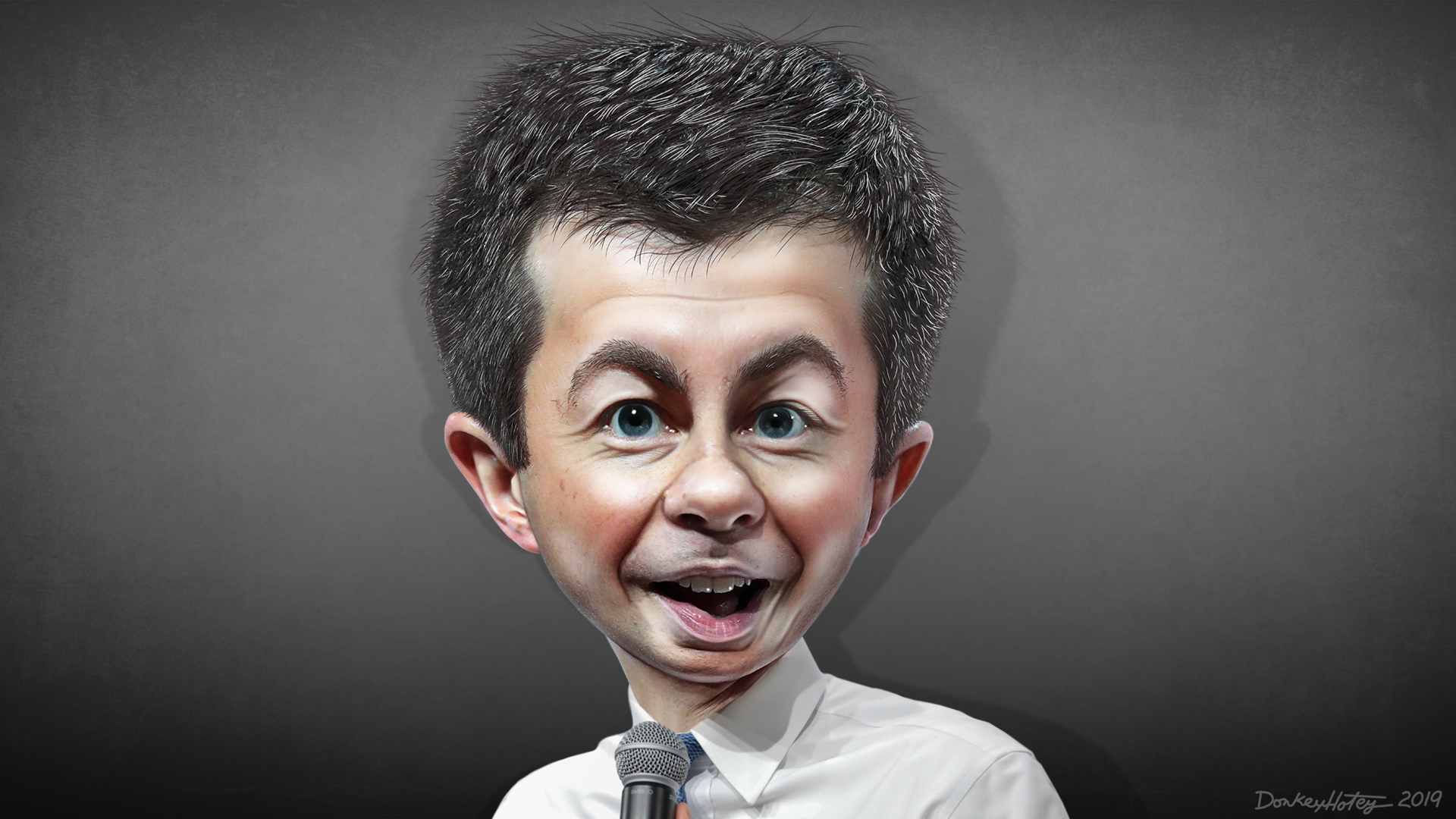 Pete Buttigieg is an intelligent man who has accomplished much in 37 years, is a doctrinaire Leftist, and is totally unqualified to be president.

When Trump first rode down the staircase in 2015 to announce his candidacy, the media considered him the biggest joke around. They gave him hundreds of hours of free air time because they thought it would be the best thing ever — for Hillary — if Trump were to become the Republican nominee. At the same time, large numbers of conservatives (myself included), where occupying “anyone but Trump” territory.

There was no doubt, of course, that Trump was a master showman and a truly charismatic speaker, something that caused Mark Steyn to realize as early as January 2015 that Trump could win.

Showmanship and charisma. They’re real and they’re matter. Moreover, Trump had then, as he continues to have, a genuine belief in America and Americans that couldn’t be faked.

But in the beginning, Trump also had something else to offer, something that most in the media ignored, but that the American voters valued; namely, Trump had vast executive experience. Paul Solotaroff, writing in September 2015 for Rolling Stone, was one of those who “got it.” In an article entitled “Taking Trump Seriously,” Solotaroff, after noting Trump’s loopy style coupled with his razor-sharp brain, pointed out something Democrat wished to forget (h/t Don Surber):

In all the hysteria, however, what’s often missed are the qualities that brought Trump here. You don’t do a fraction of what he’s done in life — dominate New York real estate for decades, build the next grand Xanadus for the super-rich on the far shores of Dubai and Istanbul, run the prime-time ratings table for more than 10 years and earn a third (or sixth) fortune at it – without being immensely cunning and deft, a top-of-the-food-chain killer.

Yeah. Trump’s good at business. Really good. Moreover, he didn’t make money the new way, by pushing or facilitating information (Bloomberg or the dot com guys), but the old fashioned way by building brick and mortar things. There’s nothing ephemeral about what Trump did, and it took a lot of knowledge, wheeling and dealing, and political acumen at home and abroad.

Sure, Trump filed for bankruptcy, but he did so (a) as a smart business decision because he was reorganizing his finances and (b) because he followed bad advice — and learned from that, vowing never to make the same mistake again (or at least to pull out before going into too deep a dive given that it’s not always clear until later whether advice is good or not).

And yes, Trump’s hurt people on the way up, but it’s pretty clear that he doesn’t want to hurt the American people, something that was much less certain with Hillary. The voters might as well have said out loud, “He’s a shark, but he’s our shark.”

Voters were very clear on the fact that, while Trump may not have had political experience, he knew politicians, he was vastly accomplished in the world of business and negotiations both at home and abroad, and he had a stunning record for getting things done. Most politicians can’t make that boast because they’re herd animals who move in little circles with their fellow beasts. Trump, who was 69 when he entered the White House, was a blazing whirlwind of accomplishments, Americanism, charm, charisma, and experience. Because president of the United States is a managerial position as much as anything else, Americans went for a successful manager.

I won’t spell out here Trump’s pre-election accomplishments (and failures) for they’re well known. I will note that it’s both refreshing and instructive to see what he’s achieved in less than three years in office despite the bogus Russian hoax and now the bogus Ukraine impeachment.

But what about Pete Buttigieg, aka, “Mayor Pete.” Should he be the Democrat presidential candidate and actually win, he will be 39, making him the youngest person ever elected president of the United States. What will he have accomplished in his 39 years before arriving at the White House? Because his CV is less well known than Trump’s was at this stage in the primary process, let me recite some of Buttigieg’s career high points:

Buttigieg was his high school’s valedictorian, chosen from a field of around 200 students.

While in high school, Buttigieg wrote an essay praising Bernie Sanders, the man who refuses to abandon communism despite more than 100 million communism-caused deaths in the 21st century. Buttigieg won a John F. Kennedy Presidential Library and Museum “Profiles in Courage” award for that essay.

As an undergraduate at Harvard, Buttigieg majored in history and literature, and was president of the Student Advisory Committee of the Harvard Institute of Politics.

Buttigieg’s bachelor’s thesis was based upon Graham Greene’s The Quiet American, an anti-American novel about the earliest years of the Vietnam War. Greene’s general attitude (also seen in The Third Man) was that Americans ranged from dangerous because of naive stupidity to dangerous because of criminal venality. He didn’t like Americans. (This is not just my bias; even Slate concedes Greene’s hostility to Americans.) The essay was also based upon the work of Perry Miller, one of the first revisionists of American history. As an aside, Margaret Atwood dedicated The Handmaid’s Tale, the book responsible for all those idiot women wandering around in cloaks and hoods since Trump’s election, to Miller.

Buttigieg received a Rhodes Scholarship in 2004. On the one hand, good for him. Its a mark of his real intelligence and his being adept at the academic game (something he probably learned from his father, a professor at Notre Dame). On the other hand, keep in mind that, consistent with John O’Sullivan’s law, the Rhodes Scholarship is increasingly a vehicle for promoting Leftist ideology.

Buttigieg went to Oxford, receiving a BA with first class honors in philosophy, politics, and economics. Again, good for him. No one can or should question Buttigieg’s academic abilities. Everyone should keep in mind that being good at school does not necessarily translate into being effective outside of school.

After leaving Harvard, Buttigieg did the following:

After leaving Oxford, Buttigieg’s days as a volunteer and minion were over and his real career began:

While mayor, Buttigieg can point to the following accomplishments:

We’re getting into minutiae now. I’ll end by saying that, if you go to Wikipedia, you can see details about the above initiatives and several others that Buttigieg led or in which he participated, all aimed at bringing in money and reorganizing the city government. The penny ante stuff mostly went through while Buttigieg struggled with larger initiatives, whether they passed or not. The pattern seemed to be that the city’s Deep State resisted re-organization and, if Buttigieg was successful in pushing through urban redevelopment, they displaced minority communities.

My sense is that Buttigieg was neither a bad mayor nor a good one. He was a decent mayor who was trying to make his city a more attractive place, with mixed success. Typical for Leftists, he was very gung-ho about combining government and private assets, and then was surprised and dismayed when the people bullied by the combined forces of government and big developers reacted badly.

For a 37-year-old, Buttigieg’s political accomplishments are decent, his military service is laudable, and his intelligence is real. He’s also a smooth and articulate speaker. I disagree strongly with his politics — for he has shown unswerving devotion to the modern, hard Left Democrat party throughout his life — but even that’s not the real issue.

The real issue is that there’s absolutely nothing in Buttigieg’s resume, whether his good grades, his 7-month military tour, his short stint in the private sector, or his average service as mayor, to indicate that he has the experience or the ability to take on the role of senior executive officer for the entire United States of America.

Boiled down to its essentials, all that Buttigieg he has to offer is being the gay version of Obama. After all, Obama had nothing to offer in terms of experience or expertise for the role he took on and, once in that role (i.e., as President) his accomplishments were dismal, to say the least. In fewer than three years, although Trump hasn’t been able to undo all the damage Obama caused, he’s been able to dismantle just about everything Obama put in place. Indeed, the only thing Trump couldn’t fully dismantle was Obamacare, and that failure was on McCain, a petty, vindictive man who put his private grievances ahead of the nation.

Democrats loved Obama’s policies so much they’ve now rank him higher than George Washington (who was a slave owner and a war monger, right?). I have to believe, however, that it was his melanin that gave him a special place in Leftist hearts. That is, Leftism alone wasn’t enough. Obama had the race factor.

In 2019, for all that the Left adores the LGBTQ etc. agenda (which it sees as a battering ram for its control over American culture), I don’t see that slavish devotion transferring to Buttigieg just because he’s gay. It’s one thing to write devotionals about Jesus Obama or the Magic Negro, given America’s long and complicated relationship with American blacks.

It’s another thing entirely to get ordinary Americans on board with the Magic Homosexual. After all, while gays have in the past been derogatorily called “fairies” (and drag queens revel in the image), I don’t think calling Buttigieg a “Magic Homosexual” has quite the same connotation as the Obama worship we saw.

It says a great deal that Buttigieg has emerged as one of the front runners in the Democrat primary race. The more senior people in the race (i.e., Warren and Sanders) are so hard Left that the same more moderate Democrats who madly embraced Obama are likely to be less enthused about embracing a little gay guy, with a mediocre record, whom African-Americans (the single most important voting block in the Democrat party) dislike.