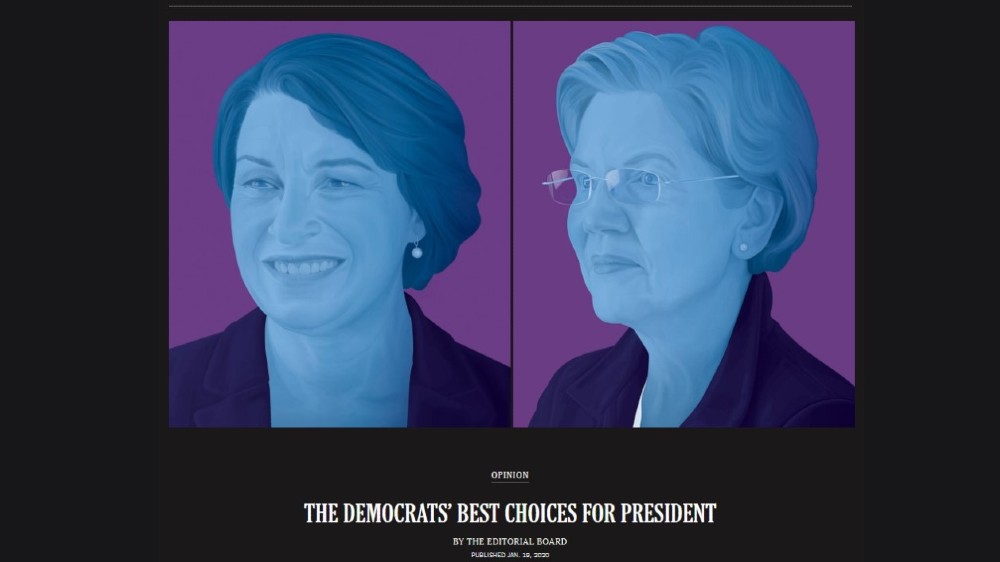 Yesterday, the New York Times came in for a good deal of both criticism and laughter when it endorsed not one but two candidates: Elizabeth Warren and Amy Klobuchar. The mere fact that it’s trying to move two candidates forward simultaneously shows a certain desperation.

And then there was the bizarre illustration that the Times used, one that turned the candidates blue in order to avoid revealing that both women are snowy white. The Times tried to disguise its obvious intent by giving the picture the look of an old-fashioned photo negative (something today’s young people have never seen): 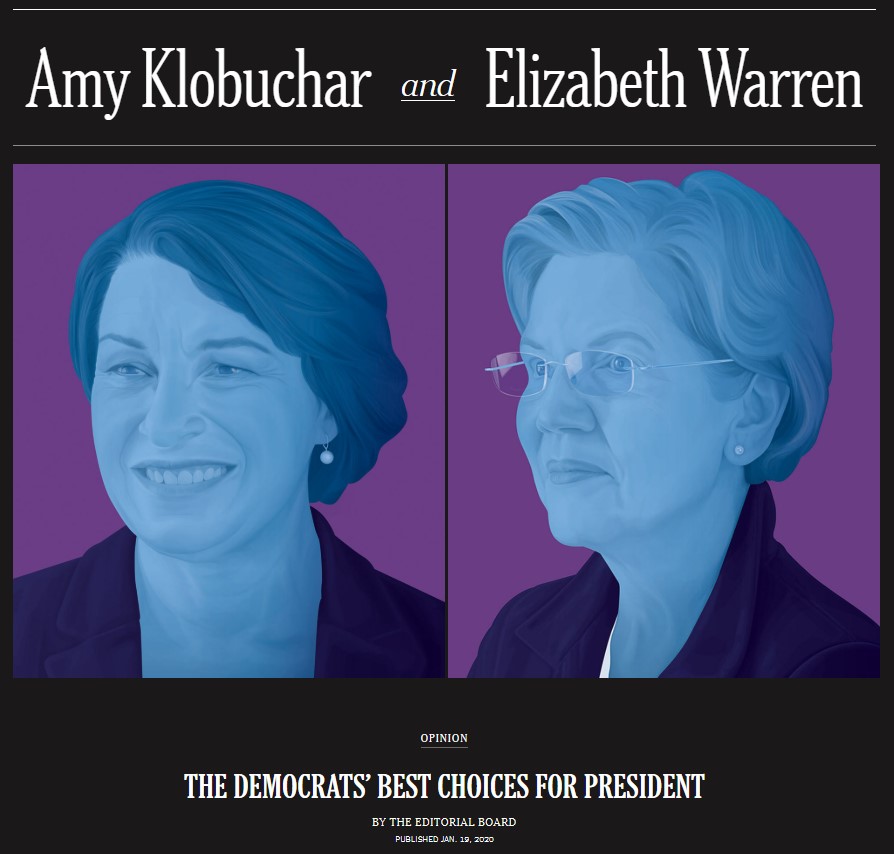 When I saw the picture, I had to laugh, because it ties in perfectly with a story about my sister. This was in the late 1950s, when she was very little, maybe three. Dad came home with a developed film roll which, in those days, included the negatives as well as the photographs.

My sister was less interested in the photos than she was in the negatives, with all their upside-down colors. Later that day, when Mom took my sister shopping, they saw a black person at the store and, for the first time, my sister had a name for people whose skin color was the opposite of hers.

“Look, Mommy,” she hollered at the top of her voice. “It’s a negative!”

I can’t help but think that one of the editors at the New York Times was present in the store that day and took inspiration from a toddler’s wonderment.

The double endorsement reveals how desperately frightened Dems are about their own party’s weaknesses. Neither Klobuchar nor Warren is a frontrunner. Indeed, according to today’s running averages poll at Real Clear Politics, Klobuchar only occasionally makes it into the top five or six, while Warren is scrambling to stay in third place:

So what’s going on? Why can’t the New York Times just go with the current leader, Joe Biden, a mainstay of Democrat party politics for decades?

The Times is grappling with the fact that it’s been burnt before. In 2016, we were all promised that Hillary was inevitable because she was a Clinton, a woman and, after that first failed run against Obama, it was her turn. Biden’s that same thing all over. He may be a man, but he’s got some of the Obama cachet and, after several failed presidential runs, it’s his turn.

The problem is that Biden has the same flaws as Hillary: He has a tin ear and he’s corrupt, something that’s going to become very obvious if Democrats insist on a full impeachment, complete with witnesses. Add to that the creepy factor of Biden’s constantly groping and snuggling up to little girls, and you can see where the establishment worries he’s a time bomb.

There’s also the problem of Joe’s chronic foot-in-mouth disease, exacerbated by something that may be incipient senile dementia. Once Biden is facing off against Trump in a debate, even black voters’ loyalty to him because of his Obama ties may not be enough to get him to the finish line.

And Sanders? The base may love this open socialist, but across America, away from the Blue coasts (plus a few dots in the Midwest, Southeast, and Pacific Ocean), people don’t like the idea of electing a man who wants to grow government. They also wonder about the moral principles (or lack of same) that allow a man to have unswerving loyalty to socialism even though he was alive during the decades in which socialism stacked up a hundred million dead bodies and billions of ruined lives. They can tell that his plans promise the worst for America. (I’ve detailed the problems here, here, here, and here.) It takes a modern college education, one heavy on Marxist indoctrination and light on knowledge and wisdom, to support Bernie.

As I’ve written before, while Buttigieg is bright, intellectually agile, and served his country, he’s also someone who’s only real political asset is that he’s gay. Take away the gay and you’re left with a white, two-term mayor of a mid-sized American city that has an outsized crime rate and a local black community that’s extremely hostile to him. This hostility has spread to blacks across America. Buttigieg’s neither a statesman nor an executive. He’s the high school class valedictorian who thinks he’s special because he’s the teachers’ pet. Americans will not think he’s special.

Some Democrats are looking to Mike Bloomberg as their savior because he sounds sane. He’s also willing to invest billions and billions in the race so that, even if he doesn’t win, Trump doesn’t either. Those Democrats who haven’t gone entirely to the socialized dark side like to point out that Bloomberg has been a fiscal conservative in the past. Except that now that he’s in the race, Bloomberg has already begun pandering. Last night, he promised to create a program giving blacks $70 billion in reparations — all to be managed out of the White House, of course.

Aside from the fiscal conservativism and his stop-and-frisk policies, for which he’s already apologized, Bloomberg is an across-the-board Leftist. He supports unlimited abortion, birth control for teenagers, open borders, amnesty, socialized medicine, and the end of the coal industry to satisfy the climate change gods. In addition, he promises to micromanage our diets and even the way in which Jews can circumcise their babies.

At the end of the day, Bloomberg’s flop-sweat neediness to win, his off-putting personality, the shameless pandering leading him away from his one decent principle (fiscal conservativism), and the stratospheric disconnection his wealth creates (promising to put coal miners out of work even as he owns more than ten houses, fleets of cars, and at least one plane) will not win over voters. Even investing billions cannot disguise that he’s an awful, charmless, arrogant, little man.

Of course, the big handicapped for Biden, Bernie, Bloomberg, and Buttigieg, aside from the crazy coincidence that the names with which they’re associated all start with “B,” is the fact that they’re white men. That’s a big no-no in today’s Democrat party. Andrew Yang is biologically not a white man, but he’s still a man and the Left keeps thinking that Asians are white because they do well in school and achieve economic success in life. So, no Yang.

The Times is therefore left with two blue women, one of whom is openly hard-Left and a liar, while the other tries to appear moderate but is, in fact, 90% Leftist. Klobuchar’s pose on the debate stage is to be the calm, principled realist, the one who’s not giving the farm away to the socialist comrades. Her policies, to the extent anyone can pin them down, however, hew Left and Lefter. Regarding trying to pin her down, though, it’s painfully clear that Klobuchar is not a leader; she’s a follower who has long been content to be a go-along-to-get-along Senator who does little other than sign group letters.

Still, Wikipedia gives us a little insight into what Klobuchar would stand for if she weren’t constantly hiding behind shrubbery. She’s for greater government surveillance, says America’s past “free society” just oppressed women, doesn’t want the census to record illegal aliens, opposes the death penalty, wants to raise teacher pay, opposed the Surge, supported Obama’s bombing Libya, supports the Iran Deal, supported Obamacare, she raised her hand for health care for illegal aliens. Klobuchar also supports abortion and her stance is a perfect example of her refusal to state her positions. Instead of saying, I support abortion, she’s one of those who says abortion is between a woman and her doctor. This ignores that there’s a larger principle involved, and turns abortion into just another item on the endless checklist of little ideas Klobuchar has.

And that’s the real problem with Klobuchar. She has no big principles. She inches along, mostly hewing Left, but having occasional moments of common sense, such as opposing free four-year college for all or trying to get Obama to attack China’s trade violations.

Klobuchar ends up reminding me of two people, one real, one fictional. When it comes to that lack of any principles and that urge to micromanage, she reminds me of Jimmy Carter. Bloomberg likes to micromanage too, but that’s because he’s a born despot. That’s not Klobuchar. Let me explain.

When Carter was president, a family friend, an engineer, told us that Carter’s problem was that, because he had no big principles, all he could do was follow the data. And whenever the data changed, his direction changed. That’s an excellent quality in an engineer, but a lousy quality in a leader. A good leader sees the forest and knows it has trees in it. A great leader sees both forest and trees. A lousy leader gets lost in the trees or just wanders around them in state of mild discomfort.

Also, Klobuchar’s staffer revealed that she’s a really vicious person behind that moderate demeanor. In that way, she reminds me of Dolores Umbridge, in the Harry Potter books: A soft, smiling mien hiding the soul of a bureaucrat completely wedded to the system that supports her power:

I don’t want to hear anyone say, “Well, Trump lies too.” Trump puffs. Crowds aren’t big; they’re huge. His policies are good; they’re the best policies ever. He constantly boasts and wiggles around the margins, but he’s true at his core. He says what he believes. He also says what he intends to do and then he does it.

Warren, however, lies about core things. She lies about who she is, what she’s done, and what she will do. Or, as the Times politely phrases it, “Senator Warren is a gifted storyteller.” She’s not a storyteller. She’s a stone-cold, sociopathic liar. Warren is Hillary, only with even less charm and more flop-sweat desperation to win, if either of those things is possible.

And so we get back to the main point, which is that, faced with an unelectable field, the Times decided to bunt and, as a last-ditch effort to save face in its world of identity politics, to split its endorsement between the two white women on the ticket. It’s a cowardly act, but one expects as much from the dinosaur media.

If you’ve ever seen Fantasia, this is what’s become of the New York Times, once one of the world’s mightiest newspapers in the grand old days of the dinosaur media: