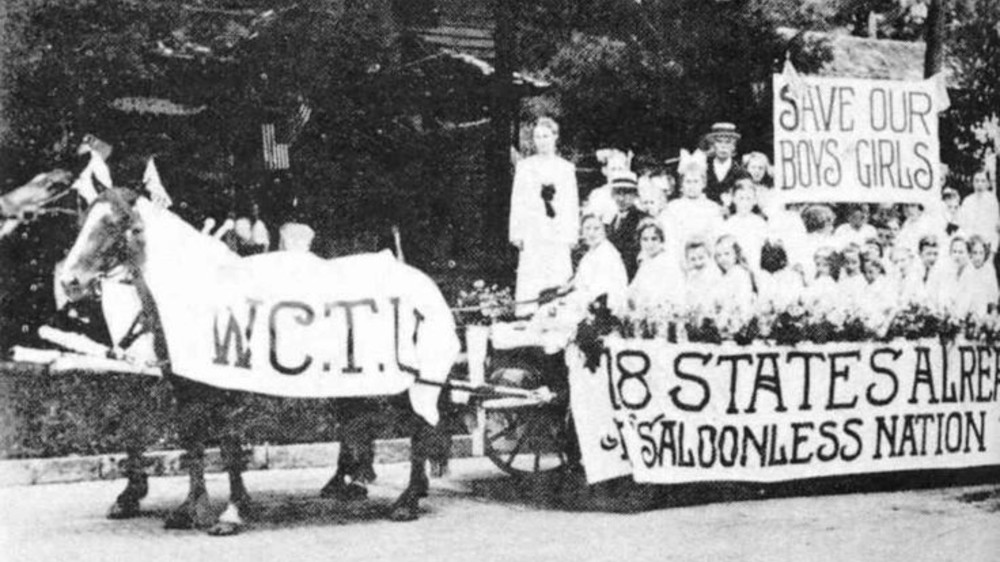 Because the government is a lagging, not a leading, indicator, its giant pieces of legislation almost always lead to perpetual bureaucracy and corruption.

I was talking yesterday with a friend — a lifelong conservative — who said, “You know, if I’d been alive in the 1960s, I probably would have supported Lyndon Johnson’s Great Society. It seemed like a good idea at the time and there was no way to see that it would destroy the African American family and lead to as many dysfunctions as it did, not to mention the ever-burgeoning bureaucracy.”

It occurred to me then that the Great Society plan suffered from exactly the same flaw as Prohibition: both of them created bureaucracies and overreaching laws after cultural change had already occurred. They didn’t lead to cultural change, they followed it, didn’t help it, and simply created all the problems that are always attendant on big government. Let me try to explain.

In the late 19th century, America had a really, really serious problem with alcoholism. Carrie Nation and the Women’s Temperance League and the “lips that touch liquor shall never touch mine” movement . . . they didn’t arise from American puritanism. They arose because America and Americans were drowning in alcohol:

We have oftentimes been a nation of drunks, but by today’s standards, average alcohol consumption in large parts of the 19th century U.S.A. was almost beyond rational belief. You will likely find it hard to accept as a fact just how much booze the average American was consuming in the first half of the 1800’s.

As [historian W.J. Rorabaugh wrote in his research on American alcohol consumption for The OAH Magazine of History] goes on to note: “By 1770, Americans consumed alcohol routinely with every meal. Many people began the day with an ‘eye opener’ and closed it with a nightcap. People of all ages drank, including toddlers, who finished off the heavily sugared portion at the bottom of a parent’s mug of rum toddy. Each person consumed about three and a half gallons of alcohol per year.”

When he writes “three and a half gallons of alcohol,” he’s talking about 3.5 gallons of pure ethanol, rather than gallons of a specific spirit. To convert that into a more graspable figure, that’s 8.75 gallons of standard, 80-proof liquor per year for the average person by the time of the American revolution. That’s already 45 percent higher than current consumption levels, but hold onto your seats, because the number gets much higher by the 1800s.

As [Daniel Okrent, in his book Last Call: The Rise and Fall of Prohibition] describes . . . the number of distilleries in the nation increased fivefold, to 14,000 in between 1790 and 1810. He writes that “in cities it was widely understood that common workers would fail to come to work on Mondays, staying home to wrestle with the echoes and aftershocks of a weekend binge. By 1830, the tolling of a town bell at 11 a.m. and again at 4 p.m. marked ‘grog time.’”

That old-time song, “Father, dear Father, come home with me now,” which tells about little Mary trying to get her father to leave the saloon wasn’t just heart-tugging 19th-century schmaltz, it was the reality for vast numbers of American families. Fathers routinely drank their paycheck away and, just as routinely, physically abused their families when they were roaring drunk.

The temperance movement, in other words, was a real response to a very serious problem. It was also effective. Indeed, it was so effective that it changed the way American society thought about alcohol. By 1920, when Prohibition went into effect, it wasn’t the leading edge of temperance, it was the lagging edge. And once the federal government got involved, everything changed, because when the federal government is involved, there’s always money to be made. Suddenly, entirely new vices rose up because of a federal policy put in place after the problem had pretty much been solved at the local level.

The same was true with Johnson’s Great Society. American blacks were doing better and better beginning in the 1920s and through to the early 1960s — and the Great Society destroyed that:

Despite the grand myth that black economic progress began or accelerated with the passage of the Civil Rights laws and “War on Poverty” programs of the 1960s, the cold fact is that the poverty rate among blacks fell from 87 percent in 1940 to 47 percent by 1960. This was before any of those programs began.

Over the next 20 years, the poverty rate among blacks fell another 18 percentage points, compared to the 40-point drop in the previous 20 years. This was the continuation of a previous economic trend, at a slower rate of progress, not the economic grand deliverance proclaimed by liberals and self-serving black “leaders.”
Ending the Jim Crow laws was a landmark achievement. But, despite the great proliferation of black political and other “leaders” that resulted from the laws and policies of the 1960s, nothing comparable happened economically. And there were serious retrogressions socially.

The murder rate among blacks in 1960 was one-half of what it became 20 years later, after a legacy of liberals’ law-enforcement policies. Public-housing projects in the first half of the 20th century were clean, safe places, where people slept outside on hot summer nights, when they were too poor to afford air conditioning. That was before admissions standards for public-housing projects were lowered or abandoned, in the euphoria of liberal non-judgmental notions. And it was before the toxic message of victimhood was spread by liberals. We all know what hell holes public housing has become in our times. The same toxic message produced similar social results among lower-income people in England, despite an absence of a “legacy of slavery” there.

There’s more data here, in an article by Sam Jacobs.

As with Prohibition, the government wasn’t taking the lead. Johnson was able to put his “Great Society” legislation into effect because society was already moving on from the worst effects of slavery, Jim Crow, and overt racism. And as with Prohibition, because government attached itself to the end rather than the beginning of the parade, the government managed to create a whole lot of what one normally finds at the end of the parade — horse doo-doo.

I’m not completely libertarian, because I believe there are more things that government should do than a pure libertarian thinks. However, as a general principle, I heartily endorse the sentiment expressed in 1837 in the United States Magazine and Democratic Review:

It is under the word government, that the subtle danger lurks. Understood as a central consolidated power, managing and directing the various general interests of the society, all government is evil, and the parent of evil.

A strong and active democratic government, in the common sense of the term, is an evil, differing only in degree and mode of operation, and not in nature, from a strong despotism. This difference is certainly vast, yet, inasmuch as these strong governmental powers must be wielded by human agents, even as the powers of the despotism, it is, after all, only a difference in degree; and the tendency to demoralization and tyranny is the same, though the development of the evil results is much more gradual and slow in the one case than in the other. Hence the demagogue – hence the faction – hence the mob – hence the violence, licentiousness, and instability – hence the ambitious struggles of parties and their leaders for power – hence the abuses of that power by majorities and their leaders – hence the indirect oppressions of the general by partial interests – hence (fearful symptom) the demoralization of the great men of the nation, and of the nation itself, proceeding, unless checked in time by the more healthy and patriotic portion of the mind of the nation rallying itself to reform the principles and sources of the evil) gradually to that point of maturity at which relief from the tumult of moral and physical confusion is to be found only under the shelter of an energetic armed despotism.

The best government is that which governs least. No human depositories can, with safety, be trusted with the power of legislation upon the general interests of society so as to operate directly or indirectly on the industry and property of the community. Such power must be perpetually liable to the most pernicious abuse, from the natural imperfection, both in wisdom of judgment and purity of purpose, of all human legislation, exposed constantly to the pressure of partial interests; interests which, at the same time that they are essentially selfish and tyrannical, are ever vigilant, persevering, and subtle in all the arts of deception and corruption.

In fact, the whole history of human society and government may be safely appealed to, in evidence that the abuse of such power a thousand fold more than overbalances its beneficial use. Legislation has been the fruitful parent of nine-tenths of all the evil, moral and physical, by which mankind has been afflicted since the creation of the world, and by which human nature has been self-degraded, fettered, and oppressed.

Government should have as little as possible to do with the general business and interests of the people. If it once undertake these functions as its rightful province of action, it is impossible to say to it ‘thus far shalt thou go, and no farther.’ It will be impossible to confine it to the public interests of the commonwealth. It will be perpetually tampering with private interests, and sending forth seeds of corruption which will result in the demoralization of the society.

Its domestic action should be confined to the administration of justice, for the protection of the natural equal rights of the citizen and the preservation of social order. In all other respects, the voluntary principle, the principle of freedom, suggested to us by the analogy of the divine government of the Creator, and already recognized by us with perfect success in the great social interest of Religion, affords the true ‘golden rule’ which is alone abundantly competent to work out the best possible general result of order and happiness from that chaos of characters, ideas, motives, and interests – human society.

Afford but the single nucleus of a system of administration of justice between man and man, and, under the sure operation of this principle, the floating atoms will distribute and combine themselves, as we see in the beautiful natural process of crystallization, into a far more perfect and harmonious result than if the government, with its ‘fostering hand,’ undertake to disturb, under the plea of directing, the process. The natural laws which will establish themselves and find their own level are the best laws. The same hand was the Author of the moral, as of the physical world; and we feel clear and strong in the assurance that we cannot err in trusting, in the former, to the same fundamental principles of spontaneous action and self-regulation which produce the beautiful order of the latter.

Both Johnson’s Great Society and the American prohibition experiment affirm the principles expressed above. Change can and should happen with the people, not with the government. Government is invariably responsive to, not responsible for, change and, once it gets involved, corruption and bureaucratic deadweight follow. It’s the latter that is especially pernicious for, as Reagan famously said:

No government ever voluntarily reduces itself in size. Government programs, once launched, never disappear. Actually, a government bureau is the nearest thing to eternal life we’ll ever see on this earth!