At PJ Media, the always-excellent Matt Margolis writes that it’s time to ask “hard questions” about Bernie Sanders’ infamous rape fantasy essay. I’d like to suggest that Bernie won’t mind those questions because he’ll have a good answer: His ugly opening paragraph wasn’t intended to promote sick sex but to protest it and to demand emotional equality between men and women

If you can make yourself read through the entire muddled thing, which veers between philosophy and cheap literature, you’ll realize that Bernie’s making a point and, much as I hate to say it, a good one. The point is that human history had created an unhealthy dynamic between men and women which needed to be corrected, but that feminism was turning into man-hatred, which destroys relationships.

Here’s the essay in its entirety. It is execrably written, in part because Marxists are always bad writers and in part because Bernie specifically was a horrible writer. 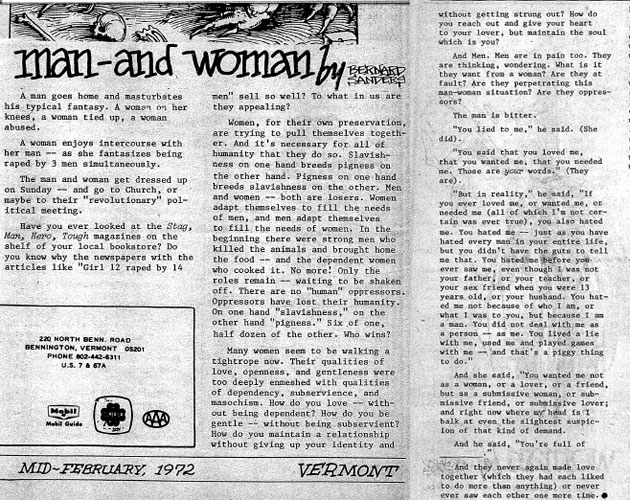 Most people never get beyond the opening paragraphs, by which time they assume that those ugly words represent Bernie’s own sexual fantasies, all of which center around women being abused and liking it:

A man goes home and masturbates his typical fantasy. A woman on her knees, a woman tied up, a woman abused.

A woman enjoys intercourse with her man – as she fantasizes being raped by 3 men simultaneously.

The man and woman get dressed up on Sunday – and go to Church, or maybe to their “revolutionary” political meeting.

However, if you keep reading, what you realize is that Bernie was trying to create a powerful, eye-catching lede by repeating the common currency in the hardcore men’s magazines and in ordinary newspapers:

Have you ever looked at the Stag, Man, Hero, Tough magazines on the shelf of your local bookstore? Do you know why the newspapers with the articles like “Girl 12 raped by 14 men” sell so well? To what in us are they appealing?

That was Bernie’s premise: Americans in 1972, on both the right (church-going) and the left (revolutionary meetings), were being sold a vile view of sex, whether in underground literature or in the mainstream media.

From that starting point, Bernie wrote paragraph after paragraph of free-form waffle that, once boiled down, seems to be saying that men and women should be equal partners:

Women, for their own preservation, are trying to pull themselves together. And it’s necessary for all of humanity that they do. Slavishness on the one hand breeds pigness [sic] on the other hand. Pigness on one hand breeds slavishness on the other. Men and women – both are losers. Women adapt themselves to fill the needs of men, and men adapt themselves to fill the needs of women. In the beginning there were strong men who killed the animals and brought home the food – and the dependent women who cooked it. No more! Only the roles remain – waiting to be shaken off. There are no “human” oppressors. Oppressors have lost their humanity. One one hand “slavishness,” on the other hand “pigness.” Six of one, half dozen of the other. Who wins?

Maybe I’m misreading the above paragraph (and that’s easy to do considering the truly awful, junior high school quality writing), but it seems Bernie was saying that women’s past dependency on men for food nurtured both men’s belief that women liked being dependent and women’s belief that men should be dominant. He was then trying to say that these sex roles were bad and needed to stop.

I’ll interject here and say something about woman’s romance literature. My beloved Jane Austen’s books are so delightful because her male and female characters are equals. They each need and learn something from the other, but neither is subservient and neither views the other through a veil of gender stereotypes. The same is true for Louisa May Alcott’s characters. Dorothy Sayers also falls in that tradition. (And yes, there are dozens of others, but those are the ones that spring to mind.)

However, there’s long been a genre of women’s writing that relies heavily on the dominant man sweeping away the woman. Although Charlotte Bronte’s Mr. Rochester and Jane Eye ultimately were equals (and she even proved to be the stronger character of the two), her book provided another template, one of powerful, brooding, domineering men. In many women’s romances from Charlotte Bronte on until the mid-1960s or so, this quality was represented in men seizing women and kissing them violently. That was as far as social acceptability could go. Men’s writing also traded on this “good, but incredibly dominant man” notion, which you can see in Ian Fleming’s The Spy Who Loved Me. In the book, James Bond is something of a brute but because he’s a righteous brute the woman willingly takes him to her bed.

By the late 1960s and early 1970s, romance novels started to take on a “rapey” feel, something that continued through the 1980s. The problem for romance writers was that good girls weren’t supposed to have premarital sex. By then, though, actual sex, not just implied sex, was selling, so the authors had to get the women into bed. The answer was to have “willing rape.” The “hero” forced sex on the woman, but it wasn’t actually rape (or as Whoopi Goldberg called it “rape rape”) because the woman secretly wanted it.

This was not a good era for the more graphic romance novels. Eventually, that whole icky rape fantasy idea went out the window when it became acceptable for women in romance novels to engage willingly in premarital sex. In a funny way, writing in 1972, Bernie seemed to have been honing in on this up-and-coming “rape fantasy” romance novel genre.

Having established that there was an unhealthy sexual dynamic at work in 1972 America, Bernie turned to gender roles. He wrote about women’s need to retain femininity while being strong. Ironically enough, this is the part of the essay that could actually hurt him today, not among conservatives but among strident feminists and those who deny that sex has anything to do with behavior:

In 2020, those are the real fighting words – to leftists, for they assume genuine gender differences.

Moreover, Bernie seemed to be aware that the rising tide of feminism in 1972 was predicated on man hatred:

And Men. Men are in pain too. They are thinking, wondering. What is it they want from a woman? Are they at fault? At they perpetrating this man-woman situation? Are they oppressors?

The man is bitter.

“But in reality,” he said, “If you ever loved me, or wanted me, or needed me (all of which I’m not certain was ever true), you also hated me. You hated me – just as you have hated every man in your entire life, but you didn’t have the guts to tell me that. You hated me before you ever saw me, even though I was not your father, or your teacher, or your sex friend when you were 13 years old, or your husband. You hated me not because of who I am, or what I was to you, but because I am a man. You did not deal with me as a person – as me. You lived a lie with me, used me and played games with me – and that’s a piggy thing to do.”

Even as Bernie recognized that men could feel women’s oozing hatred and contempt, he noted that, at the dawn of modern feminism, women had a legitimate complaint, which was that too many men didn’t view women as equals:

And she said, “You wanted me not as a woman, or a lover, or a friend, but as a submissive woman, or submissive friend, or submissive lover; and right now where my head is I balk at even the slightest suspicion of that kind of demand.”

In his awkward way, Bernie realized that men and women were at an impasse, staring at each other over an unbridgeable chasm:

And they never again made love together (which they had each liked to do more than anything) or never ever saw each other one more time.

I am second to none in my deep dislike for Bernie Sanders’ politics. (I set up an entire little blog to challenge Bernie’s pernicious ideology.) I think he’s a genuinely evil man to promote Marxist socialism, something he does even while he stands on the unmarked graves of its 100,000,000 victims, most of them killed during Bernie’s lifetime. Everyone says Bernie is honest but he’s not. No one can be honest when peddling the world’s biggest lie, which is that socialism benefits people.

Still, despite’s Bernie’s being evil, this 1972 essay is not the way to attack him from the right. It may be poorly written, but he was trying to make a valid point and there’s no use allowing him to expand on that point to his benefit.