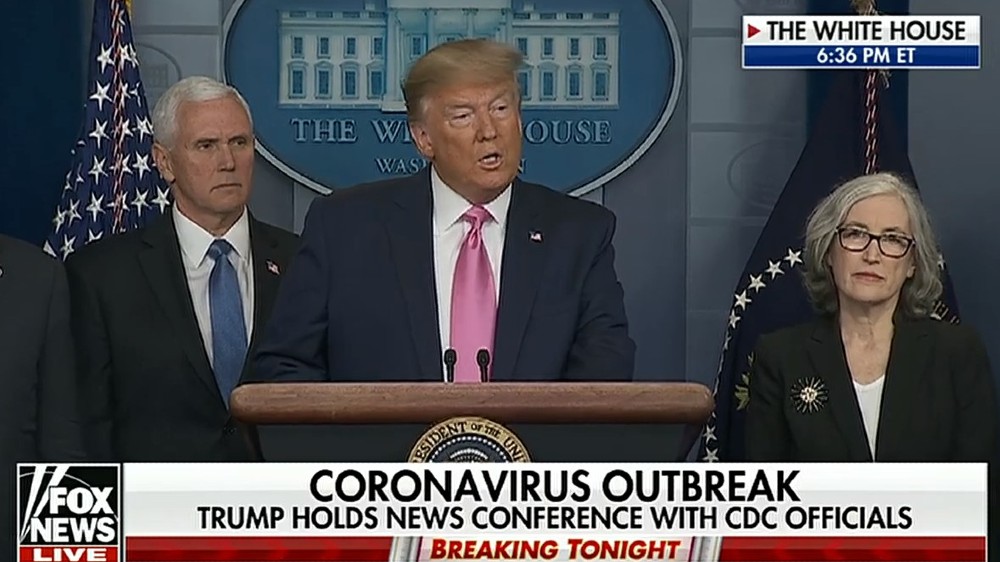 With coronavirus dominating the news, I’ve had time to come up with a few thoughts. The bottom line: Trump’s doing the right things and I’m not panicking.

I’ve been quiet about coronavirus. It’s unnerving and I can’t do anything to stop its spread, so there really hasn’t been much for me to say beyond that. However, having ruminated on the subject for over a month, I do have some comments:

1. I think Trump handled the press conference very well. He was relaxed but serious. He was careful not to incite panic but also didn’t underplay the threat.

2. What Trump said was consistent and intelligent: (a) We’ve got the best systems possible in place, (b) Pence is a stellar point person because he’s had executive experience with epidemic disease in Indiana, (c) I currently have a strong team working on it and can instantly bring qualified people on board to help if the dynamic shifts, and (d) aren’t you grateful now that I closed America to planes from China? While you were busy calling me xenophobic, I was busy saving your collective derrieres. I like the idea of Pence in charge. He strikes me as an organized thinker, an intelligent man, and an effective leader.

3. Trump’s assessment of the situation also struck me as spot-on: We don’t know if it’s going to get better or worse, or if it will hit hard, soft, or not at all. We are just working on plans for every eventuality.  The fact is that, with the current state of the disease, if he said anything else, he would have been lying.

4. I like knowing that a pragmatic, effective executive is in charge of one of government’s core functions, which is to stop the spread of epidemic disease. While I don’t think the government should be telling colleges to make sure that all men accused of sexual harassment are destroyed (as Obama effectively did with the “Dear Colleague” letter), I strongly believe that government exists, in part, to have a plan in case of disease outbreaks. Apropos the government’s role, I find it morbidly amusing that in China, Italy, South Korea, and all other countries affected by the coronavirus, governments are calling upon the same weapon they’ve used since time immemorial in the face of epidemic disease: quarantine. Some things never change.

5. What we’re being told now is to wash our hands, stay home when sick, avoid people who are sneezing and sniffling, disinfect surfaces that a lot of people touch, keep hands away from faces, etc. This all works for me because I do it anyway. I’m something of a germaphobe. Within my own home, I’m pretty good but when I go out into the world, I see bacteria everywhere. I’m the one at the market cleaning my shopping cart with a disinfectant wipe. I learned years ago that shopping carts are amazing disease vectors, especially because of the kids who sit in them. When I get back to the car, I disinfect my hands before touching anything. I’ll then disinfect anything I may have touched in the store too: My wallet, my phone, etc. I sneeze in my elbow and hope others will too.

6. One of the problems with coronavirus is that, even though it’s an upper respiratory disease, it’s apparently also spread by fecal matter. That means it will be a disaster in places that don’t have good fecal matter control: China (a very dirty place with primitive toilets and no culture of handwashing), India (which is working hard to bring toilets to people but it’s slow going), Africa (a world drowning in fecal matter), and San Francisco (another world drowning in fecal matter). San Francisco’s mayor, London Breed, was smart to declare a public health crisis. Of course, if SF handles the problem the way it did AIDS, it will refuse to take steps against disease behaviors for fear of being politically correct. Here’s the bottom line: If we observe good toilet hygiene, we have a better chance of avoiding the spread of infection.

7. I don’t trust China at all, so I assume the numbers of infections and deaths are higher than reported. Having said that, I’m pretty sure we’re not seeing something like China in 1347 and Europe in 1348. That was when the Black Plague killed off 1/3 to 1/2 of the world’s population.

There are a few reasons I’m not seeing what’s happening as an Armageddon-esque event. First, the plague was an extraordinarily aggressive disease, sometimes killing people within hours. Second, the plague was also an extraordinarily contagious disease that seemed to have no mild form during its first pass through the world. (Coronavirus can be so mild that people don’t know they have it.) Third, we have better ways to treat secondary symptoms, such as infections or swelling in the lungs. Also, the government is testing antiviral medicines to see if they help.

Currently, the mortality rate for coronavirus is around 2%, which is much greater than for the ordinary flu, so that’s bad. Still, 2% is not 40% or 50% or 90%. That helps me keep perspective.

8. I thank goodness that Trump has been forcing American businesses to stop being so dependent on China. Our dependence is bad now but think how much worse it would have been if this had hit three years ago. I worry a great deal about the fact that we farmed all of our pharmaceutical manufacturers to China, though. That’s not just in terms of drugs for coronavirus; it’s about drugs for everything. We should never have become dependent on another country for something so basic as medicines. Still, that’s another thing I can’t affect and that just makes me nervous when I think about it.

9. I’ve got a lot of my retirement money in the market. I know the market will drop. I am not going to panic because I’m fortunate enough to have resources for the next few months. This too shall pass and the market shall rise again.

10. The media lives for occasions like this. Panic sells and they also see it as a way to attack Trump. Just as I don’t trust China, I don’t trust the media either.

11. The last time I wrote about coronavirus, I wrote about the Chinese penchant for eating wildly exotic foods (bats, live mice, etc.), which creates a risk of zoonotic diseases (i.e., diseases that leap from animals to humans). I’m seeing more reports saying that it’s likely that the Chinese made the disease in a lab and released it deliberately or accidentally. I remain agnostic about this. I wouldn’t be surprised but I’m not going to get my knickers in a twist about something so speculative.