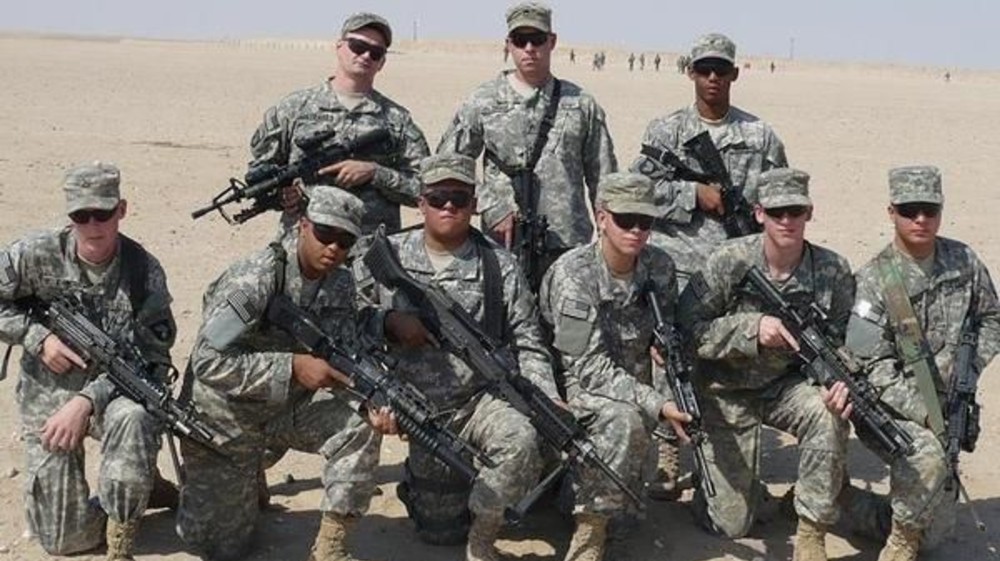 On the heels of Biden’s textbook racist statement, that, “If you have a problem figuring out whether you’re for me or Trump, you ain’t black,” the NYT does damage control by claiming the U.S. military is “celebrating white supremacy.”  It is the single lowest attack from these worthless race hustlers since their 1619 Project attempted to rewrite U.S. history.

I’ll begin this essay with a biographical note.  Between my time as a cadet at The Citadel, a military college in Charleston, SC, in the 70’s, and then as an Infantry Officer in the U.S. Army in the 80’s and 90’s, I lived in a fully integrated world, one wholly without the racial politics of the civilian world.  That was largely true of Charleston, S.C. as well.  In the Army,  about a third of my soldiers and a quarter of my fellow officers were black and probably an equal number Hispanic.  I saw no hint of racism or reverse racism during my time in those jobs and locales, nor would even a hint of it have been tolerated.  Everyone was given the same opportunities and either succeeded or failed based on merit measured against a single standard for success.  Period.

My sense was that the military, integrated by order of President Truman in 1952, had been free of racial politics since at least the end of the Vietnam War in 1972.  My sense in retrospect, now 20 years removed from the military, is that no institution in America has played a more important or positive role in integrating the United States.  My two mixed-race children subsequently joined the military, with my son still in.  I have heard nothing to change my opinion of the positive role being played by the military in the years since I left the service.

So for the editorial board of the NYT, the nation’s leading purveyor of toxic racial / identity politics, to accuse the military, on the day before a national holiday honoring those men and women who fell in service to our country, of being a bastion of “white supremacy,” is the single biggest slap in the face to our soldiers that I can imagine.  And it is pure bullshit.

Before looking at their screed, let’s take a look at the NYT editorial board.  It is made up of 15 mostly lily-white men and women, and not a single one of these worthless scum have a bio indicating even a day spent in military service to our country.  There are plenty of the fifteen who graduated from ivy league journalism schools, and there is even one man who proudly listed his award of a 2010 Soros Justice Fellowship.  These people have no f******* clue what goes on in the U.S. military.  What they have is an incredibly refined ability to invent racism where none exists.  Or as Leonydus Johnson put it in a tweet about Democrat response to the Biden race-bomb:

These clowns find a way to find hidden racism literally EVERYWHERE and somehow can’t manage to see it where it actually exists. . . .

So with that intro, let’s take a look at what the race hustlers at the NYT do to slime the U.S. military — and in particular, the Army — on the day before Memorial Day.   The name of their scandalous opinion piece is Why Does the U.S. Military Celebrate White Supremacy?   The logic of the editorial board is that, because several U.S. military bases in the South were named after Confederate generals over a century ago, that means that today’s military is full of white supremacists.  Oh, and the Confederate Flag is the equivalent of a Nazi symbol.  It is all one giant, toxic non-sequitur.  Given its timing, it is hard to see it as anything other than the NYT looking at Biden, then looking to America, then pointing away from Biden while yelling  “squirrel.”

The NYT begins its slander by bringing up the case of Dylan Roof, the young man who, in July 2015, murdered nine blacks in Charleston at the Emanuel A.M.E. Church.  Roof posed with the Confederate flag before his murder spree.  Enraged by BLM and the Treyvon Martin race fiasco, Roof was attempting to start a race war.  All of the inexplicable nuances of Roof, such as the fact that he had several black friends and never showed or spoke of anything racist, are ignored by the NYT, who claim that Roof’s mass murder is proof that the Confederate Flag was not merely an innocuous cultural symbol of the South, but a symbol of “Confederate ideology and a blood-drenched tradition of racial terrorism that dates back to the mid-19th century in the American South.”

There is a tremendously important lesson from the Dylan Roof mass murder — but its not the intellectually lazy point that the NYT editorial board wants to make.  In 2015, America was exploding with black violence led by the BLM movement.  Anywhere a black person died at the hands of police, BLM was there to fan the riots, from Ferguson to Baltimore and other cities.  After the Roof mass murder occurred, BLM agitators descended on Charleston, SC.  It turned out that Charleston, SC, a city 25% black in a state that is 29% back and represented by the nation’s only black Senator, Tim Scott, was the only city in 2015 with a huge racial incident that suffered no rioting.

The city, black and white, came together in the wake of the Roof mass murder — as I expected them to, frankly.  As then Gov. Niki Haley observed, two months after the murders, “South Carolina didn’t have riots, we had vigils . . .  We didn’t have yelling, we had hugs and prayers.”  Ironically, I suspect that a large part of that shared feeling of being American, regardless of one’s skin color, likely has a lot to do with the very sizeable portion of veterans and active-duty military who reside in the South, and who reside in Charleston in particular.

The simple fact is that you will find better race relations in the American South than you will anywhere in the U.S.  As Ms. BWR wrote of her first visit to the old South in 2015

Speaking of the South and race, I’ve never seen a part of the U.S. that’s as racially integrated as the South. Wherever we went, people of all races dined together, traveled together, worked together, or were clearly dating or married without regard to racial boundaries. . . .

In the South, the races seem to be comfortable to mix-and-match. This integration was so obvious that even the Leftist in our party, who had already delivered a lecture — predicated on the Confederate flag kerfuffle — about the South’s racism, was forced to comment upon the harmony we saw.

When I was at the Citadel, a place where the cadets, in 1861, fired the first shots of the Civil War, the Confederacy and the Civil War were a part of the school’s Southern Heritage.  The fight song of the Citadel was Dixie.  It was a fully integrated institution and no one looked to the Confederate flag as a symbol of racism or race hatred.  The same was true in Charleston itself.  For example, there is BBC host Stephen Fry’s interview of a black school teacher, Anita Prather, in South Carolina when he specifically raises the issue of the Confederate flag.  The interview starts at 35:16:

Personally, I could care less about the Confederate flag.  But I resent people like the NYT editors who are using it to delegitimize and erase the history of America, just as they are doing with our Founding in the 1619 Project.

Back to the NYT editorial.  From the Confederate Flag, the NYT reasons:

This same toxic legacy clings to the 10 United States military installations across the South that were named for Confederate Army officers during the first half of the 20th century.

So a century ago, when the U.S. established permanent bases in the South, they chose the names of generals from the particular states who had served in the war and who had fought with honor.  So, for example, in Georgia, the home of the U.S. Army Infantry, my old happy hunting ground, is Fort Benning.  Established in 1909, the post was named after a Georgia native and Confederate General, Henry Arthur Benning.  From a 2015 Time Mag article:

Both the Army and the South are tradition-bound entities that revere their past. Each of the posts was named for a Confederate officer long after the Civil War, including many in the first half of the 20th Century when the U.S. military was rushing to open training posts for both world wars. Army Colonel Steve Warren, a Pentagon spokesman, said Wednesday there is “no discussion” underway about renaming the posts.

The Army itself stood firm. “Every Army installation is named for a soldier who holds a place in our military history,” Brigadier General Malcolm Frost, the service’s top spokesman, said Wednesday. “Accordingly, these historic names represent individuals, not causes or ideologies. It should be noted that the naming occurred in the spirit of reconciliation, not division.”

And that’s it.  That is the whole of the NYT argument that the military, the single most important engine for improving race relations in this country, is “celebrating white supremacy.”  Not a single soldier alive today, whether active duty or vet., was even born when these installations were named.  I doubt if a single soldier working on any one of those installations today have ever given a second’s thought to the to the name of their respective post.  And I am absolutely sure that only the same “clowns”  who can “find hidden racism literally EVERYWHERE” are able to find a “celebration of white supremacy” in today’s military because of the century-old names of its posts.

What is really going on here is this: The NYT editorial board and the people like them are worthless pieces of human excrement agitating for one thing only — political power — and they don’t give a rat’s ass if they have to destroy this country and every person in it to get that power.  These people are in a zero sum game and are playing to win at any and all cost.

That said, let’s take this one further and follow the NYT argument to its logical conclusion.  If any institution that once had a role in promoting racism must now be condemned — or else it is de facto proof of racism and the celebration of white supremacy — then what of the single most destructive, despotic and racist institution in U.S. history.  I am speaking, of course, of the Democrat Party — the party of slavery, of Jim Crow, of Woodrow Wilson, the NYT, and Joe Biden.  As Andrea Widburg writes at American Thinker:

The  Republican Party, which nominated Abraham Lincoln, was formed specifically to counter the Democrat Party’s commitment to slavery. Lincoln’s Democrat opponent, Stephen A. Douglas, owned a Mississippi plantation (in his wife’s name), never condemned slavery’s immorality, and held to a state’s rights view of slavery that would have allowed it to continue in the South and move into new American territories.

After the Civil War, the South remained single-mindedly Democrat up until the old guard of segregationists finally died out. This was the same old guard, by the way, that Joe Biden, the de facto Democrat Party candidate, cuddled up to during his first decade in the Senate.

Indeed, Times glosses over lots of its party’s racist history. For example, as part of slamming the military, the editors praise Truman (a Democrat) for integrating the military. They forget, however, to castigate Woodrow Wilson (a Democrat whose name is all over Washington, D.C.) for segregating the entire federal workforce.

The Times slanders the military, the most integrated institution in America, by resurrecting people whom everyone has forgotten, and about whom no one in the military complains. Meanwhile, the Times’s chosen party is the living embodiment of race-obsessed politics. The Democrat Party ought to have been outlawed in 1865, just as the Nazi party was outlawed in 1945.