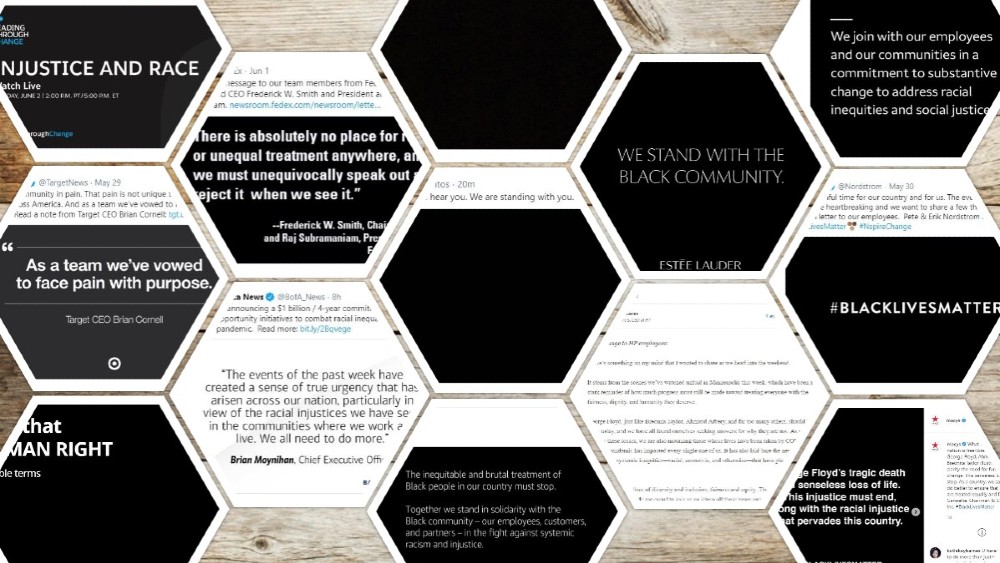 America doesn’t have institutional racism. It has a black community that undercuts itself and enablers who allow blacks to blame others for their failings.

I know this sounds petty given the outrages on American streets, but one of the things that irritates me most is the corporate virtue signaling that’s going on. Whether on their home pages or social media, various corporations are in a race to abase themselves. It’s difficult to determine whether they’re doing this because they think it’s good business, or because their management is now made up almost entirely of leftist-indoctrinated white college grads, or because they’re trying to deter the looters from attacking them. (If that last is their goal, they’re failing miserably, as I’ll discuss more below.)

The most ridiculous thing about corporate America’s pushing the “we stand against systemic racism” narrative is that there is no systemic racism in America. Legally it is not allowed. Practically, there are two real problems, and they’re both buried within the black community. The first problem is that blacks commit crimes in numbers disproportionate to their representation in the population; the second is that there is a damaged black subculture that aims relentlessly downwards, not upwards.

As I noted in the opening paragraph, the corporations are abasing themselves for one of three reasons: A marketing scheme, a plethora of management employees who graduated from American colleges in the last 25 years or so, or a payment to the Black Lives Matter movement along the lines of a protection racket.

If the last, it’s not working. As President Trump tweeted, Macy’s had all of the ground-level windows on its flagship New York store smashed:

Macy’s at 34th. Street, long the largest single department store anywhere in the world, & a point of pride in NYC, was devastated yesterday when hoodlums and thieves vandalized it, breaking almost all of its large panels of storefront glass. What a shame. Bring in National Guard!

A Mercedes-Benz store in Beverly Hills was looted:

A Bank of America in San Bernardino was looted:

Bank of America being looted, reported as San Bernardino pic.twitter.com/B1Udsj0Ur9

A Wells Fargo in Minneapolis was looted:

A FedEx in Melrose Park was looted:

A Footlocker in Austin was looted:

Austin is WILD !! 😂 Looting the Footlocker on Capital Plaza ! And the Cops were right by us blocking Target 😂😂 #ATXprotest #protests2020 pic.twitter.com/KzVozZViLY

A Nordstrom in Seattle (Nordstrom’s home town) was burned down:

And of course Target, one of America’s premier virtue signalers, was at the epicenter of looting in its hometown of Minneapolis:

Corporate America has a lot of problems, including cowardice, greed, and way too many leftist management employees, but systemic racism is not one of the problems.

The black community’s problems lie with the black community. It’s true that a disproportionate number of blacks are victims of police violence relative to black presentation in the American population.

Do not forget the statement about lies, damn lies, and statistics. The implications flowing from that statistic are a damn lie. The police are not systematically slaughtering blacks.

The statistic hides the fact that blacks are disproportionately responsible for crime in America:

Today blacks are about 13 percent of the population and continue to be responsible for an inordinate amount of crime. Between 1976 and 2005 blacks committed more than half of all murders in the United States. The black arrest rate for most offenses — including robbery, aggravated assault and property crimes — is still typically two to three times their representation in the population. Blacks as a group are also overrepresented among persons arrested for so-called white-collar crimes such as counterfeiting, fraud and embezzlement. And blaming this decades-long, well-documented trend on racist cops, prosecutors, judges, sentencing guidelines and drug laws doesn’t cut it as a plausible explanation.

Moreover, despite primarily preying on each other, blacks are also disproportionately responsible for crimes against whites:

And what about the famous “driving while black” problem? That’s a myth too:

According to the study commissioned by the New Jersey attorney general and leaked first to the New York Times and then to the Web, blacks make up 16 percent of the drivers on the turnpike, and 25 percent of the speeders in the 65-mile-per-hour zones, where profiling complaints are most common. (The study counted only those going more than 15 miles per hour over the speed limit as speeders.) Black drivers speed twice as much as white drivers, and speed at reckless levels even more. Blacks are actually stopped less than their speeding behavior would predict—they are 23 percent of those stopped.

Does this data mean that blacks are less capable of being law-abiding then whites? Of course not.

Early on, the alcoholic denies that there’s any problem at all. Sure, he has a few memory lapses and makes a fool of himself at parties, but it’s not a big deal. When the consequences increase, the alcoholic in denial starts the blame game: My boss is a jerk; my wife is a nag; the cop who pulled me over was an anti-black / anti-Hispanic / anti-white / anti-man / anti-Mercedes driver; that stupid woman cut in front of my car; the judge was a hard-ass….

We all know that the only way the alcoholic is going to end this destructive behavior – destructive to himself, his family, his colleagues, and his community – is for him to acknowledge that he has a problem and that he is the problem.

Slavery ended in 1865. The Jim Crow era ended in 1964 with the passage of the Civil Rights Act, almost 60 years ago. Over 85% of the population today was under ten years old the last time institutionalized racism existed. Today’s whites were not the problem with slavery and Jim Crow and today’s blacks were not the victims.

There are racists today. Pick any race, and you’ll find people within it who hate other races. As a Jew, I certainly know about that. After all, next to American Muslims, who hate Jews with a burning fervor, the most anti-Semitic cohort in America is blacks. (The link is a little old, but believe me, since then, the problem has gotten worse, not better.)

This is a Jewish joke. It could be a black one:

No, it’s not always anti-Semites and racism. Sometimes it’s you. When that small cohort of blacks that treats itself like garbage starts cleaning up its act – less crime, less antipathy to education, more marriage, a smaller chip on its collective shoulder, a greater willingness to bring energy and intelligence to work – then I’ll believe it when blacks and white liberals say we live in a world of systemic, institutionalized racism.

I blame middle-class blacks, too, even though they don’t show any of those behaviors. Somehow they managed to escape racism, but when they’re faced with that percentage of blacks that fails at everything but crime, suddenly these middle-class blacks blame racism and only racism.

Going back to my alcoholism analogy, these middle-classers are enablers. And by the way, a lot of people like being enablers. They complain about the person they’re enabling, but they enjoy the feeling of superiority.

Despite 4,000 years of consistent genocidal mania, which ended with 6,000,000 slaughtered in four years, Jews have done all right. Their collective success is not because of some evil cabal. It comes about because the Bible tells them to live justly, and the majority of Jews do.

I am certain that every black in America is at least as good as, as smart as, as honest as, and as capable as every Jew in America. Or, for that matter, the equal of Asians, Whites, Hispanics, and all other races in America. I believe we’re all God’s children or Nature’s children or whatever’s children, but that we are fundamentally equal. Sure, there’s always going to be a bell curve, with some people more athlete, more beautiful, more mathematically-gifted, or more verbal, but that’s a HUMAN bell curve, not a racial bell curve. What I almost sure of is that those people who strive, who aspire, and who abide by basic legal principles (including driving at the speed limit) will – on average – do better. Not all will. Yes, some will run afoul of jerks, racists, and even evil cops. But on average, in America, the recipe for success is always the same: Work hard in school, work hard at work, abide by the law, get married, have children, stay married.

(I know that black kids are trapped in stinky schools. Blame virtue-signaling white leftists and black race hustlers for that because they oppose vouchers that increase competition and, therefore, quality. But blame the black community for not emphasizing education and allowing their children to run with the idea that getting educated is a form of race betrayal.)

So, now I role back to where I started, which is those virtue-signaling corporations. These craven enterprises are simply more enablers who perpetuate the race-aholism that perpetually afflicts America’s black community.

UPDATE: This! (And watch for the white Karen telling her to go away.)

Random postscript: Considering that blacks are the primary victims of black crime, I think all law-abiding black citizens should be armed. Since the problem of black crime begins at home (meaning the neighborhood), that should be the best way to control the problem. Unfortunately, those white liberal enablers and their black race-hustler cronies have decided to disarm those law-abiding blacks suffering in urban black communities. UPDATE: How could I have missed Ben & Jerry’s screed?

why did Ben and Jerry’s statement on dismantling white supremacy educate me more about black history than 12 years of sitting in history class? pic.twitter.com/NiWE1ETi8s