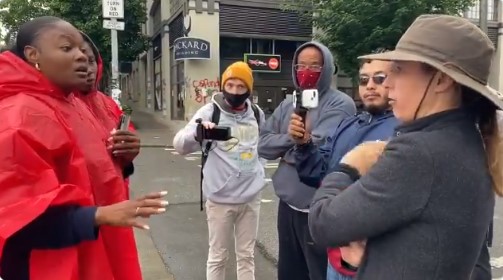 The media keeps the focus on blacks whom leftists have taught to hate. In America, though, there are probably more blacks who don’t hate. Here are 3 of them.

I went to the gun store again today, which is always a pleasant way to pass time. (By the way, thanks to all of you for your helpful ideas about which guns to buy.) Having handled about a dozen semi-automatics and test-fired the top three candidates, I think I’m going to get a Ruger because it fits my hands. I also stocked up on ammo. Better to have it when you don’t need it, than to need it an not have it.

As always, I find gun stores and ranges delightful places to be. The employees are friendly and helpful — and so are the other shoppers. If you say “Hi, how’s your day?” to a gun store shopper, they’ll stop and answer and you’ll have a nice conversation. Which gets me to my first story about the blacks who didn’t riot.

Regarding racism, my friend and I were standing in line outside the store (stores here are open but they have to limit the number of customers), when a black man came to stand in line behind us. I immediately said hello to him and asked him how his day was going. He responded that his day was great and asked us how ours was going. A little civil chit-chat followed.

Then, bless him, this young man went out of his way to assure us that he was not someone who hated us because of our skin color. He didn’t say so directly. Instead, he told us that it’s great to have guns and that people here have them because “We’re all in this together.” Those stupid rioters, he said, they burned a car and made some mess, but they’re not who we are.

It was an utterly endearing thing to do, and further conversation revealed that he was as nice as his first instincts showed him to be. But his kind gesture also made us aware of how much the world has changed. Once upon a time, nice white people hastened to assure black people not to worry. Now it’s the other way around. I want to us all, black, white, Hispanic, Asian, blue, green, purple, to live in a world in which such assurances are unnecessary, but I am so grateful to those who realize we’re not in that world yet and who make the effort to ensure that their own little patch of earth is a friendly place.

The amazing woman in this video is Bevelyn Beatty, a preacher woman who journeyed to CHAZ to spread the gospel. When you hear her speak to those white leftists about the gospel of the Republican party and the anti-gospel of the Democrat party, it’s powerful stuff, especially because she comes to them from a place of love, not anger:

This street preacher is amazing!

“I know people don’t like Trump. If I had to pick between him and @JoeBiden I am not voting in Joe Biden. You want to see black people go to jail by the next 4 years vote for Joe Biden.”#Joebiden #chaz #CHAZCHOP #seattleprotest pic.twitter.com/BWLEkC1T86

I’m not about to convert to Christianity because of her — I’m good with my Jewishness — but I deeply admire that spirit. Ryan Bomberger, an adopted black man who dedicates his energies to the pro-Life movement, wrote an incredible article for Townhall stating that he will not stand with Black Live’s Matter. This paragraph stood out:

There is no goal of forgiveness or reconciliation. None. It’s never mentioned on their sites. You can’t talk about the sins of the past and expect to move forward if there is no intention of forgiveness. I’m tired of the deeply prejudiced oppressed/oppressor critical race theory paradigm. It’s not Gospel-centered. This should, immediately, be a deal-breaker for Christians.

Beatty opens that door for people.

The one thing where I part ways with Beatty is her explanation challenging the Democrat party’s anti-historic argument that the parties magically switched — that is, they claim that, while it was Lincoln and his fellow Republicans who freed the slaves, and admit that it was Southern Dems who introduced Jim Crow (although they’ll never admit to owning the KKK, the Dems paramilitary arm), they contend that the Civil Rights Movement triggered a switch, whereby Republicans suddenly became racists and Democrats became the saviors of the blacks.

Beatty’s right that this switch story is a lie, but I would frame it a bit differently. For the most part, Northeastern (and West Coast) Americans were every bit as prejudiced as Southerners. However, they were different in two ways from the South: They didn’t believe in slavery and they didn’t have blacks living amongst them, as was the case in the South. Regarding that second point, Northerners simply consigned blacks to ghettos.

The “switch” happened because, when the Civil Rights movement and Brown v. Board of Education forced the South to abandon state-legislated racism, the ordinary people naturally slipped into faith in the free market, in America, in the Constitution, and in the true brotherhood of man. I will say again what I’ve said before, which is that, while I’m sure there are mean-spirited racists in the South, I’ve seen more mixed-race families here than I ever imagined could exist, more mixed-race friendships than I’ve ever seen in my life, and simply more friendly people of goodwill.

And here is the last black person who did not riot. Her tour of a trashed grocery store, along with her statement that she is a person of honor who pays for her things, is utterly heartbreaking:

To all of you tolerant liberals who displayed your wokeness by justifying rioting while sitting on your fat comfortable asses totally insulated from the damage, this is what you supported. This is on you. Congratulations you despicable monsters.

I don’t know who that woman is, but I wish I did so I could set up a Publir for her. Publir is the free speech alternative to the hard-left GoFundMe. Technically, it’s for sites such as mine to raise money for themselves, but it seems to me that it would also work perfectly well to raise money for someone like the woman narrating that video.

Those stupid, pompous, virtue-signaling Hollywood people who make cringy videos and donate to the looters need to have this video shown to them every hour of the day, 24-hours a day, for the rest of their pathetic, shallow, trend-following ignorant lives.