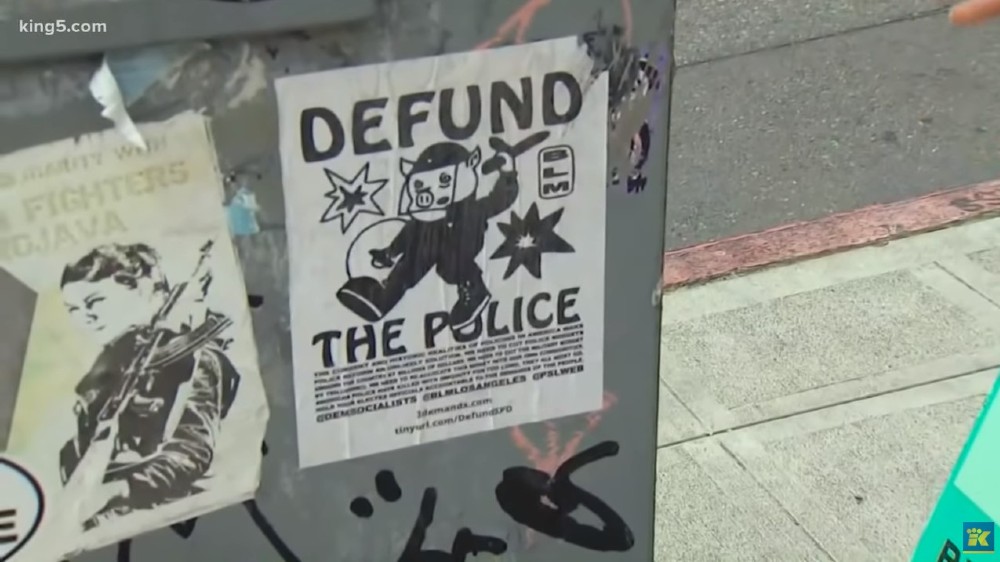 The speed with which the Defund the Police movement is breaking American cities is a dangerous harbinger of the totalitarianism that always follows anarchy.

A measure of the amount of energy in a physical system not available to do work. As a physical system becomes more disordered, and its energy becomes more evenly distributed, that energy becomes less able to do work. For example, a car rolling along a road has kinetic energy that could do work (by carrying or colliding with something, for example); as friction slows it down and its energy is distributed to its surroundings as heat, it loses this ability. The amount of entropy is often thought of as the amount of disorder in a system.

The above is a long-winded way of saying that it takes energy to hold systems together. Take away the energy and things fall apart.

I first became aware of this principle when I was in Bogata, Columbia, on a long-ago cruise. The city sat on the edge of a jungle and it looked as if it was losing the battle. It was clear that the people lacked the will (and, I’m sure, the money) to push nature back and keep the city relatively pristine. Coming from a fairly well-maintained United States, it suddenly occurred to me that it’s not a given that cities will chug along. If people stop making the effort, the cities fall apart.

As I got older and became responsible for more things — a business, a home, a family — I realized that it requires constant energy to maintain minimal function. If you don’t do the family laundry for a few days, the effort of getting back on the laundry track is overwhelming. The same is true for cleaning, shopping, paying bills, weeding the garden, etc.

Any person who’s reading this who has ever sent me an email knows that I always let my email get out of control and that I can be weeks or even months behind in responding to people. I wish I were as good at staying on top of my email as I am at the groveling apologies I owe people for my delays.

At bottom, falling apart happens quickly. Any subsequent efforts to resurrect whatever entered an entropic state happens slowly, with great effort and expense.

What we’re seeing in American cities that are defunding, or simply demoralizing, the police is entropy on a massive scale. The riots quickly destroyed the infrastructure, with buildings burned, stores looted, and history and other aesthetic touches destroyed. Now, the cities are facing the long haul, which is a reversion to pre-modern conditions. Before the modern era, cities were dirty and very, very dangerous. Highwaymen went after vehicles and cutpurses, robbers, muggers, and murderers went after everyone.

Lately, the news is filled with stories of mobs attacking drivers in the cars. The mobs block roads — often with approval from Democrat mayors — and any drivers unlucky enough to get caught are at serious risk of getting dragged out of their cars and beaten, robbed, or killed. Up until recently, Americans understood that this behavior was in the more dangerous parts of third world countries, not in their own towns and cities. This change has happened over the course of six weeks.

Communities that were once relatively safe are now terribly dangerous. One of my Little Bookworms had planned a trip with friends to one of these dangerous cities, a place she and her friends know well thanks to their college years there. They’d booked an Airbnb in the city about . . . well, six weeks ago. They knew when they booked that it was in a relatively safe neighborhood. When they arrived at the Airbnb, however, they were terrified by how it looked. It had the feel of a crime waiting to happen.

My little Bookworm pulled up the police crime map on her phone and they discovered that a neighborhood that, just six weeks ago, was fairly safe, was now crawling with assaults, robberies, rapes, and shootings. In the past six weeks, there have probably been 40-50 violent criminal acts in the neighborhood.

Little Bookworm called me wondering whether they should stick it out because they’d already paid for their lodging. My message: “Get the heck out of there and do it fast.” I was so concerned that I offered to pay for their hotel room in a nearby suburb. I think it was this offer that made the kids realize that I was not just suggesting something; I was genuinely terrified for their safety. Fortunately, they had a friend who lives in what is still a safe enclave and they were able to pile into their friend’s apartment.

My Little Bookworm was inclined to be angry at the person who’d made the booking, feeling that he had failed them. I assured her that he had done nothing wrong. It was a reasonable booking when he made it. What they had just witnessed first hand was the speed of entropy. In the case of cities, when the police are chased away, the bad guys come out to play.

One of my consistent refrains is that, contrary to Anne Frank’s wistful statement that “In spite of everything I still believe that people are really good at heart,” they are not good at heart. Even Anne Frank knew that. She explained in the next sentence that she believed this because she could not bear the horror of thinking otherwise:

In spite of everything I still believe that people are really good at heart. I simply can’t build up my hopes on a foundation consisting of confusion, misery, and death. I see the world gradually being turned into a wilderness, I hear the ever approaching thunder, which will destroy us too, I can feel the sufferings of millions and yet, if I look up into the heavens, I think that it will all come right, that this cruelty too will end, and that peace and tranquility will return again.

Within days of writing the above words, Anne Frank was on her way to Auschwitz. Of the nine people who spent two years hiding in those back rooms in Amsterdam, only her father survived. The older people were gassed right away, Peter van Pels died in Mauthausen in Austria, and Anne and her sister Margot, after working as slave labor in Auschwitz, died of typhoid and starvation at Bergen Belsen.

People have to be taught to be good. Every parent knows that this is hard, hard work. Children may be loving but they’re not good. With a child, entropy into bad behavior is a daily battle. You must constantly teach them moral values, kindness, self-control. You must be ever vigilant to catch them being good (a central tenet of successful parenting) and to correct them when they’re not good.

Individual goodness is not enough. You also need a societal framework that encourages good behavior and constrains and punishes bad behavior. A good government creates conditions for liberty, a good society enables morality (the Bible is a good place to start), and a good local government polices bad behavior. When any one of these things breaks down, unless you have a citizenry that is 100% moral, the predators and grifters will emerge and take over. That’s what’s happening in places that take seriously the Marxist demand that America’s cities defund the police.

Further, as the title of this post says, that slide into degradation is fast. You need to stop it instantly or you’re going to discover that it takes an enormous effort to pull out of that abyss — and that many lives will be lost or destroyed along the way.

This video from Dallas shows the abyss being created in real time. If these college-educated, most white, frequently hysterical females, are not stopped, it will be almost impossible to walk back the destruction they leave in their wake:

I was enjoying dinner with friends when this protest broke out. Watch it all. They ruined a perfect evening. My apologies for any profanity I let slip.

Right now, the only thing between America and the abyss is an overwhelming victory for Donald Trump and the Republicans. If Biden is elected, the Marxists behind Black Lives Matter, Defund the Police, the de-incarceration of prisons, the end of bail, and every other entropy causing initiative will be in the driver’s seat in America. People will be amazed, in a terrible way, about how fast the road is to becoming the Mogadishu of the northern hemisphere. The end will come only when true totalitarianism appears on the scene because the strength of totalitarianism is the only thing that will stop the violence — and so the American people, ultimately, will embrace the tyrant that comes to claim them.