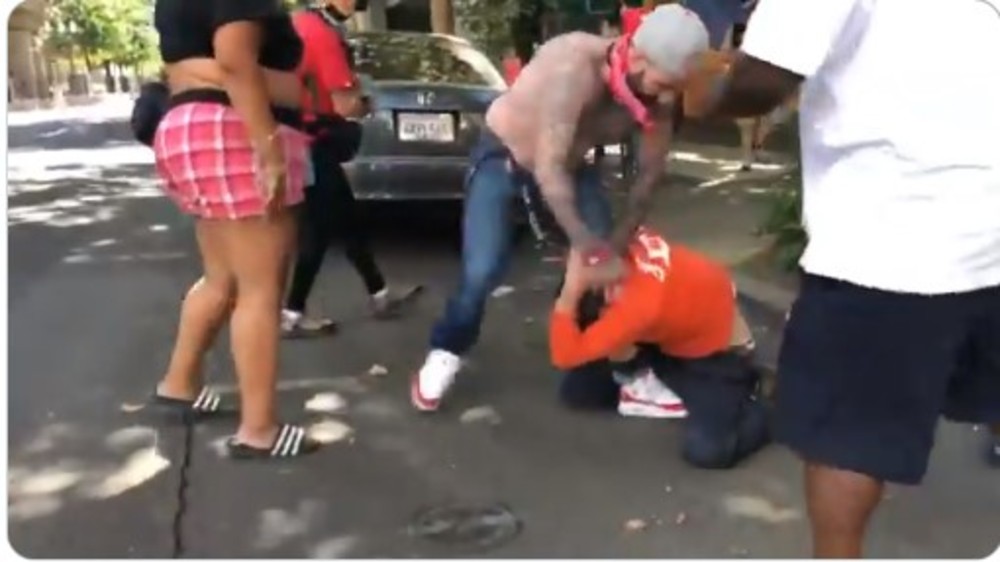 Looking at the WaPo’s gauzy view of Portland’s Antifa anarchists helps clarify that the American media are truly America’s enemies.

How wrong I was. That’s precisely what the WaPo is doing.

The WaPo article is entitled “Trump sent agents to quell unrest. But protest is what Portland does best.” Yes, it does rhyme. Somewhere, a second grader is thinking, “I could have done that too.”

Before getting to the article, let’s talk about the author, a young woman (and yes, I’m assuming her gender) named Marissa J. Lang. One of the things you need to know about her is that her journalism career started in San Francisco, where she worked for the San Francisco Chronicle (or, as I call it, the Comical). On her webpage, her resume says she began working at the Chron in 2015, before which she worked at the Sacramento Bee, the Salt Lake Tribune, and the Tampa Bay Times. I bet some of those were internships. I suspect she’s a pretty recent graduate (after 2010) of the University of Maryland, where she got a B.A. in Journalism.

Based on these assumptions, I’m willing to bet that I can assume a few other things about Lang. She’s never held a real job. That is, she may have worked in high school and college, but she doesn’t understand how a real business works. She’s always been a paycheck collector in a business that produces nothing but words. Also, if she’s a recent college grad — and one, moreover, in the journalism department — she’s been steeped in leftism since the day she entered college.

Okay, having aired all my assumptions about Lang, let’s get to her article, which is as awful as Ngo said it was. What Lang does is profile Antifa protesters. The article is a series of romanticized looks at a Portland person or family steeped in Democrat / leftist protest. Each little vignette is accompanied by two photos: The first shows the people profiled in their daily clothes. They’re not criminals. They’re people! The second shows them all dressed up to go fight “the man.”

Here are some examples of Lang’s passionate prose about these hip Antifa types:

Kia Rae’s first memories are strung-together scenes from a Jesse Jackson rally in 1988. The 34-year-old lifelong Oregonian remembers the smell of the fairgrounds, the current of waving signs, the colorful pins stuck to the chests of strangers.

Some parents take their children to sit in the stands of football games or baseball diamonds. The children of Portland come of age clapping to protest songs and stomping their feet to chants for justice and peace.

Toren, 65: “You know, Portlanders are very peaceful people. It’s not like we’re just misguided youth, which is what I think people are labeling the protesters. I’m a retired nurse with a really long career who just sees what’s happening is wrong.”

Mischa, 31: “I am protesting because it is unacceptable and wrong on so many levels to have a police force that the majority of citizens are afraid of. I am opposed to the existence of the police in their current form of a culturally corrupt, armed, cruel and tyrannical force that patrols the streets and instills fear into the people.”

But after the police killing of George Floyd in May, something shifted in this city where less than 3 percent of the population identifies as Black. [If only 3% of the population is black, Mischa (above) is exaggerating just a bit when he says “the majority of citizens” are afraid of the police.] While White residents largely tout liberal ideals of civil rights and equality, Oregon’s racist history looms large here, said Shirley Jackson, a sociology professor in the Black studies department at Portland State University.

In Portland, it’s not just the usual suspects who take to the streets. Moms in yellow shirts and bike helmets folded sunflowers into the iron fence around the federal courthouse. Teachers made signs likening Trump to tyrants and dictators of the past. Military veterans waved flags hung upside down to signal distress and strapped on gas masks and respirators to stare down the front line of federal troops.

And blah blah blah. The article goes on forever with these gauzy, saccharine looks at these sweet freedom fighters.

But let’s pull back from this close-up view. Let’s look at what these people do when they’re not gazing with doe eyes, or fierce eyes, at a journalist’s admiring camera lens:

Even during the day time, the area around the Portland federal courthouse is lawless as police are instructed to stay away. After BLM protesters harassed and assaulted those standing with flags, they beat up a man. Video by @livesmattershow: pic.twitter.com/8IGn0Z3P9E

Scenes of chaos in north Portland as #antifa rioters start fires all over. #PortlandRiots pic.twitter.com/K4yLQKs9a1

“We’re gonna burn your building down”

“We know where you live”

As #antifa have taken to Portland residential areas to riot, they’ve also assaulted & intimidated residents there. Tonight, they threatened those who looked out the window. #PortlandRiots pic.twitter.com/1qiIOLk99j

Overnight on 8–9 Aug, hundreds of antifa descended on the @PortlandPolice union building again in north Portland. They blocked the road, started street fires & tried to burn down the union hall again. Video from inside shows the arson attack #PortlandRiots https://t.co/WAvyCdYjVm pic.twitter.com/mpHi9fQAcr

Antifa slash the tires of a truck on the street where they are rioting. The driver drives off. They chase him down and smash up his vehicle. In June they did this to another driver during broad daylight in SE Portland. #PortlandRiots #antifa pic.twitter.com/VB2TGe5qLU

An older woman tried to stop #antifa rioters from continuing their attack on the Portland Police east precinct tonight. She stood in the front and they dumped some white liquid all over her & curse her out. #PortlandRiots pic.twitter.com/fYEu08DOfJ

Portland Police released video showing rioters using lasers to blind them before launching bottles, rocks & other weapons. This was recorded overnight on 5–6 June outside the Justice Center. #Antifa & others have tried for a week to break into the facility. #BlackLivesMatter pic.twitter.com/IjE9T0kZiJ

At least three federal officers in Portland may not recover their vision after rioters, who have shown up in mobs for more than 50 consecutive nights, shined powerful lasers in their eyes to blind them. #PortlandRiots #antifa https://t.co/9XDS3GMBDx

I feel like sitting all these people down and forcing them to ask themselves, “Are the baddies?” If you’re living in the least racist and one of the most free cities, not just in the world, but in history, it’s really evil for you to create strawmen enemies and then attack real people with staggering brutality. And for a paper like the Washington Post to buy into that evil delusion is worse. I mean, let Portland destroy itself, but the WaPo, because of its reach, has the potential to destroy America.

I am grateful that, outside of Democrat enclaves, most Americans, no matter their race, sex, sexual orientation, etc., seem to have a clearer view of what America is and who America’s police are. Our police are not the men who go into Hong Kong newspapers and arrest people for daring to criticize the government. Trump’s “war on the media” consists of calling them out on their lies. And except for the minute number of bad cops, our police forces’ “brutality” lies in arresting people for violating laws that exist in all civilized societies: Don’t assault people, don’t kill people, don’t rape people, don’t rob people, don’t break into people’s homes, don’t steal, and don’t destroy public property.

One of the great things about the Wuhan virus (yes, there are silver linings) is that it’s undermining two of America’s most pernicious institutions: Public schools under the guidance of teachers’ unions and the mainstream media which is hemorrhaging readers and viewers. Lang contributes nothing good to society. Instead, she takes local toxicity and smears it across America. It will be a good day when she no longer has a forum from which to spread her poison.