Republicans fly the American flag because they believe in what it stands for. Democrats reject both the principles and the flag.

Although I’ve been in my new house for some time, I finally got around to putting up my American flags today — a big one on the side of the house that most passers-by see and a small one on the opposite side where some people will see it. It was an unseemly delay, but there were some problems associated with actually affixing the flag.

What finally spurred me to work past the difficulties of hanging the flags was a meme that I put on the blog, a few weeks ago. You might recognize this one: 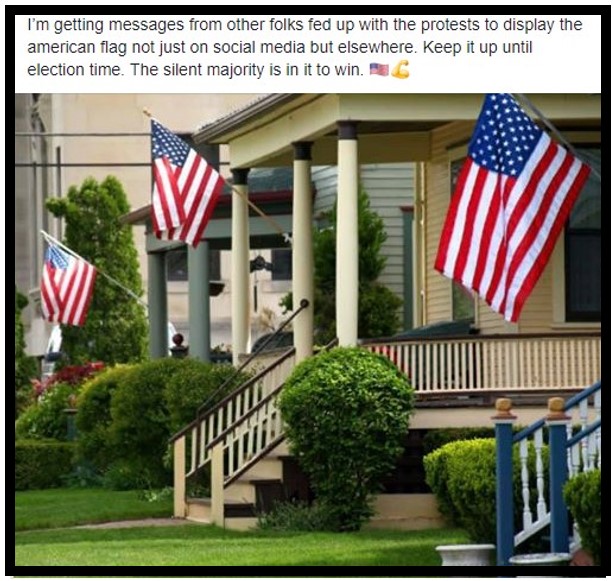 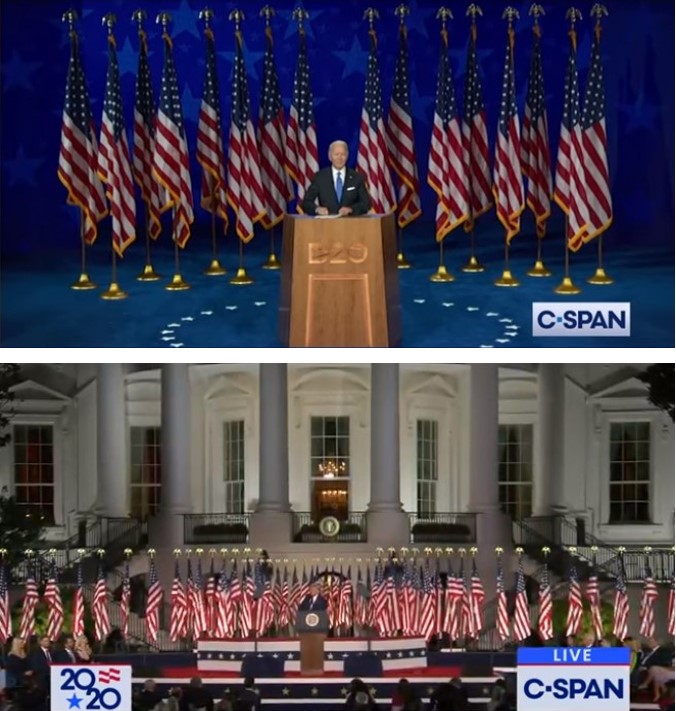 Indeed, when the camera pulled back on the president, there were even more flags: 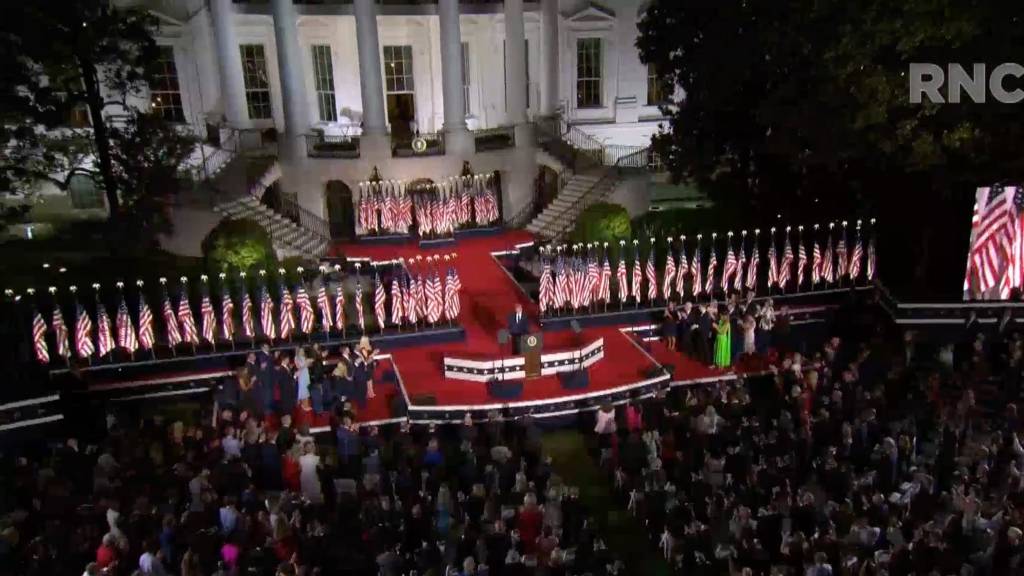 Yes, Biden has a display of flags behind him but the display behind Trump is bigger and brighter. I’m sure you also noticed that, at the Republican convention, all of the speakers who stood in the beautiful Andrew W. Mellon auditorium had a complete flag backdrop as they spoke:

The Democrat convention didn’t offer that kind of enthusiastic flag-waving. Part of that was because Democrats elected to have a Zoom convention, so most people were shown in their homes. I doubt even most Republicans have flags festooning the inside of their homes. However, the hosts — Julie Louis-Dreyfus and whats-her-name — could have had flags, but they didn’t. Instead, the Democrats opted to give them a stylish red, white, and blue set, sans flags: 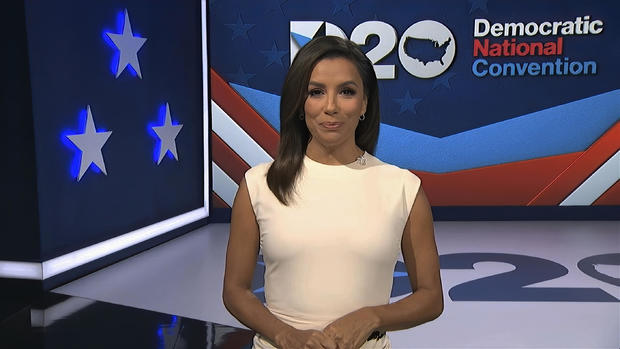 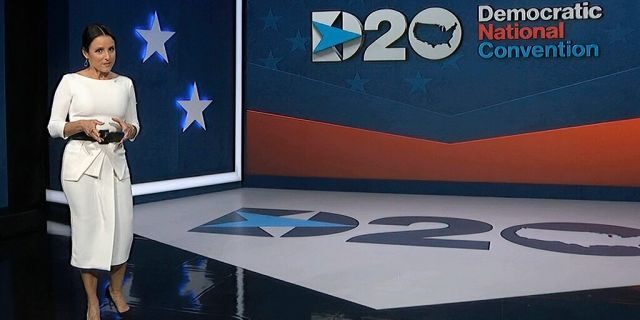 It’s not that Democrats don’t like flags. They adore flags. Oh, my Lord, the flags!

It started with the gay flag. Who can forget our gay flag White House? (Photo by Ted Eytan.) 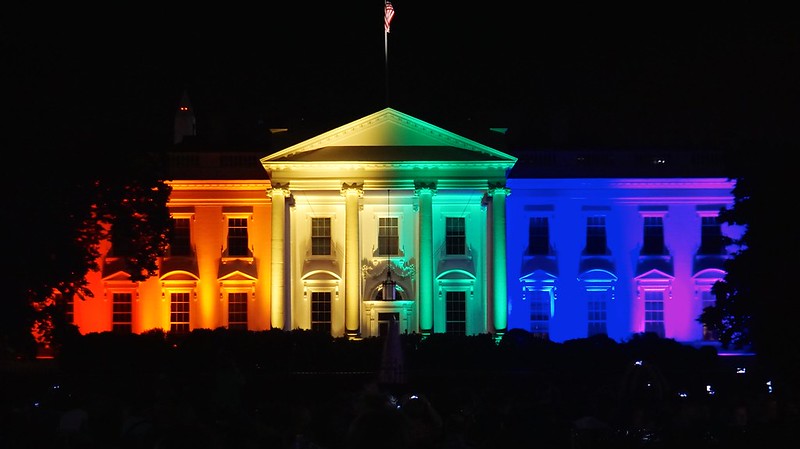 I’ve always resented the fact that this association with homosexuality denies the rainbow to the rest of us. If I put up a rainbow of any type, no one thinks, “Oh, a rainbow. How pretty.” Instead, everyone thinks, “She or someone very close to her is part of the LGBTQ+ spectrum.” I don’t say this to be homophobic. I don’t care if someone else is gay. I just care that, if I chose to display one of nature’s great miracles, others will think I am gay, when I am not.

The problem is that, once you start making flags to align with your personal situation, you begin to be dissatisfied with flags that don’t perfectly describe you. That’s how you end up with this obsession with drilling down into the minutiae of every person’s chosen lifestyle and self-identification: 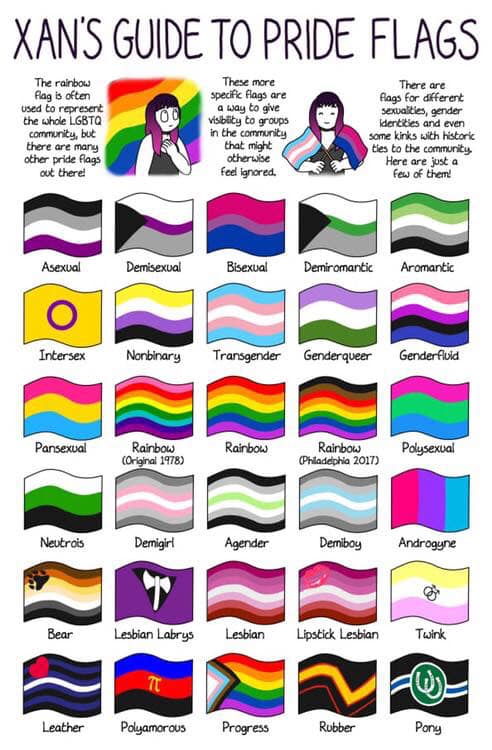 I first uploaded that photo last year. I’m wouldn’t be surprised to learn that a few flags have been added since then, necessitating a new, bigger chart.

The American flag, though, is not personal. It is, instead, a flag for everyone who believes in certain values that transcend any color, race, creed, sex, sexual orientation, country of origin, or any other mutable or immutable characteristics.

It stands for a belief that a creator made all of us, so that we are all equal before God (and, one hopes, before the law) regardless of our differences.

It stands for a belief that government exists to secure the rights that are inherent in all of us. Broadly speaking, those are the rights to life, liberty, and the pursuit of happiness.

More specifically, these are the rights detailed in the Bill of Rights: The right to free speech, to freedom to practice our faiths without interference, to peaceable assembly, to bear arms in a meaningful fashion (so no stupid tricks about leaving guns legal but making ammo illegal), in order that we can defend ourselves against all enemies to our life and liberty, to be free of any other person’s ownership, and so on and so on.

Our rights are so universal that people in faraway places who yearn for those rights feel a deep connection to us. We’ve seen that in Hong Kong where protesters trying to push back against the way China is illegally and immorally imposing its tyranny on Hong Kong’s citizens carry American flags to show what they treasure and do not what to lose. The flag is a symbol of individual liberty from a tyrannical government. That’s it in a nutshell

I wanted to comment, “Just take it. Nobody’s stopping you. It’s you Democrats who find the flag repugnant because you no longer believe in the values for which it stands. If you did, you’d be Republicans.” I’ll end this post with two videos, one of which is precisely on point, and the other of which suggests that the flag-carriers whine less and, I hope, will vote more than the people obsessing about micro-flags that perfectly define them:

Politicians, Corporations and Athletes continue to KNEEL. They would rather appease the Mob than stand up for our Great Country.

I promise you this: I will never kneel. I will STAND.

Wow. This was the line to get into the Trump Rally in Minden, Nevada today.