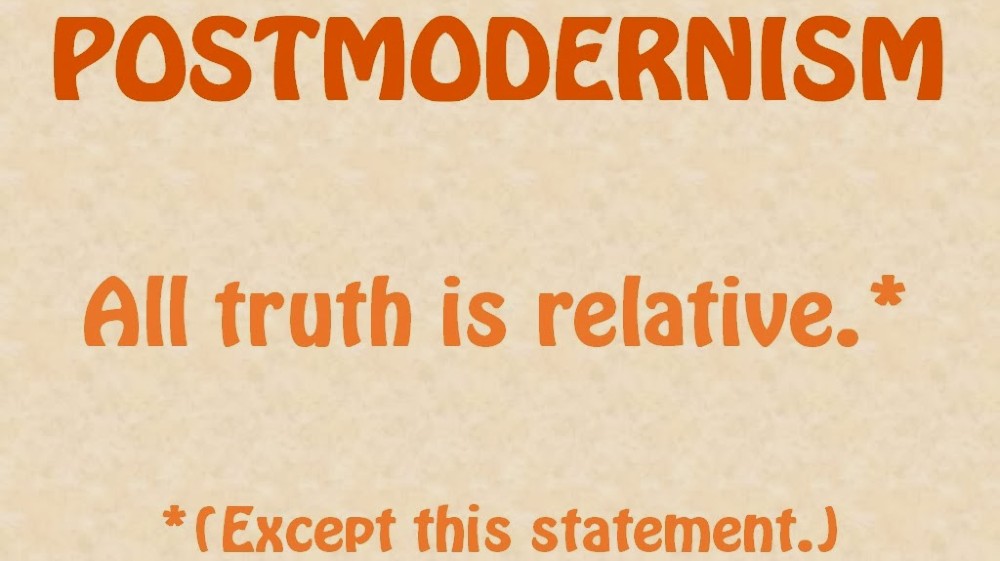 Postmodernism has meant decades teaching Americans there is no absolute truth — so why shouldn’t they believe the lies around this election?

A young friend of mine, a leftist and a “scientist,” insists that there’s absolutely nothing bizarre about the fact that, as of 3 a.m. in the contested states, the number of ballots for Trump dropped to zero. It’s just that after 3 a.m., he assures me, the states were counting mail-in ballots and it’s perfectly reasonable that 100% of them were for Biden.

He’s not alone. Other Democrats accept that checking voter identification is racist, while it’s not racist to ask for identification in every other area of life, whether boarding a plane, buying alcohol, going to a concert, or going to a Democrat political rally. They believe that, thanks to the Wuhan virus, voting in person will kill you, as will going to a restaurant after 10 p.m. in New York City, but that it’s perfectly safe to have mass rallies to protest the death of an ex-felon who overdosed on the streets or to celebrate the election of a senile old man who’s campaign appearances, in total, added up to about a week’s worth of time. That Trump had 52,000 at his Pennsylvania rally and Biden 12 means nothing, because all of Biden’s supporters, the same ones who turned out in the thousands on the streets on election night, were avoiding personal appearances because of the Wuhan virus.

Clearly, logic is in short supply on the left. But what I’m describing goes far beyond the fact that American education has completely abandoned teaching school children logic and reason. We’re seeing something much more serious here, which is that we’ve just had the first postmodernist election. However postmodernism is described (and you can find lots of definitions), its fundamental aspect is that there is no such thing as fixed, or absolute, truth.

Surprisingly, the most obvious way in which postmodernism has woven itself into society is with the phrase, “My truth.” It’s used politely. “Well, I know you say that Joe Biden digitally raped you, but my truth is that he would never do that.” Actually, the truth is something objective: Either Joe did or did not trap a young woman in a Senate basement hallway and digitally rape her. We may never have the facts to prove that truth one way or another, but there is a truth out there.

The lack of absolute truth also shows up with gender madness. We have raised a generation of young people who believe that there is no such thing as biological sex. Instead, there’s “gender, which is a social construct,” and which is separate entirely from those pesky absolutist chromosomes. In postmodernism, you can change your gender as often as you change your underwear and — and this is the really significant thing — everyone has to go along with you because it’s “your truth.”

Since the 1960s, increasing numbers of Amerian youth have been told the opposite of logic. They’ve been inculcated with feelings, not facts or evidence. This is why that arch-racist, Barack Obama, can tell the world that colorblind Americans elected Trump because they wanted to get a black man out of the White House. And you can’t argue, because that’s Obama’s truth and, because he’s black, his truth is truthier than your truth, you racist.

And that’s how leftists can  ignore the massive evidence of fraud in this election as meaningless. Statistical data showing the absolute unreality of alleged voting machines in Pennsylvania, Georgia, Michigan, and elsewhere, is irrelevant because it’s “your truth,” not the “Biden wins the election truth.”

Unfortunately for leftists — and an America under leftist control — the natural world (which Democrats purport to speak for) and the laws of physics do not operate on “your truth” or “my truth.” Instead, they have their own inexorable, unchangeable logic which will always Trump leftist fantasies. The same is true for the laws of economics. When governments manage the marketplace, people eventually starve or freeze, or perhaps bake or get overrun and slaughtered.

It always ends in death, because death is inexorable — and, of course, death cares only about its own truth.