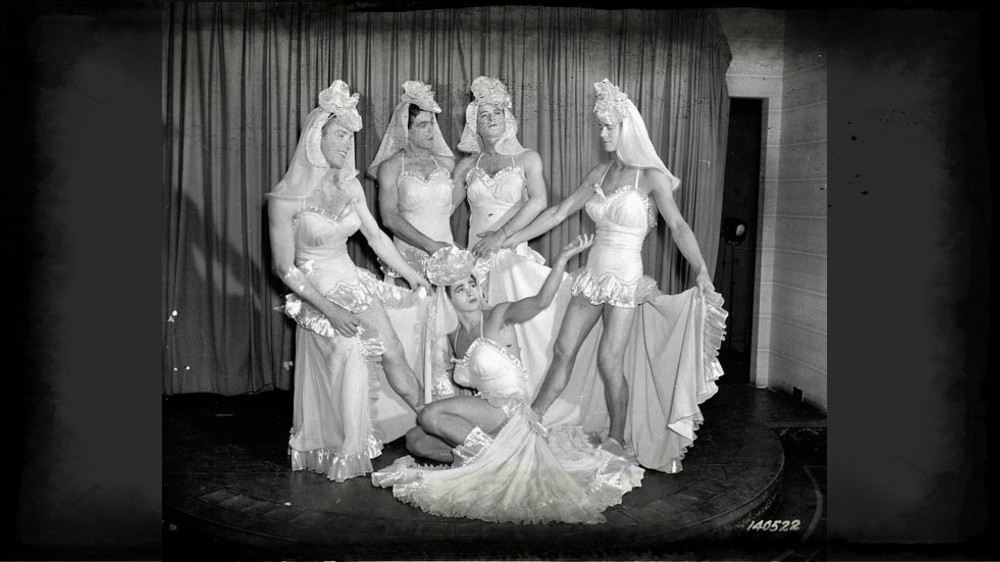 The left’s effort to get men into women’s clothes (à la Harry Styles) is not just about gender; it’s also about stifling male maturity.

Long ago, I had a friend who inadvertently married a heterosexual cross-dresser. She also found she’d married a man who couldn’t hold down a job, preferred playing over working to such an extent he wouldn’t work and never saved, and didn’t want children. When she went to a therapist to deal with the shock of seeing her husband in a prom dress, the psychiatrist told her that the prom dress and the immaturity were a package deal.

Cross-dressing men, the psychiatrist said, were men with arrested development. Their fixation on seeing themselves in women’s clothes showed that they were stuck in an immature phase, one that exists normally before men fully developed their male identification (something that happens at puberty). That same immaturity showed itself in her husband’s failure to take on the mature, manly responsibilities of work and family. In other words, she’d married Peter Pan, and playing dress-up was just one manifestation of that. As you can imagine, it was a short-lived marriage.

I thought of my friend’s dismal experience when I saw Vogue’s tweets trumpeting Harry Styles in a series of designer dresses:

“There’s so much joy to be had in playing with clothes. I’ve never thought too much about what it means—it just becomes this extended part of creating something.”: Read our full December cover story starring @Harry_Styles here: https://t.co/OemyoTlx5G pic.twitter.com/xhlvJJ03cF

Dressing up, making music, living in the moment: This is what matters to @harry_styles. Boundaries and labels? Not so much. Read the full December cover story: https://t.co/sIslUuY0ZS pic.twitter.com/GdzmCNySLH

Candace Owens immediate zeroed in on the left’s ongoing attacks on masculinity:

There is no society that can survive without strong men. The East knows this. In the west, the steady feminization of our men at the same time that Marxism is being taught to our children is not a coincidence.
It is an outright attack.

Since I’m trending I’d like to clarify what I meant when I said “bring back manly men”.

I meant: Bring back manly men.

Owens is correct. But I think one can dig deeper. This attack on masculinity is also an attack on maturity. I say this because that psychiatrist was right. He was offering this opinion in the San Francisco Bay Area in the late 1970s/early 1980s. That was a window of time and a geographic place when psychiatrists no longer thought of homosexuals as deviants who needed to be “fixed.” Nevertheless, in that pre-politically correct, virtue signaling, victim-centric, LGBTQ-manic era, psychiatrists were still willing to explore the emotional roots behind men dressing as women, wanting to be women, or thinking they were women. And back then, at least as far as that psychiatrist was concerned, cross-dressing was a clear indicator of Peter Pan syndrome in men.

But back in the real world, most of the time, little girls model on Mommy and their female peers, while little boys model on Daddy and their male peers. However, as I said, kids go through stages, especially when the dress-up clothes come out of the closet. That’s when kids can try on Mommy’s and Daddy’s clothes to see what looks right. If there’s no Daddy in the picture, all the dress-up revolves around Mommy’s clothes.

Kids also want to emulate characters in movies. When a three-year-old girl and a three-year-old boy first see Disney’s Cinderella, each may want a princess dress. Once upon a time, traditional families would have told the boy, “No, but you can have a Lone Ranger or Davy Crockett outfit.” Nowadays, properly progressive parents give both their daughters and their sons a princess dress.

What I always think is funny about little girls in those cheap princess costumes is the knowledge that, when they see themselves in the mirror, they genuinely believe that their shapeless little-girl bodies look exactly like Cinderella’s curvy adult body. In reality, while the little girl will always be as pretty as a picture, there is no comparison: 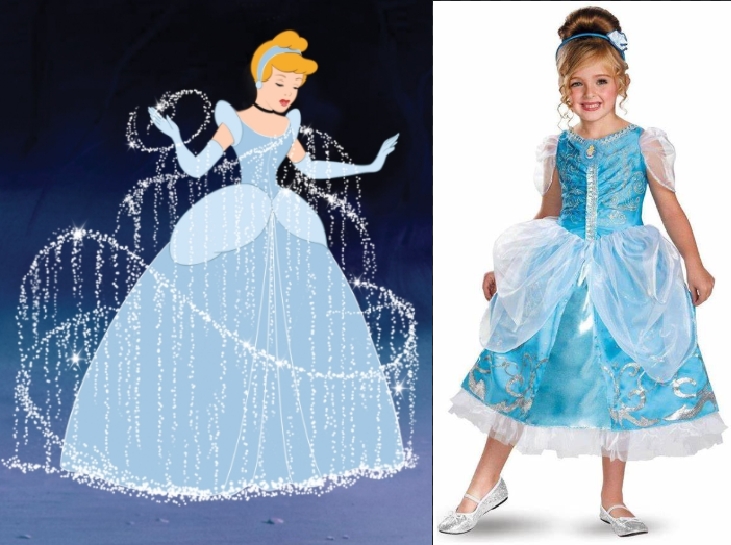 However, little girls do have an inner knowledge: One day they will have those curves. Their chest and hips will fill out and their waist will curve in. Their dressing-up is a preparation for those days. And as they grow older, that image always lingers in the back of their mind.)

Little boys, however, should reach a point at which they realize they will never have Cinderella’s curves. If they are maturing appropriately, they will accept that their physical future is a different one.

Some may say that men in mid-18th century France (and at the highest echeolons of England) wore bright colors, feathers, make-up, etc.

This is true, but there are a few points to be made. First, we’re talking France, for Gawd’s sake.

Second, the men who wore those fashions ended up fleeing France, in prison, or losing their heads to Madam Guillotine. In other words, those male excesses did not end well.

Third, the trend for heavy make-up coincided with smallpox sweeping through Europe. The make-up helped hide scars that were infinitely wore even than acne scars. As variolation and vaccination took hold in the West, make-up for men vanished.

And fourth, even though the men were dressing up like gaudy parrots, they were not aping women’s fashions. The women were showing their breasts, and accentuating their waists and hips. After all, as the French said vive la différence!

When the industrial revolution came along, complete with a middle-class culture of male maturity (holding a job, innovating, taking risks, etc.), men started wearing the clothes most Americans grew up seeing: Sturdy, sensible, accentuating masculine traits (strength, breadth, solidity). Sure, some men were peacocks, but the great middle were not: 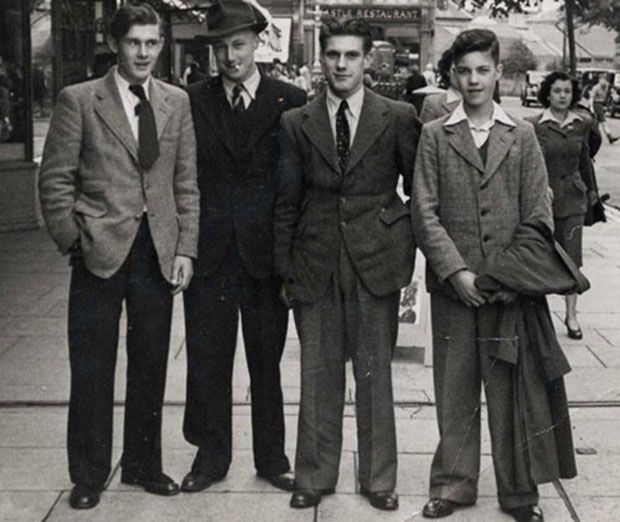 With that in mind, look again at this picture of Harry Styles:

He’s got no cleavage, no bosom, no waist, and no hips. He is pure arrested development — the three year old boy who, unaware of biological realities, still thinks he can grow up to be Cinderella.

It ain’t happening, Harry. You don’t look feminine because you’re not female. You just look like my friend’s husband: An overgrown boy, delusionally thinking that someday, when he grows up, he too will look like Cinderella.

My point in saying all this isn’t to contradict Candace Owens. She’s correct that leftists desperately want to undermine traditional masculinity, with all of it’s toxic white male associations: Ambition, fidelity, courage, energy, and aggression (which can be channeled for good and evil).

However, by encouraging men to live in the three-year-old land of make believe about one day growing up to fill out those princess clothes the correct way, leftists are also undermining traditional hallmarks of maturity: Being reliable, responsible, and accountable. Being willing to defer current pleasure for future advantages. Taking on the responsibility of raising children.

That’s precisely where the left wants our culture to go. Fight back. Be a man and skip the dresses (at least in public).

Image: The picture is a still from the stage version of Irving Berlin’s All-Army review show, This Is The Army. Going back to the Ancients in Greece and Rome, when women could not perform on stage, men took on the role. That does not mean that society encouraged men as a whole to abandon masculinity or embrace immaturity offstage.