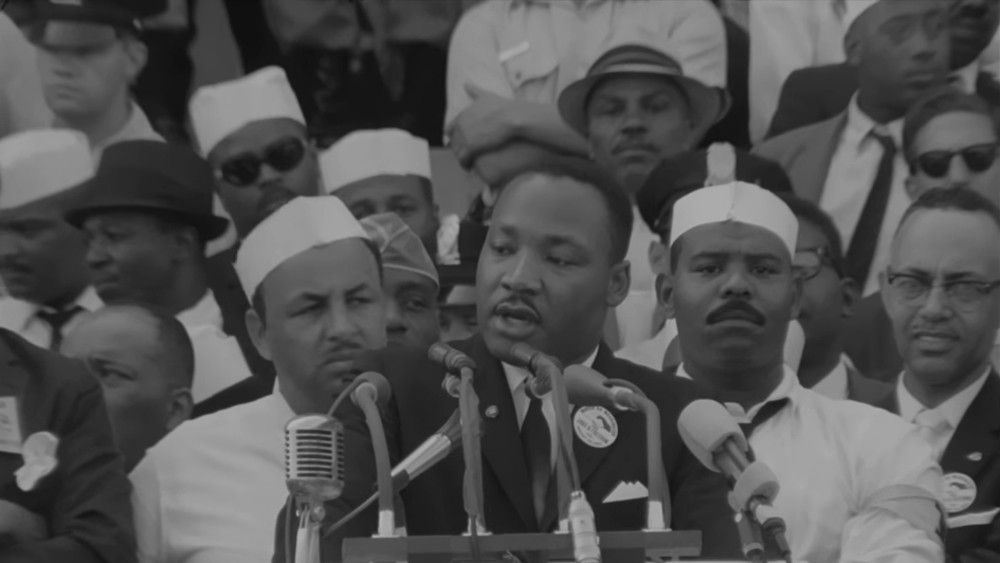 Martin Luther King’s goal, a colorblind society where “all men are created equal,” has never seemed so far away.

The third Monday in January is annually set aside to honor the most towering figure of our nation’s civil rights movement, who gave his most eloquent speech in 1963 — I Have A Dream. That speech was a stirring call for true equality. After opening by noting the promise of our nation, that “all men are created equal,” near his conclusion, he said: “I have a dream that my four little children will one day live in a nation where they will not be judged by the color of their skin but by the content of their character.”

The full speech is in the video below. Do watch it. His moving appeal to equality as the basis for our nation rings as true today as in 1963.

As Stephen Green at PJM states:

[Y] ou must have at least one woke family member, friend, coworker, or acquaintance who would denounce this speech for white supremacy if they read an anonymous transcript of it rather than watch King’s unparalleled delivery.

As Bob Woodson, a contemporary of MLK Jr. and a member of the movement wrote recently at WSJ:

King paid a heavy personal price for his hope that America was redeemable. Twice his home was bombed; once, his wife and daughter were nearly killed. Surrounded by hundreds of angry, armed black men after that bombing, he discouraged retaliatory violence. He was assaulted several times, and jailed as well, but he remained steadfast in his commitment to nonviolence. He united black Americans behind the proposition that racism is evil in itself, not simply because white people visited it upon blacks, and that all must unite to combat evil. He warned us about the self-destructive path of violence, not only for blacks but for the whole nation. . . .

While MLK’s movement succeeded in mainstream America over the next four decades, and our nation moved ever closer to a unified and color-blind society, the Marxists, almost wholly inhabiting academia and infecting graduates with the toxins of post-modernism and critical race theory, fundamentally reworked the civil rights movement.  The movement’s goal was no longer equality; it became “social justice,” a term concerning collective guilt and collective justice of tribes, with that justice to be defined and administered by our Marxist left on an ad hoc basis.

The movement’s goal was no longer a unified society. On the contrary, the movement has come to explicitly embrace a sharply divided tribalism.  Ultimately, this was not about creating a society that worked for the betterment of all Americans; it was about the progressive Marxist scum gaining raw political power under the guise of a deeply distorted and abominable definition of “fairness.”  Again to quote from Bob Woodson at WSJ:

Today many black leaders defer to angry white progressives who make . . . arguments about blacks’ lack of moral agency, reject the country’s founding principles, and seek to undermine its institutions. For months, the radical left has been exploiting the country’s genuine concern for fairness to keep blacks in a constant state of agitation, anger and grievance, urging them toward behavior that lives down to the slanderous stereotypes of white supremacists. The leaders of these movements insist that every inequity suffered by blacks is caused by institutional and structural racism, that they have no power to liberate themselves, and that they will remain oppressed until white people change. Even to raise the issue of what role self-determination plays for blacks earns you the label of “racist.”

Civil-rights organizations and their leadership, as well as the Congressional Black Caucus, need to wake up before it’s too late. A faction of black leaders has been silent about, or complicit in, the takeover of the civil-rights movement by the radical left. The effect of this is not to glorify black achievement but to crucify low-income blacks, who are represented in national media outlets by their worst-behaved members, and bear the brunt of the attacks by the woke radical left on the cities where they live.

“Justice” for black America cannot be achieved by framing it solely through the distorted lens of the deaths of George Floyd, Breonna Taylor and others in fatal police encounters. For every unarmed black American killed by the police, hundreds are killed in neighborhood homicides.

That we are on the precipice of a second civil war over this is hardly a surprise.  On MLK Day in 2008, I wrote I wrote a post on race in America, surveying our history and pointing out the far left’s bastardization of MLK’s dream of equality for all. It is appropriate to revisit that post today. I predicted at the time that, with Obama’s election, we would fall deeper, and perhaps irrevocably, into identity politics and multiculturalism, moving ever farther away from realizing MLK’s goal of equality.  I could not have been more prescient.  To quote from that post:

Liberal African American NYT columnist Bob Herbert recently had this to say in extolling the virtues of the left:

Without the many great and noble deeds of liberals over the past six or seven decades, America would hardly be recognizable to today’s young people. Liberals (including liberal Republicans, who have since been mostly drummed out of the party) ended legalized racial segregation and gender discrimination.

Mr. Herbert pretty much sums up what has been the far left / liberal / progressive line for decades. But then how to explain all the vicious, ad hominem and unhinged Palin-bashing coming from the left? To take it one further, how to reconcile that Palin-bashing with the left’s acceptance of people like Rev. Jeremiah Wright as a part of their stable? It seems quite the conundrum unless one knows a bit of history and can identify the massive deceits. Here are some facts, some of which you might not be aware:

Nothing that I say here is to suggest that racism and sexism could not be found in the Republican party or among conservatives at any point in American history. But if you take any period in history and draw a line at the midpoint of racist and sexist attitudes, you would find far more Republicans than Democrats on the lesser side of that line. And you would find a much greater willingness on the part of Republicans, relative to the time, to effectuate equality. That was as true in 1865 as in 1965 – and in 2008.

The far left fundamentally altered the nature of the Civil Rights movement when they claimed it as their own. They imprinted the movement with identity politics, grossly distorting the movement’s goal of a level playing field for all Americans and creating in its stead a Marxist world of permanent victimized classes entitled to special treatment. The far left has been the driver of reverse racism and sexism for the past half century. That is why it is no surprise that, with the emergence of a far left candidate for the highest office in the nation, Rev. Jeremiah Wright should also arise at his side and into the public eye preaching a vile racism and separatism most Americans thought long dead in this country. Nor is it any surprise that the MSM, many of whom are of the far left, should collectively yawn at Obama’s twenty year association with Wright. Wright is anything but an anomaly. To the contrary, he is a progeny of the politics of the far left.

The far left did not merely hijack the civil rights movement, they also wrote over a century of American history, turning it on its head. That is why Bob Herbert, quoted above, is able to wax so eloquently while spouting the most horrendous of deceits. The far left managed to paint the conservative movement and the Republican Party as the prime repositories of racism and sexism. The far left has long held themselves out as the true party of equality. They have done so falsely as, by its very nature, identity politics cements inequality. Beyond that truism, the far left has for decades played the race and gender cards to counter any criticism of their policies, to forestall any reasoned debate and to demonize those who stand opposed to them. They continue to do so through this very day.

For example, Obama has attempted repeatedly to play the race card so as to delegitimize criticism of his policies . . .

We are either a melting pot wherein “all men are created equal” – the ideal of our Founders for which we have long laboured and are ever closer to succeeding – or we are to become a multicultural nation of pigeon-holed special interests. We are to become a nation where groups are encouraged to remain apart, defining themselves by their victim class before defining themselves as Americans. Multiculturalism is unworkable – we can see it destroying Europe and Britain – but that has not stopped the far left in America from their embrace of the concept. Nor has it slowed their efforts to weave multiculturalism irrevocably into the fabric of our society. . .

It is inevitable that one of the two concepts . . .  – a melting pot of equals or a multicultural morass of victim groups – will gain ascendance in America. I have long felt that we are at a crossroads in our nation for precisely this reason, and that the ramifications of how we decide this issue will be existential. . . .

I could not have been more prescient.

All hope is not lost, however.  The Babylon Bee can see the dark humor of the situation: