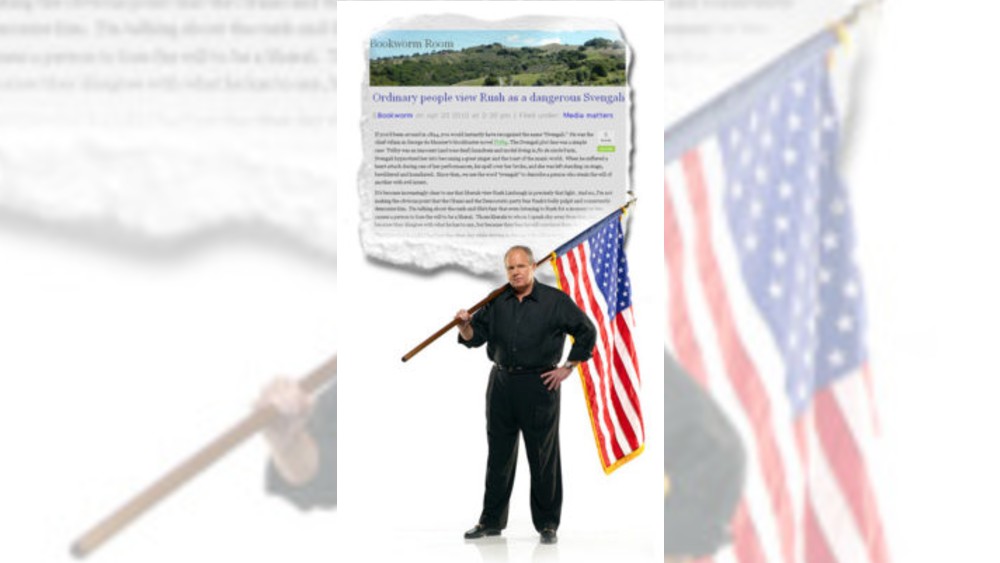 Rush Limbaugh passed away today. His death was not a surprise, for he spent more than a year fighting hard against the lung cancer that finally claimed him.

Rush was a great man, one who had an extraordinary understanding of life, values, political systems, and both the evil and the goodness that lives within people. He had the even more extraordinary knack of being able to articulate his knowledge — day in and day out, three hours a day, for decades — in a way that was never condescending but was always clear and interesting. We shall not look upon his like again.

In 2010, I wrote about Rush Limbaugh’s extraordinary powers. To my great surprise and everlasting honor, he read that post on the air. It seems worth reprinting it today for my sentiments about the man have never changed:

If you’d been around in 1894, you would instantly have recognized the name “Svengali.”  He was the chief villain in George du Maurier’s blockbuster novel Trilby. The Svengali plot-line was a simple one:  Trilby was an innocent (and tone-deaf) laundress and model living in fin de siecle Paris.  Svengali hypnotized her into bec0ming a great singer and the toast of the music world.  When he suffered a heart attack during one of her performances, his spell over her broke, and she was left standing on stage, bewildered and humiliated.  Since then, we use the word “svengali” to describe a person who steals the will of another with evil intent.

It’s become increasingly clear to me that liberals view Rush Limbaugh in precisely that light.  And no, I’m not making the obvious point that the Obama coterie and the Democratic party fear Rush’s bully pulpit and consistently demonize him.  I’m talking about the rank-and-file’s fear that even listening to Rush for a moment or two causes a person to lose the will to be a liberal.  Those liberals to whom I speak shy away from him, not because they disagree with what he has to say, but because they fear he will convince them that he’s right.

The following is a talk I had just the other day while driving in the car with a liberal friend who, having voted for Obama, is now deeply regretting that decision:

Me:  How would you like to do something completely different?  Let me put Rush on the radio.

Me:  Come on, you’ll like him.  He’s not at all the way you’ve heard him described in the other media.  He’s very well-informed, quite funny, and amazingly prescient.

So here we have a woman who realizes that she made a mistake voting Democrat this election, who is open to conservative news (I believe her when she says she watches Fox), yet who assiduously avoids any contact with Rush.  Incidentally, this was not a one time-0nly conversation.  I had virtually the same conversation with two other regret-filled liberals.

The belligerently liberal ones are equally averse to exposing themselves to Rush.

Me:  I challenge you to listen to Rush for a half hour.

Me:  Have you ever listened to him?

Me:  Then how do you know he’s an idiot?

Him:  Are you trying to make me mad?

Me:  No.  But I do think that you should listen to him.  At least then you’d have first hand knowledge of what he says and whether you agree or disagree with it.

Him:  I’m not going to waste my time.

And so on, ad infinitum and definitely ad nauseum.

During the 1990s, when I was an unthinking liberal, I knew Rush was out there, but he existed on the periphery of my existence.  I read Al Franken’s Rush Limbaugh is a Big Fat Idiot and laughed at how “stupid” Rush was, but I actually didn’t care about any of the core issues at stake.  I had no interest whatsoever in finding out what Rush was like because nothing he said really mattered.  I was working hard at my career, getting married, starting a family, and was therefore disinterested in things political.  The world seemed to be rolling along just right, with a Democratic president and a booming economy.

To give myself some retroactive credit, though, if a conservative had challenged me back then to listen to Rush, I would have done so — because I would have been certain that Rush was a big joke, and that I could have laughed at him just as Franken did.  I might have expected to be bored or offended, but I wouldn’t have been worried about being mesmerized and brainwashed.

And then came September 11, 2001, and I started paying attention.  I began to be concerned about what was going on around me.  This concern led me to start reading anything I could get my hands on about all sorts of subjects.  I read blogs, both liberal and conservative.  I opened my mind to the possibility that my attachment to the Democratic party was wrong — a possibility helped by the fact that I found myself agreeing with the major political decisions George Bush was making, both regarding national security and the economy.  In other words, once I realized that my old political staples were failing, I started looking for new information.  I wasn’t scared of the new information but, rather, was curious.

Both my old attitude (“Sure, bring silly Rush on, ’cause he’ll be good for a laugh”) and my new attitude (“There’s something out there I need to learn about”) make it impossible for me to understand the resistance, shading into fear, that my friends and family show when confronted with the possibility that they might hear a minute or two of Rush’s mellifluous tones over the airways.  They don’t seem to recognize either the possibility that they might laugh at a fool or learn from a wise man.  Instead, they seem genuinely afraid that any exposure to Rush will corrupt them irreparably.  Like poor Trilby, they’ll be seduced into an unsustainable way of being, only to find themselves suddenly abandoned and exposed.  To them, Rush is no mere conservative; he is Satan incarnate, a tempter who will destroy their liberal souls and leave them in an endless conservative Hell.

It’s quite a high compliment to Rush that ordinary liberals believe he has extraordinary powers.  It isn’t every conservative radio or talk show host who is perceived as so compelling and seductive that he can destroy people’s worldview in an instant.

It’s also very frustrating to me because, in a funny way, I agree with my liberal friends that Rush can rejigger their worldview very quickly.  The only thing is that I don’t believe Rush works his magic through hypnotism and trickery.  Instead, I think Rush’s real magic lies in his ability to view the political world as a vast chessboard, one on which he can see multiple future moves; his prodigious memory; his well-informed mind; his logical analyses; and his funny persona.  He convinces by appealing to our rational mind, our sense of humor, and our knowledge of the world as it is, and not as some Ivory Tower liberal tells us it should be.

So, whether by cajolery or challenge, I’m still trying to get my liberals to listen to Rush.  For all the wrong reasons, they’re right about one thing:  he will change their minds.