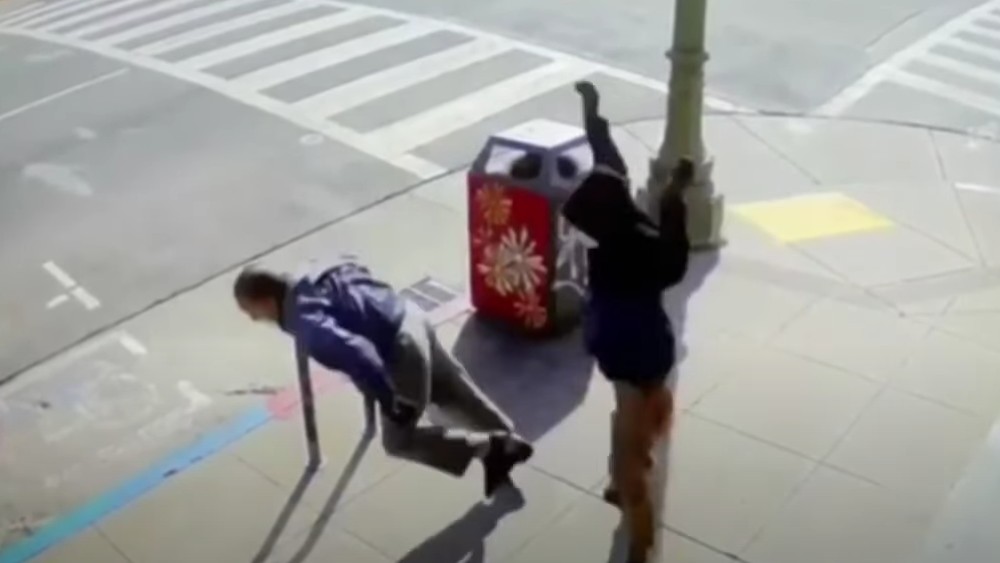 Here’s the reality behind the Democrat lie that Trump has caused black-on-Asian violence.

You probably know that there’s been an uptick in random, clearly race-related attacks against Asians. I’m under the impression that all, or most, of the attackers are black. Here’s a representative story:

The claim is that this is all Trump’s fault because he insisted on saying that the Wuhan flu originated in Wuhan, China. He also made it clear that he thought that the Chinese government, even if it didn’t create the virus in a lab or lose control of it, nevertheless deliberately lied about it and sent its citizens abroad to spread COVID. By saying such things, assert leftists, Trump turned Asian people into targets.

Let me restate that fine argument: The black people who presumably hate Trump (because of the media’s and Biden’s Fine People Hoax), nevertheless believed Trump implicitly about China’s responsibility for the virus. Then, despite Trump never having said a word about Asian people in America or in any way encouraging violence against them, these Trump-hating blacks took it upon themselves to get revenge against China by pushing over elderly Chinese people.

The media clearly think black people are idiots. Or they think Americans generally are idiots to believe that story. The fact is that it’s the leftist Americans (Democrats, progressives, socialists, etc.) who are that stupid if they believe this kind of media crap.

Allow me to tell you what’s really going on here: Blacks dislike Asians because they resent them. Incidentally, Asian immigrants, being incredibly racist in their home countries, despise blacks, whom they view as an inferior race. This Chinese commercial is Exhibit 1:

You can find Exhibits 2 through infinity across all of Asia if you spend just a few minutes looking. When I was growing up, the Chinese-born parents of my friends, all of whom liked me, nevertheless made it clear that their child’s friendship with a white kid was permissible only because, with the girls, these were obviously mere friendships while, with the boys, they were obviously nothing more than friendships. Nothing would have enraged them more than if I’d been dating one of their sons.

But this post isn’t about Asian immigrants looking down on blacks or whites. It’s about why blacks dislike Asians: It’s because Asians show that the black problem isn’t slavery; it’s culture.

Starting in the 1970s, Chinese immigrants began to pour into America. Coming from a communist country they had nothing. They didn’t speak the language (or anything related to the language) and they had no real marketable Western skills. They squeezed multiple families into cramped slum apartments and took whatever hard, dirty work came their way.

After doing well in K-12, they went to state colleges and universities or, if they were super smart and very lucky, got scholarships to prestigious colleges and universities. They worked hard in higher education, aced their classes, got great jobs, and bought houses in the suburbs where they moved their hardworking parents and grandparents. They were model minorities: Minimal crime, incredible academic performances, good jobs, increased affluence.

Things are different among blacks. Ever since the Civil Rights Movement, blacks have sneered at academia. If you want the details, read John McWhorter’s Losing the Race: Self-Sabotage in Black America. In it, he details a culture in which doing well in school and staying out of trouble is “acting white” and a bad thing.

This is the mindset BLM advances: doing math, being ambitious and punctual, working hard, being respectful — those are all signs of white, cultural imperialism being used against blacks. The fact that blacks could do those very things themselves and succeed is irrelevant. What matters is that across the activist black world, in the schools among the kids, and in the streets among the gangs, the message is relentless: Hard work and other behaviors that lead to academic and professional success are the internalized self-loathing that comes from systemic white racism.

Put another way, the message that is now writ large across America thanks to BLM is that black failure is white people’s fault because white people put unreasonable demands on blacks. We’re told that, because of the dislocation of the slavery that ended 160 years ago, and because of the genuinely systemic racism of the Jim Crow era (which only a small proportion of people still experienced) , blacks can’t be expected to perform up to white standards. Only a racist would expect that.

But then you have these Asian people, tiny, speaking a foreign language, navigating a completely alien culture, often living in the same slums as the black people — and damn their hides, they’re mastering the system. Their kids do great in school and the families amass wealth. It proves that, no matter the grim circumstances in people’s backgrounds, through those despicable “white” attributes (hard work in school and out), they can succeed.

In the last 30 years or so, the successful Far Eastern Asians (mostly Chinese and Korean) have been joined by the South Eastern Asians from the Indian subcontinent, who are, on average, the highest-earning people in America. Their culture also puts enormous stress on academic achievement and it pays off.

I’ll share a little racist secret with you: I think blacks are every bit as capable as whites or Asians, or pinks or greens, for that matter. There is nothing inherently wrong with blacks. Genetically, they’re people who live on a bell curve like everyone else, with a broad spread of physical and mental talents.

What’s wrong with blacks is that, since the 1960s, they’ve allowed white Democrats to impose upon them a culture of failure and to convince them that this is their natural, inherent black culture. When they see Asians arrive without even the advantage of speaking English and then do well, it infuriates them. Rather than confronting their Democrat puppet masters about the racist lie being used against them, they take out their rage on the nearest convenient objects. These “objects” happen to be fragile, elderly Asian people, whom they smash to the curb as the only way they can think of to lash out at an unjust system.

These frustrated blacks, trapped in a cycle of poverty and crime, are right that the system is unjust but that injustice isn’t because of those innocent Asian victims. It’s unjust because white elites in the Democrat party and their black kapo enforcers in BLM and the race hustlers in the media are running an ugly, obscene con job on blacks to keep them in a perpetual state of servitude. The goal is to ensure that Democrats can rely on black’s loyal votes in perpetuity.

And the really big Democrat joke on the blacks is that, having attained total federal power, the first thing the Dems are doing is opening the border and giving citizenship to 30 million illegal Latin Americans. These are the people who compete with poor blacks for jobs and housing, and who will make black votes irrelevant. The Democrats will have all the votes they need from the new Hispanic population.

Democrat efforts to use and abuse blacks ended with slavery and Jim Crow. However, they eventually figured out that they could control blacks completely with a vicious, destructive simulacrum of kindness that would destroy them, turning generations of young blacks into mindless people committed to violence and dependent on the government. And once these grievously manipulated people had fulfilled their Helter Skelter purpose of destroying America’s successful economic, social, and political culture, the ruling class could abandon them in favor of the easier-to-manage Latin Americans, who haven’t yet learned to bridle at doing menial labor for the Nancy Pelosis and Joe Bidens of this world.

But back to the Asians, there is something that might console these blacks who are brainwashed enough to think that it’s the Asians, not the Democrats, who are their enemies. Asians invariably send their kids to college. In the last 20 years, colleges have become so wacked-out with Wokeness and identity-politics, that their children are getting deeply propagandized, just as surely as blacks have been.

Asian children, instead of feeling superior and accomplished, are being taught that they’re victims. And once they learn that, they’ll fail too, just like all the other identity groups the Democrats demean and exploit.

And that’s why there’s an uptick in black violence against elderly Asian people.