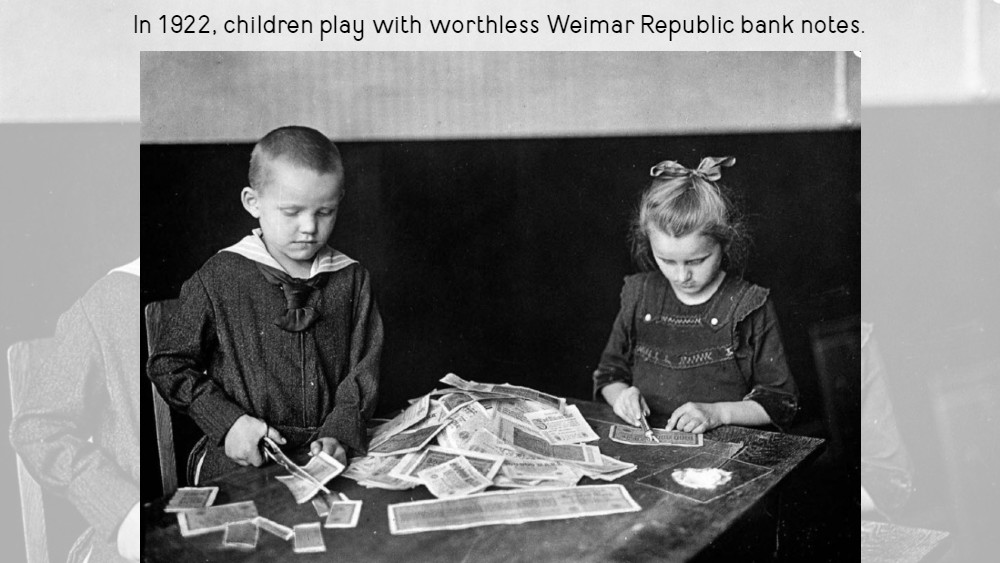 The Biden administration’s use of Modern Monetary Theory to create intentional inflation is a form of extreme taxation without representation.

If you ask for the fancy definition, this is what you’ll see when you look up Modern Monetary Theory (MMT):

MMT’s main tenets are that a government that issues its own fiat money:

Take away the high-flown language and here’s what MMT really says: Money is essentially an illusion. As long as the government controls the printing presses and is the world’s reserve currency, it can print as much money as it needs to fund current projects and pay down debt.

This is utter nonsense. Money is not an illusion. It’s an easy-to-use, fungible representation of a nation’s wealth. In the really old days, pre-money, goods and services were used in trade. We all remember Jack trading his cow for beans, right? That’s how the marketplace worked back in the day. Farmer Jones would have grain but need pigs, and Farmer Smith would have pigs but need grain.

The two farmers would enter into a straightforward deal that was actually fraught with complications. Both pigs and grain are difficult to transport to market. Also, the grain that Farmer Jones had available might be worth only three-and-a-half pigs. Would that require slaughtering a pig? Would Farmer Smith get less grain than he needed? Or would Farmer Smith give up a whole pig, grossly overpaying for the grain.

Also, in times of war (which was a chronic condition in the distant past), it was easy for marauding soldiers to find and confiscate your wealth. You can bury coins in the garden; you can’t do that with pigs or wheat.

Very early in human development, people figured out that they could use representations of their wealth to facilitate trade. The important thing about this early representational unit was that it had intrinsic value, so it had to be either scarce or unique. If it’s something common — e.g., pebbles —  it would be meaningless as a way to ascertain the value of goods and services in trade. Everybody would just fill their pockets with rocks and try to buy things from people whose pockets were equally full.

Enter precious metals: Gold was rare enough that it had intrinsic value. Silver and copper did too. People could easily carry a little chunk of gold or silver. In addition, both metals could be split. It’s easier to split a chunk of gold during a transaction than to cut the pig in half.

The problem, though, was that people had different ideas about the value of a given piece of metal. They realized that the best way to determine the value of money (which, again, has representational, not intrinsic, value) was to have a centralized place that pressed the metal into recognizable shapes with a stable value.

We know that, by the 8th century BC, Greece had figured out the idea of a standardized coin. The government’s imprimatur on a coin was an assurance that the money people were handling was a legitimate precious metal with a standardized value. (If you’ve ever wondered by the ridges along the edges of our dimes and quarters, they’re a remnant of the time when money was actually made from precious metals. People would delicately shave off bits of gold or silver from the edges — “clipping” the coin — until they had enough to make their own coins while debasing the issued coins.)

Gold is heavy, though. Eventually, the idea of a second level of representative wealth came along: Paper money or coins made from a lighter metal, both of which could be easily transported. Always, though, the promise was that these essentially valueless bits of paper and metal were backed by real gold, e.g., “I may be giving you a printed piece of paper but there’s real gold in Fort Knox.” This sense of real value was why so many Americans worried when America abandoned the gold standard — that is, when it disconnected money’s direct relationship to a precious metal.

American money now represents the collective wealth of a nation, bound up in its real property, goods, services, and even its citizens’ potential. Or at least, that’s what it’s supposed to do.

That gets me to inflation. Inflation occurs when the collective wealth remains the same but the government keeps issuing more paper money. Whenever you have more of something, it is worth less. Where it once took 50 cents to buy a candy bar, all that excess of money floating around means it now takes $5 to buy the same bar. The bar hasn’t changed, but money has cheapened because the government keeps flooding it into the marketplace.

MMT gives the government permission to flood the marketplace with money to fund its own schemes and pay its own debts. Maybe that’s a good deal for the government but for ordinary people, who are a nation’s real wealth, it’s a disaster. Their buying power devalues drastically because everything costs more.

Take Grandma Jones, for example. Grandma Jones worked hard all her life. She denied herself many pleasures during her working years so that she could squirrel away money in her savings for her old age. Imagine for this example that she saved $10,000.

When Grandma Jones retired, her monthly shopping trip for food and goods (toilet paper, etc.) cost $100. She anticipated 100 months of shopping, or over 8 years, at that rate. She assumed that she had about six years of life in her, so she’d have supplies until the end and still have something to leave to her children.

There are a lot of people like Grandma Jones in America. When they retire, they expected that their nest eggs will keep a roof over their heads and food in their tummies.

However, right as Grandma Jones stops working, the government discovers MMT and starts printing money like crazy. The available goods and services in the marketplace remain static but cash is raining down from the sky like snowflakes in a blizzard. Because each of these units of money now represents a smaller fraction of the available wealth of America, merchants raise the prices on the goods to reflect their real value.

Thanks to MMT, it now costs Grandma Jones $500 a month to buy the same supplies and, because the government is still printing away, that soon doubles to $1,000. Within less than two years, Grandma Jones has no savings at all. She applies for welfare but a lot of people are doing so as well. The system is overloaded. When she finally gets her EBT card, she discovers that its static value is also overwhelmed by rapidly escalating prices due to inflation. Soon, Grandma Jones is eating cat food. When that runs out, she lies down and quietly dies.

When the government takes money from the people to fund its own spending, that’s a tax. America’s founding was predicated on the notion that a free people cannot be taxed without representation. That’s why decisions about taxes run through the House, which, because it has elections every two years, is the chamber closest to the people’s will.

By intentionally creating inflation, the government is imposing a tax on American’s savings. The government is using MMT to bypass the laborious and unreliable process of getting the House to approve new taxes.

I’m not sure how to start, but people need to push back hard against MMT. At a theoretical level, it’s nonsense. And at a practical level, it brutally taxes those who can least afford it (people living on savings or fixed incomes), while simultaneously destroying the economy. As a start, I’d suggest writing your Congressman or woman urging that Congress immediately pass a law stopping the government printing presses.