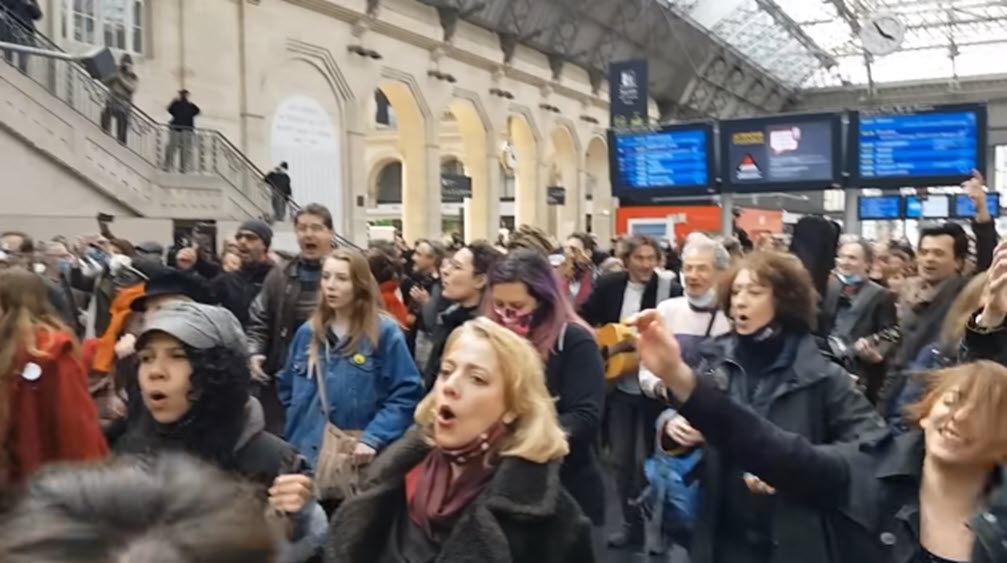 Maybe I’m beating Danser Encore to death, but I think it’s time Americans look to Europe for a way to break free from COVID restrictions.

There’s a rising phenomenon in Europe: the Danser Encore flashmob. I’ve written about the phenomenon twice at American Thinker, so you can go here and here for the details. I’ll try not to repeat most of what I said in those posts. Still, here’s a little background.

In December, a French group called HK & Saltimbank recorded a song, the lyrics of which state in relevant part

Every measure of authority
Every whiff of security
Sees our confidence vanish
They show so much insistence
To confine our conscience
Let’s not be impressed
By all these unreasonable people
Sellers of fear in abundance
Harrowing to the point of indecency
Let’s keep them at bay
For our mental health
Our social and environmental well-being
Our smiles, our intelligence
Let’s not be without resistance
The instruments of their insanity.

Somewhere along the line, the song captured French people’s imaginations and they started doing flashmobs to celebrate and demand freedom. Being French, they frame the issue as one of “culture.” Nevertheless, it’s clear what they mean. They’re not demanding that museums re-open or that there’s more opera. Instead, they are insisting upon the return of France’s day-to-day culture of getting out of the house to dance, dine, shop, and generally be free to live their lives.

Flashmobs are a much better idea than protests. Protests have to be planned in advance, they’re angry, they’re political, and they attract attention from police forces.

Unlike a protest, flashmobs must be planned in advance only as to the core people involved for singing, playing instruments, and dancing. Their spontaneity also means that counterprotesters (e.g., Antifa, BLM, or other dangerous groups) won’t be there.

Flashmobs aren’t angry. This is super important. The flashmob doesn’t yell about injustice from the Neo-Puritans who have set themselves above us with their crazy, contradictory, liberty-limiting edicts. Instead, flashmobs are about joy. If this were still high school, the masked crowd would be the uptight teachers’ pets whom everyone hates. The flashmob crowd is the one with the cool kids. They’re partying and having fun. Joy is much more attractive than anger and punitive discipline.

Flashmobs aren’t political. A protest in America about masks is inherently political. Republicans are anti-mask; Democrats are pro-mask. Independents stay away because they have become disgusted by American politics and because they’re concerned about being attacked by Antifa or arrested by the police. A flashmob, on the other hand, is apolitical. It’s about music and joy. Again, it draws people in.

The European anti-maskers, who are less constrained by the political straightjacket strangling public life in America, intuitively understood these things. The flashmobs seem to have really started in March in France, but they’re moving across Europe: Germany, Italy, Belgium, Spain, Holland, and maybe other places I’ve missed.

If you do a YouTube search for “Danser Encore,” you will get several dozen videos of flashmobs. Today — May 1 — has generated a whole new batch. Maybe May Day is significant. Perhaps the Europeans are shaking off the grim communist takeover of May 1 and returning to that date’s exuberant roots as a celebration of freedom from a long, dark winter.

If you’re wondering why I don’t go out there myself and start a flashmob there are a few reasons. First, my forte is writing. Second, I moved into my community a year ago, in the midst of the first phase of the lockdowns, and know only ten people. Third, I’m decidedly unmusical. Consider me the idea person.

And for those of you who are action people and want to do something to spark a rebellion of joy against the neo-Puritans, the song you choose has to be (a) relatively well-known, (b) apolitical, (c) easy for ordinary people to sing along with, (d) about liberty, and (e) joyous. Those are your marching orders. Armed with that, you can go forth and raise the banner of joy and freedom.

The following are the most popular flashmob videos from various European countries, along with videos from Le Huffington Post and the Journal l’Humanité:

For the following video, I made a rough translation of the singer’s explanation about the song. You can find that translation here.

And here’s a sampling of the videos that popped up just today, a chilly May Day in Europe (with more being loaded by the minute as best I can tell):

In 2021, the tables have turned. While Americans weren’t looking, socialists stole their liberty, a revolution they’re trying to lock into place with the Biden administration. Meanwhile, the Europeans are taking it to the streets to express their yearning to breathe free.