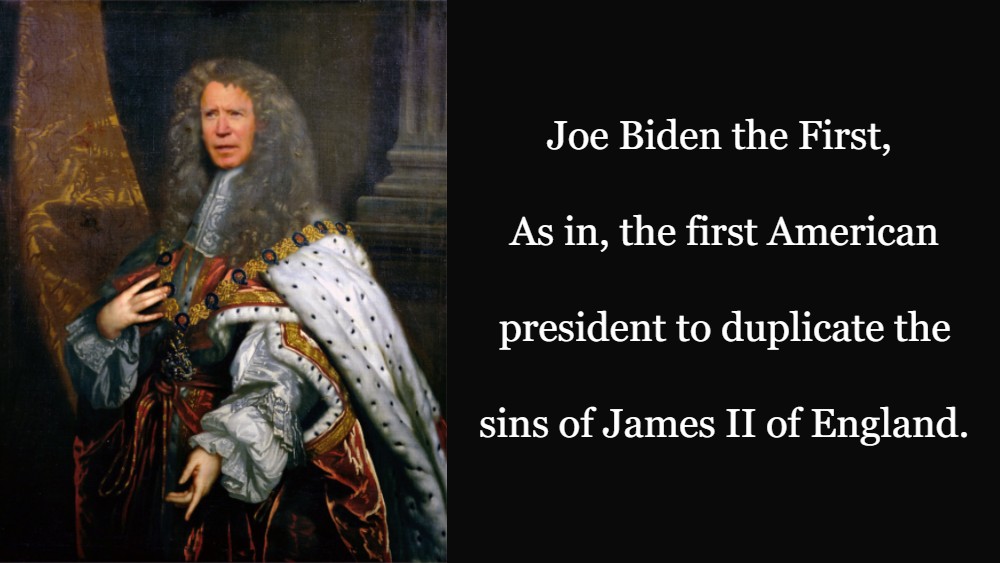 In 1688, England had its Glorious Revolution, which was glorious because Parliament kicked out King James II without firing a shot. It then invited William III and Mary (James’s daughter) to occupy the throne subject to Parliament’s rules. It articulated these Rules in the Declaration of Rights from 1689.

To the extent Americans are familiar with the Declaration of Rights, it’s because so many of the Founders were familiar with it and believed in it. The American Revolution came about in significant part because England was denying those rights to its American subjects. (Parliament responded by saying those rights were meant to limit the King, not Parliament, which is why modern-day Brits have no rights, only privileges.)

After the Revolution, the Founders continued to believe believed that these rights were inherent in all citizens, no matter who controlled the government (that is, whether King or Parliament). Therefore, when it came time for them to create America’s Bill of Rights, they looked to that 1689 template. You can view those British rights here and you’ll recognize many of them. The Founders, wise through painful experience, made clear that these inherent rights exist regardless of the form of government.

Today, though, I don’t want to talk about the Bill of Rights. I want to talk about Parliament’s 13 grievances against King James, which it included in that Declaration of Rights to justify overthrowing the old monarch in favor of a more compliant model. To the British (the Protestant British), these grievances were so overwhelming that Parliament, acting on behalf of an outraged people, willingly dethroned Britain’s second king in 40 years. They were also the same type of grievances that, roughly 85 years later, saw the colonies break entirely with Britain.

What struck me when I read the grievances is how many of them have echoes in the four-month-old Biden government:

Whereas the late King James the Second, by the assistance of divers evil counsellors, judges and ministers employed by him, did endeavour to subvert and extirpate the Protestant religion and the laws and liberties of this kingdom;

This isn’t specifically against Biden, but I don’t think anyone can argue with the fact that leftist governors and mayors across America while leaving big box stores, casinos, and other Democrat contributors open for business, waged an exceptionally aggressive war against church-going.

By assuming and exercising a power of dispensing with and suspending of laws and the execution of laws without consent of Parliament;

What Biden is doing at the Southern border constitutes the complete erase of America’s immigration laws and the very concept of her national sovereignty. And just yesterday, he granted permanent amnesty to over 100,000 Haitians for no other reason than the poverty in their home country. Biden did this by pretending that chronic poverty in Haiti was a cataclysmic event that prevents any form of safe return. I’m sorry about their poverty but that doesn’t give the President the right to do what he did. By that standard, America has to give permanent residency to every single person in every single Third World country.

By committing and prosecuting divers worthy prelates for humbly petitioning to be excused from concurring to the said assumed power;

Biden’s Democrats have been waging war against any Republican politician who questioned the past election. They’ve done this despite their routinely questioning past Republican presidential elections. In addition, they’re waging a hardcore war to remove from Congress Marjorie Taylor Greene and Rand Paul.

By issuing and causing to be executed a commission under the great seal for erecting a court called the Court of Commissioners for Ecclesiastical Causes;

This reminds me of two things: The push to create a January 6 Commission, as if an event that saw the Capitol Police murder one woman, and that seemingly saw the Capitol Police voluntarily open the doors and welcome people in, is the equivalent of the Civil War, Pearl Harbor, or 9/11. AOC has just announced that, for her, the experience was so horrific that she has PTSD and needs therapy — although this article shows how AOC reveled in leftist violence.

By levying money for and to the use of the Crown by pretence of prerogative for other time and in other manner than the same was granted by Parliament;

The Feds are printing money, which has the same effect as taxing Americans: The resulting inflation drains wealth from the savers (the middle class, the elderly), and allows the government to pay down its debt with cheap money and to fund endless socialist programs.

By raising and keeping a standing army within this kingdom in time of peace without consent of Parliament, and quartering soldiers contrary to law;

After four months, Nancy Pelosi is finally allowing National Guard troops to leave D.C. The message, though, is clear: We have the means to control every major American center and will do so if you, the People, constitute a threat to our power.

By causing several good subjects being Protestants to be disarmed at the same time when papists were both armed and employed contrary to law;

Substitute “conservatives” for “Protestants” and “Antifa,” “BLM,” and “inner-city criminals,” for “papists,” and you have the double standard of law and order that holds in America under the Democrats. Leftist protestors and criminals walk; conservative trespassers are held under lock and key in solitary confinement.

By violating the freedom of election of members to serve in Parliament;

The analogy is massive vote fraud which perverted the People’s will.

By prosecutions in the Court of King’s Bench for matters and causes cognizable only in Parliament, and by divers other arbitrary and illegal courses;

Again, the two-tiered justice system. The FBI has become a branch of the Democrat party and the DOJ provides the legal basis and the prosecutions.

And whereas of late years partial corrupt and unqualified persons have been returned and served on juries in trials, and particularly divers jurors in trials for high treason which were not freeholders;

I’ll analogize this to our corrupted legal system, one in which activist judges have read so many new and imaginary rights into the Constitution that they’re functioning as an unelected legislature.

And excessive bail hath been required of persons committed in criminal cases to elude the benefit of the laws made for the liberty of the subjects;

And excessive fines have been imposed;

The two-tiered justice system and the crazy penalties Democrats across America who put in place arguably unconstitutional restrictions on American cities imposed on those who stood against masks and lockdowns. Just think of the hairdressers, restauranteurs, and gym owners who were imprisoned, fined, or saw their businesses destroyed.

And illegal and cruel punishments inflicted;

I can’t forget the January 6 protesters who are in one of America’s worst jails while the DOJ puts together trespassing charges.

And several grants and promises made of fines and forfeitures before any conviction or judgment against the persons upon whom the same were to be levied;

Let’s just say that, back in 1688, the British people would have looked askance at Democrat governance in 2020 and 2021.

I don’t know about you, but I keep thinking of W. B. Yeat’s The Second Coming:

Turning and turning in the widening gyre
The falcon cannot hear the falconer;
Things fall apart; the centre cannot hold;
Mere anarchy is loosed upon the world,
The blood-dimmed tide is loosed, and everywhere
The ceremony of innocence is drowned;
The best lack all conviction, while the worst
Are full of passionate intensity.

Surely some revelation is at hand;
Surely the Second Coming is at hand.
The Second Coming! Hardly are those words out
When a vast image out of Spiritus Mundi
Troubles my sight: somewhere in sands of the desert
A shape with lion body and the head of a man,
A gaze blank and pitiless as the sun,
Is moving its slow thighs, while all about it
Reel shadows of the indignant desert birds.
The darkness drops again; but now I know
That twenty centuries of stony sleep
Were vexed to nightmare by a rocking cradle,
And what rough beast, its hour come round at last,
Slouches towards Bethlehem to be born?

We don’t have much of a center left, and I can’t see what’s left holding for long. And then what?

I’m not advocating for revolution. Most of us are so disconnected from the supply chain that, were American civil society to break down, we’d be dead in a month. In addition, I believe that the Constitution provides the answer to our problems: Freedom of speech. We’ve been cowed for years now by insults: Racist! Transphobic! Hater! Homophobic! Islamophobic!

Moreover, many of us have a lot to lose. I kept silent for decades because speaking up would have risked my children’s ability to function socially and academically, would have made me a pariah in my neighborhood and larger community, and would have deprived me of an opportunity to earn my living. That’s life as a conservative in a blue community. Fortunately, my kids are grown, I’m in a new community, and I make a living being an opinionated conservative.

Because I know the constraints on so many conservatives, I also know how much I’m asking of you when I say that the time for polite retreat is over. If you can, safely do so speak up. Push back. If you can still earn a living, take the risk of losing those friends. You’ll feel remarkably free once you do so. Hiding your true self around censorious friends proves only to be a simulacrum of friendship.

The left is dominant because it yells, screams, and pushes harder and louder. We can do the same, all the while staying strictly within the rule of law. However, unless we make our presence known, the left will continue to rule as if we don’t exist.

And use the power of the marketplace, of course, again subject to the reasonable limitations of your own life. No more Disney! No more Coke! No more any woke company that you can manage without. And please, try to buy from and patronize American companies that aren’t woke.

Exercise your Second Amendment and get armed. It’s expensive now (both weapons and ammo) but do whatever you can. Even if you don’t see yourself ever using it, buy it, take a class in gun operation and safety, learn how to use it, and keep it safe, if only to make a statement.