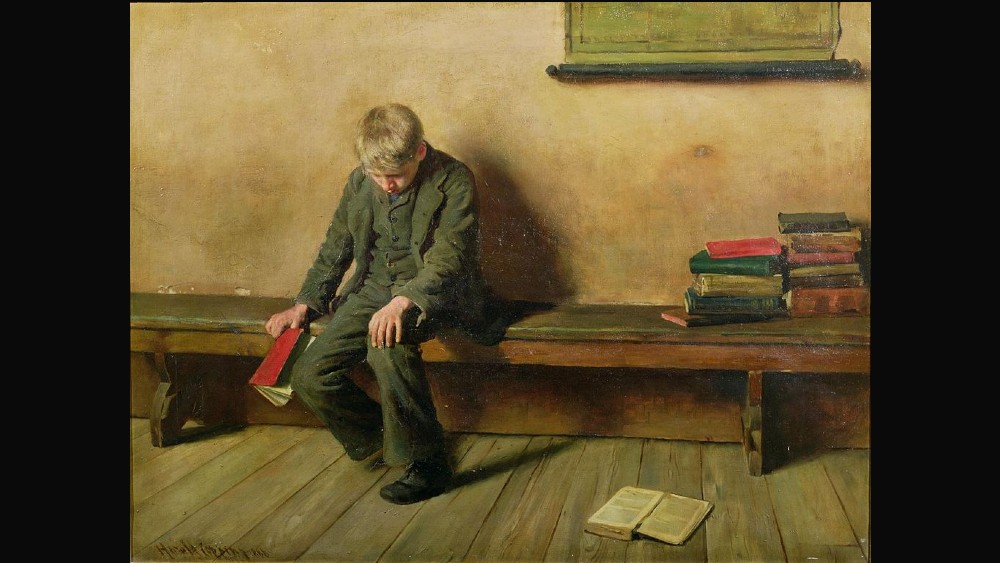 With their headlong, power-made rush to obliterate standards, progressives are destroying the people they purport to represent.

Societies set standards for a host of reasons, though two are primary.  First, standards, whether civil or legal, allow us to measure objective reality.  For instance, the purpose of standards, such as school grading, is to identify the relative skill of people in a particular endeavor–with the endeavor in schools being the ability to read, write, and reason.  Second, and flowing from the first, standards allow us to identify those people who excel in that skill set and promote them and, as a corollary, to find and help those who fail to meet the standard. Moreover, the effectiveness of particular efforts can be assessed.

Everything in the above paragraph is either antithetical to, and under direct attack from. progressive leftists. They have no desire to identify objective reality.  They have no desire for a meritocracy.  They have no desire to assess the effectiveness of any efforts they embrace to address supposed problems.  Their goal is not to benefit society by upholding a meritocracy or, at the other end of the scale, to help those they claim to want to help. Instead, they simply want permanent political power in this country.  Everything else is secondary.  And to accomplish their real goal, they invoke the charge of “systemic racism” to attack standards and the facts that inform those standards.

“Systemic racism” is a meaningless charge.  All it means today is that blacks or women perform worse at a metric than others.  The progressive left holds that up to mean that the only possible cause of such a fact is that racism is at the root.  It is a toxic attack on this nation by the people who would destroy it and rule over the ruins.

Like the Marxism that progressive idiots knowingly or unknowingly embrace, progressives uniformly rail against objective reality whenever and wherever it challenges their ideological shibboleths.  For example, blacks commit violent crimes at a hugely disproportionate rate to their representation in society.  The progressive assessment of this unquestionable fact is to claim that it is only because of some amorphous systemic racism.  Yes, they allege, with no factual proof, that every institution in American society not affirmatively espousing progressive victimization values — that being their justification for altering society outside of the ballot box and the Constitution — is inherently racist.  Indeed, anyone who shows the undisputed facts is shut down as supposedly racist.

No example showed any of this better than in 2017, when at Claremont McKenna College, the progressive left and those of their number who were radicalized blacks, combined to stop Heather MacDonald from speaking on campus.  As I wrote then:

Ms. MacDonald has been researching and speaking on law enforcement issues for three decades and has proven an erudite critic of the Black Lives Matter crowd and their progressive enablers in the past administration.

In other words, Ms. MacDonald was about to speak to objective reality.  The progressive left, unable to challenge the facts that showed the complete and utter fatuousness of their position, violently stopped her speech.  Claremont McKenna’s eunuch of a college President, David Oxtoby, then held no one liable — teacher, student, administrator, or the campus police directly involved in shutting down Ms. MacDonald — but he bemoaned the lack of freedom of speech on his campus.  Several black victim studies students then penned an illuminating essay in response to the eunuch that you can read in its entirety here.

The students embraced that central toxic tenant of the progressive movement, Foucault’s (may he roast in hell) post-modernism; namely, that there is no such thing as objective fact.  Under the student’s Foucaultian, post-modern interpretation of reality, objective reality does not exist.  Their subjective take on what they want reality to be is, they asserted, is even more valid than Ms. MacDonald’s and, because of that emotional basis, everybody must accept their “facts” as reality. It is insane and the people who taught this doctrine to their students should be run out of academia on a rail.

This insane progressive toxin now largely holds sway, not merely in academia, but in the real world as well. For example, our Vice President embraced it when a student spouted a manifest untruth about ethnic cleansing in Israel, the only pluralist nation in the Middle East, and Kamala’s response was to accept that statement as “your truth,” which must  not be “suppressed.”

This willing embrace of nonsense has very serious real-world consequences.  If we go to a doctor with cancer and he ignores the cancer but treats us instead for irritable bowel syndrome, it will be wholly ineffective, at best, and deeply counterproductive and possibly life-threatening, at worst.

So it is with every aspect of progressivism.  Let’s first look at the criminal justice system.  We have been treated over the past few years to politicians and prosecutors claiming that all aspects of our criminal justice system, from bail to holding blacks liable for the crimes they commit, are “systemically racist” and must be destroyed by whatever means necessary.

That usually means justifying and accomplishing this destruction with a mandate from only a decidedly minority-in-numbers violent mob and a few deeply corrupt prosecutors and politicians.  That has extreme consequences.  This from Breitbart:

The numbers are in, and the debate is over. Our nation is in the midst of one of the worst crime waves in American history.

New nationwide data from the Federal Bureau of Investigation reveals that last year the number of murders rose by 29 percent, drug overdose deaths increased 30 percent, and the number of gang-related killings skyrocketed more than 55 percent. To put this carnage into context, a 29 percent increase in murder isn’t simply bad, it’s the worst single-year increase in American history. Similarly, the drugs flooding into our communities aren’t only deadly, they are the deadliest drugs ever sold. For the first time ever, over 100,000 Americans lost their lives to drugs and homicide in 2020.

The number of assaults rose by 12 percent last year and criminal assailants committed nearly 75,000 more violent crimes than they committed in 2019. Although the total number of property crimes fell, the total cost of those crimes rose by nearly $2 billion. Recorded cases of arson also rose by nearly 35 percent, a trend that is likely associated with last summer’s BLM riots, which were the most destructive in American history.

In Democrat-dominated cities, violent crime rose far more than the national average. Last year, murder rose 50 percent in Chicago, 44 percent in New York, and 38 percent in Los Angeles. The murder rate in Baltimore was higher than El Salvador’s or Guatemala’s — nations from which citizens can claim asylum purely based on gang violence and murder.

Initial estimates also reveal evidence of a shrinking American police presence. Even though the FBI gathered data from over 100 additional law-enforcement agencies than it did in 2019, it estimated 1,000 fewer police officers. This isn’t surprising; 86 percent of police chiefs report being short-staffed. Between April 2020 and April 2021, the rate of hiring in mid-sized departments dropped 29 percent and plummeted 36 percent in large departments. Equally concerning, initial data shows that the number of police killed by criminals has increased 46 percent compared to this time last year.

For months, the media has tried to deny and downplay this disaster because they know Democrat mayors, progressive prosecutors, and liberal governors are to blame.

And what we have seen happen relative to the criminal justice system is happening with equal force to public education in America.  Public school education is. first and foremost, the single most important money-laundering operation for Democrat politicians.  As such, Democrats — and the black grievance industry that supports them — invariably try to maximize funding to public schools, ostensibly to help black children.

Yet black children have been moving backward against color-blind standards ever since that inveterate racist, Lyndon Baines Johnson, introduced the so-called “Great Society.”  No group is more ill-served by public education than blacks.  For instance, here is one plaintive cry from a black educator in California:

Because we want our children and grandchildren to be ready for college, NAACP members like me have chosen tuition-free public charter schools. But instead of protecting our rights, the NAACP is going along with labor unions and trying to shut down our schools.

I am an NAACP member, mother of three, grandmother of seven, aunt of 14 and an advocate for all African American children, whom my school district consistently and persistently fails. I believe the NAACP should be suing the state of California for “educational malpractice” on behalf of African American students statewide.

Instead, they are on the wrong side of a debate about parental choice. That’s why my NAACP branch in San Bernardino recently passed a resolution to overturn the NAACP National Board’s call for a charter school moratorium.

California’s traditional, government-run public schools have a terrible track with Black students. Test scores from 2018 showed a full 80% of Black kids in California can’t do math at grade level and 68% can’t read or write at grade level. That failure to educate our children leads to incarceration and other problems that continue to plague our community.

Shutting down charter schools that are better serving 50,000 of California’s Black kids doesn’t make sense. A reasonable position for the NAACP would be to hold all public schools accountable to the same high bar, charter and district alike.

But the opponents of charter schools have abandoned all reason. . . .

So, it is no surprise whatsoever that the latest from progressives is not a thorough analysis of why public schools are failing blacks — Thomas Sowell has already done that, by the way, in his 2006 book, Black Rednecks and White Liberals.   Rather, the latest from the left is to erase the standards by which teachers can assess whether students meet minimal standards.  This from Johnathan Turley:

Do grading systems need a “failure” option? That is the question being increasingly asked in schools across the country.  The latest school to eliminate the F is Sunrise Park Middle School in White Bear Lake, Minnesota which posted a videotape on a new grading scale which does not allow for any grade below 50 percent. It also bans the use of a student’s behavior or class record to be considered in grading.

One of the areas of the greatest attention in recent years for anti-racism reforms in schools has been grading and testing systems. Whole university systems have abandoned standardized testing as inimical to minority advancement while secondary school systems have eliminated expulsions due to disruptive conduct, removed proficiency requirements in Math and English, and eliminated advanced programs for learning.

In Minnesota, District Superintendent Dr. Wayne Kazmierczak has campaigned for grading reform. He has argued that “grading can be one of the largest areas in which systemic racism and inequities are perpetuated,” according to the school website.

That view is reflected in the YouTube video by Principal Christina Pierre and Associate Principal Norman Bell who insist that the emphasis should be on what a student knows and not how they behave. Moreover, they explain that there will no longer be failing grades as shown on the new grading scale . . .

None of this is in the best interests of blacks who have been utterly failed by progressives using them as expendable fodder to achieve political power.  Indeed, can somebody explain to me how the hell this in any way improves the performance of failing black students?  This is the criminal destruction of black lives.

If black lives really mattered, then the left would be concerned about how to raise them to standards, not how to hide their Democrat-created ability to meet those standards. The progress these leftist pieces of human garbage are promoting is either consciously evil or so divorced from reality as to be a clear and present danger to this nation.