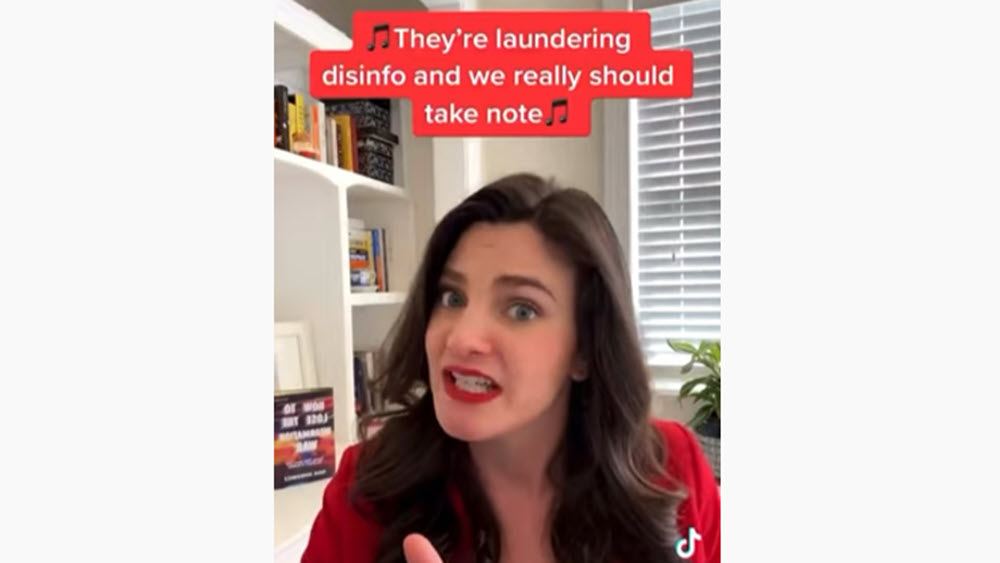 I know that Nina Jankowicz, the new director of the DHS’s Ministry of Truth reminds me of someone….

The Biden administration has installed Nina Jankowicz as the director of the Department of Homeland Security’s amazingly unconstitutional and quite Orwellian Disinformation Governance Board. Jankowicz proves to have a history of believing every leftist lie, disseminating it as far and wide as possible, urging that anyone who disagrees with her be silenced, and especially wanting to silence men. She also has a creepy fetish for Harry Potter. Whenever I see her, she reminds me of someone.

At the shallow, superficial, and silly level, I finally figured out who pops into my mind whenever I look at Nina Jankowicz. You tell me if I’m right or not:

More seriously, Jankowicz reminds me of one of the more repugnant characters in the Harry Potter series: Dolores Umbridge. Although Wikipedia is a disgrace for anything even remotely political, it’s still useful for things such as describing literary characters and it did a good job with the Umbridge character (hyperlinks omitted):

Umbridge is depicted in the novels as being an evil, cruel, strict, despicable woman who represented the worst of political power, under a saccharine image filled with kittens, fluff, and girlishness. She is implied to be sadistic and overwhelmingly corrupt, to the point of finding joy in torturing students. Harry describes Umbridge to Sirius Black, saying that she’s vile enough to be a Death Eater, despite not being one herself.

Umbridge is also depicted to be a prejudiced person, despising half-breeds and Muggle-born witches and wizards to the point of firing Hagrid due to his half-giant status. She displayed her intolerance to the centaur Firenze, shouting racial insults towards the herd of centaurs that confronted her in the Forbidden Forest. Umbridge was a “pure-blood supremacist” and attempted to mask her half-blood status, often lambasting her Muggle mother and Squib younger brother.

Dolores Umbridge was eventually imprisoned in Azkaban due to her crimes against Muggle-borns during her interrogations, as not everyone she interrogated and tortured survived.

If you strip away the fantasy aspects of the Umbridge character, you are left with a bureaucrat who hides an incredible lust for power and a sadistic desire for control under a nauseatingly saccharine presentation. She also has no compunction about using her government power to destroy those she deems her enemies.

The comparison first popped into my mind (pun intended) when I watched the horrific video of Jankowicz doing her evil little Mary Poppins tune calling for censorship. (And the less said the better about Jankowicz’s singing. She makes my teeth itch.)

The moment I saw that sickly sweet presentation telling lies and calling to silence those who have long-since been proven to speak the truth (especially about COVID), Dolores Umbridge popped into my mind. That association became even stronger when I saw another terrible Jankowicz performance, this one featuring a grown woman dreaming of sexual congress with Harry Potter, aged 11-17, depending on which book you’re reading or movie you’re watching:

I know that’s meant to be a comedy song but it’s not funny enough to make up for the yuck factor. Still, it is useful for the Harry Potter-Dolores Umbridge nexus.

And then there are Jankowicz’s prejudices, which are every bit as extreme and unreasonable as Dolores Umbridge’s. Jankowicz believes that the people of whom she approves (and I’m betting it’s only progressives and no one else) can edit tweets — any tweets — to “correct” any “misinformation.” In other words, she’s hatching an idea for censorship. And while Jankowicz frames this plan as something coming from Twitter itself, the idea and the impetus would be the government’s:

Only “trustworthy” people like Nina Jankowicz should be verified on Twitter and able to add context to other people’s tweets. pic.twitter.com/nsquSNJRyI

Another example of Jankowicz and her misinformation mania is the fact that a Senate report about Ukraine that touches upon Joe Biden’s (and, I’m guessing, his son Hunter’s) relationship with that corrupt country is what she terms “misinformation.” Presumably, she dreams of using her new government position to censor Congress:

Nina Jankowicz was asked about a Senate committee report on the Biden family’s involvement in Ukraine.

She accused the Senate committee of spreading disinformation. Seems like some Senators should want to ask her about this. pic.twitter.com/Rtb0OboKiC

Jankowicz also calls it disinformation that Kamala Harris slept her way to the top. That’s an exaggeration, maybe, given that Harris only slept her way to the lower-middle thanks to her long-time relationship with California’s power politician, Willie Brown. Brown also continued to be Kamala’s Svengali long after their sexual relationship stopped. My guess is that one of the reasons Harris so disastrously bad as Veep is that the White House cut off her relationship with the brilliant Brown. But really, should a government official be the one telling us what’s true and what’s not, and how to analyze the available information?

Nina Jankowicz – “Gender disinformation is a threat to national security.”

What is gender disinformation you ask? pic.twitter.com/6ekomXJLoY

And of course, there’s her belief that men need to be silenced.

If you want more insights into Jankowicz’s sweet-voiced censorship and ugliness, check out the Maze Twitter account.

I’ll leave you with Imelda Staunton’s splendid acting as Nina Jankow…er, Dolores Umbridge. Number 9 in the countdown is eerily familiar. Add a little singing and the two could be twins: