This is my end zone dance because I was correct in my earlier post about Kanye West’s antisemitism.

Yesterday, I wrote a post about Kanye West’s appearance on Tucker Carlson. In the post, I warned conservatives against getting too excited about West. He’s not a conservative ally. Among other things, I pointed to his use of a nasty little antisemitic trope. Over the weekend, he went full antisemite. I wrote a post for the American Thinker about his coming out in full antisemitic glory so, rather than reinventing the wheel, here’s my American Thinker post, which I’m reprinting in full:

Over the weekend, Kanye West went full antisemitic. I was not at all surprised. Kanye’s incoherent attack on Jared Kushner during his interview with Tucker Carlson gave the game away. By the way, what he shared on Instagram and Twitter over the weekend is not open to interpretation, as in “is he or isn’t he antisemitic?”—instead, it’s big, it’s bold, and it’s openly, unabashedly antisemitic.

It began on Friday when Kanye was kicked off Instagram, although it’s unclear whether it was for his antisemitic rantings or for something else. The rantings arose in the context of a private conversation he’d had with Sean “Diddy” Combs, which Kanye then apparently published to Instagram. Here’s the Instagram language: 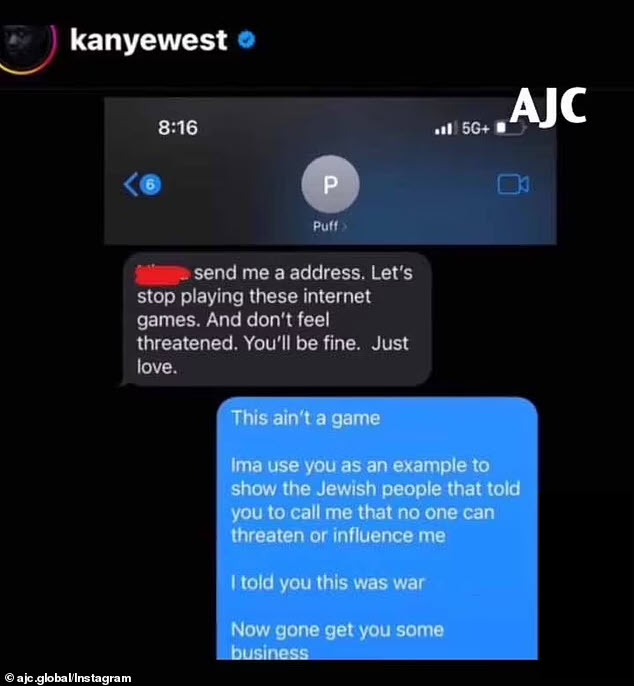 This ain’t a game

I told you this was war

Now gone get you some business [sic]

Clearly offended by whatever Diddy told him, along with the Instagram experience (and Instagram, recall, is owned by Mark Zuckerberg’s Meta), on Saturday, Kanye escalated the antisemitic attacks in a Twitter tweet vowing to go after Jews. Twitter has since deleted the tweet, saying it violates its rules, but it lives on as a screen grab:

I’m a bit sleepy tonight but when I wake up I’m going death con 3 [sic]   On JEWISH PEOPLE  [sic]  The funny thing is I actually can’t be Anti Semitic because black people are actually Jew also  [sic] You guys have toyed with me and tried to black ball anyone whoever opposes your agenda.

The subsequent tweet he made on the same subject is still there, but I’ve screen-grabbed it just in case:

As you can see from that screen grab, the tweet already has over 200,000 likes, and that number is going up by the minute.

There are a few strands to unwind here:

First, second only to Muslims, Blacks are the most antisemitic people in America. While the left loves to talk about teeny little pockets of “White Supremacists,” that’s not where American antisemitism is coming from. It’s coming from Blacks. (Interestingly, while the above link comes from a 2016 survey by the Anti-Defamation League, by 2020, the ADL, which has become a hard leftist organization, left out race entirely when studying antisemitism.)

Second, “replacement theology,” to which Kanye alludes, is a real thing when it comes to Jews and some Christians (and Kanye waves his newfound Christianity around like a cheerleader’s pompoms at the big game):

Third, Blacks are especially enchanted by “replacement theology,” as you can see from Kanye’s claim that “I actually can’t be Anti Semitic because black people are actually Jew also.” While I’m sure you remember the way the leftist media defamed Nicholas Sandmann in 2019 for patiently and quietly accepting drum abuse from Nathan Phillips at a Right to Life March in D.C., you may not remember that Black Hebrew Israelites had been hurling racial abuse at the boys before that. That organization is the apex of replacement theology amongst Blacks, and it’s very hostile to Jews.

Fourth, if you were paying attention to Kanye’s interview with Tucker Carlson on Thursday, Kanye’s antisemitic ranting is unsurprising. On my blog, I mentioned it as just one of many reasons that I was unimpressed by Kanye and warned other conservatives to be less impressed as well:

[I]n a perfect, albeit incoherent, antisemitic trope, Kanye said that Jared Kushner’s huge efforts in the Middle East, which led to the Abraham Accords, were all about money. That kind of remark stinks and is as bad as Ilhan Omar saying the only reason Republicans support Israel, the only liberal democracy in the Middle East, is because Jews buy them off.

Kanye has made a lot of money giving the American public bad music and ugly clothes. His talent eludes me, but young people clearly see something in him. That’s too bad because, despite the faint gloss of conservativism he’s adopted (which I suspect is opportunistic or, at least, doesn’t come from a truly moral place), Kanye is a sinkhole of so many bad things that happen when leftism and Blacks come together.